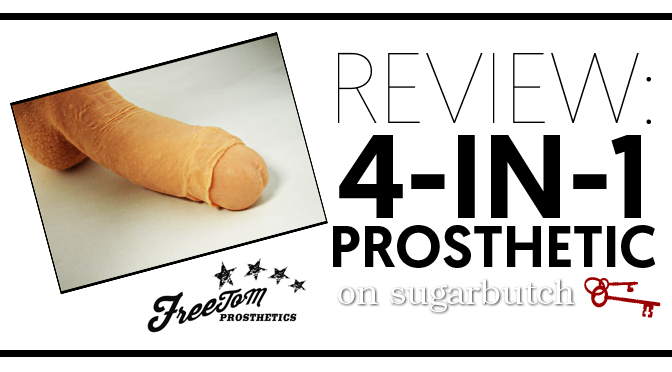 I don’t usually review or play with very many “prosthetics” because, well, I’ll be honest: they are usually incredibly expensive. But recently I’ve noticed a growing market of (what I’d call) strap-on cocks, pissers, packers, and other penis-like tools that are marketed to transgender men as prosthetics, and as someone very curious about strap-ons and strap-on technology, I eventually had to try at least one of ’em.

So, I did a bunch of research (on Tumblr, mostly) and found the one that intrigued me the most: The FreeToM 4-in-1 Natural.

This prosthetic is made of medical grade silicone, and designed to have four functions: packing, peeing, playing, and pleasure. It is very soft, more like a packing dick than the usual silicone strap-ons that are made for fucking, and it folds easily in the center to pack more easily. It comes with a small, hollow rod that bends, which is insertable into the back of the dick through the hole in the center of the shaft, which makes it harder and able to fuck (play) with. It has a cup-like structure that fits against the body with a hole through the center of the shaft, so it’s able to be used as a stand-to-pee (STP) device. And the side that sits against the body also has a “pleasure slide,” textured silicone on the underneath that is meant to stimulate the wearer. 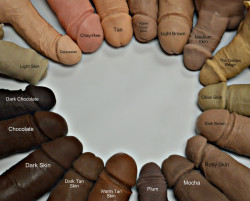 It comes in all kinds of colors. In fact, that would be my number one suggestion for folks interested in making the investment and getting one of their own: definitely order the color samples pack so you can get the precise match for your body and skin tone. I made an educated guess based on holding my forearm up to the computer screen plus what I read online (particularly that most white folks are more pink than they think), and I’m pretty happy with the color I ended up with, but I think a different color might be even more accurate, especially because genitals are often darker than skin on other parts of the body.

(When I order another one, I’ll definitely order the color pack first. Note I said when, not if.)

FreeToM offers a Paint Plus Upgrade Service, and the photos of their prosthetics that have been painted are incredibly impressive. I wasn’t sure it would be worth it to spring for the extra $80 to get it painted, but considering the high quality and how this dick has been a pretty serious game changer for me, I think it might be. The veins look amazing, and the head of the dick is much more realistic.

I spent quite a while browsing through the FreeToM website before I decided on this particular model, the 4-in-1 Natural. They also have a pack-and-play model that doesn’t have a ‘pleasure slide,’ and a 4-in-1 that is circumcised, as well as some smaller packing versions. But this one had a little bit of everything, which is what I wanted.

So this is what I ordered:

Want to see some photos? 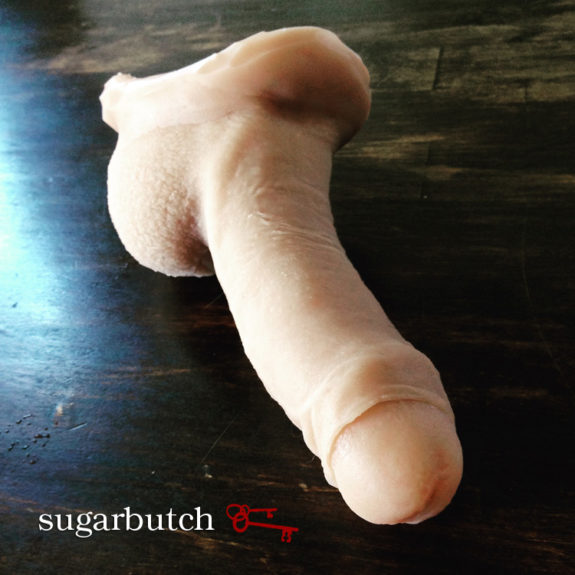 From the website’s description:


The All NaturAL 4 in 1 prosthetic is 6 1/2″ in length and tapers off to 5 1/2″ in girth. The testicles and foreskin on this prosthetic are everything! It’s functions are: pack, pee, play and pleasure. It was deliberately designed to fold in the middle, to make packing much easier and has a sturdy enough cup for urination. All of our prosthetics are molded off of volunteer cis males for an ultra realistic look an the All NaturAL is definitely the most realistic prosthetic we sell! The hollow rod that comes inside the prosthetic is acid, fungal and bacteria building resistant. All hollow rods inside are removable for proper cleaning and sturdy enough for play. The hollow rod inside also allows you to bend the prosthetic in whichever position you’d like and can also be bent downward for comfortable packing. The FtM Pleasure Slide is also molded into the prosthetic itself and was designed to slide up and down the FtM genitalia. The All NaturAL is the most efficient prosthetic we sell and because of that, it’s a tad more expensive.

Let’s talk about how it works & what it’s like

Holy crap, this dick. I’m not kidding when I said it is a game-changer … other strap-on models just aren’t as interesting anymore. I love the softness of this one, I love how it feels when I wear it, I love how much I can feel a blow job through the suction and the hole through the shaft of the dick.

I keep using the word “juicy” about this dick, and it’s not (only) because it makes me wet, it’s also because of the way some of the model is hollow, so it has this … squish to it that is just awesome.

The colors are amazing, the quality is high, the texture is fantastic. It is so good for blow jobs. If you are into blow jobs, I highly recommend this dick.

rife told me it’s his second favorite dick to suck, his first favorite being Shilo by the New York Toy Collective. He also said he particularly likes it because I can be as rough as I want with it, and because it’s so soft (but still silicone!) he can take it and it doesn’t poke him the way some harder silicone does.

Let’s not beat around the bush: It’s huge. I ordered the 6.5″ because it was the only one that came uncut, though there are a few other models of the 4-in-1 that are smaller, and I would highly recommend going for something smaller than 6.5″ if it is primarily going to be a packing dick for you.

It is hard to pack with. Not impossible, but it feels very different and very noticeable. The balls and the cup are very, very large, bigger than the palm of my hand, and very bulky. It sits well in my (baggy) pants, and it does fit between my legs, but wearing it in that place has been taking some getting used to (I’m much more used to wearing a packing dick in front of my body, rather than under my body).

It’s also kind of hard to strap-on and fuck with. Maybe I just haven’t used the right harness yet (I think the SpareParts Joque would be particularly good for it), but it’s been hard for me to keep it in place. Because it’s so squishy, it moves around a lot and edges its way out of the places I want it to be. Also, I like pretty rough sex, and because it’s so soft, it is not the best at that.

I need more practice using it as a STP device, and I think generally it does quite well with that, but because the space inside of it is quite large, it feels a little bit messy. My favorite STPs are still simple and sleek, and this one feels like it’d need rinsed every time, which is a challenge in public restrooms or when using elaborate harnesses.

The other major con for this dick is the price. It’s a serious investment. They do have some pre-made and pre-painted models, which are not custom made when you order them, which have the benefit of shipping faster and also of being a bit more affordable. They also have a clearance section, so if you have your heart set on something from FreeToM and you just can’t afford to get one, definitely stalk their clearance and pick something up there.

Regardless of it’s limitations, it is a pretty incredible tool and toy. If you’re even half as into blow jobs and packing and strap-ons as I am, I bet you’d love this.

The All Natural 4-in-1 prosthetic from FreeToM was not sent to me to review, it was purchased of my own free will because I wanted it for myself. If you buy one, tell ’em I sent you?