Two of my favorite butches on the planet – and the fabulous addition of femme Anna Camilleri – have collaborated in a queer performance collective. This clip from earlier this year is fucking rad.

SWELL—the new incarnation of Taste This, notorious Vancouver-based queer performance collective. In 1994, four young East Vancouver artists—Ivan E. Coyote, Anna Camilleri, Lyndell Montgomery, and Zoë T. Eakle—came together to conduct an experiment. All four had been performing solo on small stages, and they wanted more than a ten-minute spot sandwiched between the fire breather and the sound poet. They founded queer performance troupe Taste This, and premiered their first full-length project at the Edison Electric Gallery. 100+ people were turned away at the door. Artistically emboldened by the response, they took the show on the road to Seattle, Portland, and San Francisco, and then continued to create and tour a total of four stage works in Canada and the US, until disbanding in 2000. Notably, Taste This released Boys Like Her: Transfictions (Press Gang Publishers, 1998) to critical and public acclaim, including a 1999 Book of the Year Award from Forward Magazine, an American Library of Congress Award nomination, a Community Service Award for Achievement in the Arts by Xtra West, and in 2008, Boys Like Her was included in the Queer Canadian Literature Collection at the University of Toronto. With over a decade of artistic experience to their individual credit, Camilleri, Coyote, and Montgomery recently started talking about resurrecting the kind of magical collaboration that Taste This was. A lot has changed, but the issues that the early collective inhabited are still relevant in the contemporary artistic and political landscape. Questions of gender, class, sexuality, rural versus city life, and family dynamics continue to attract the attentions of the three artists. For the premiere of “So The Story Goes”—an original, full-length inter-discipline performance work—they’ll be joined by acclaimed artist Leslie Peters. 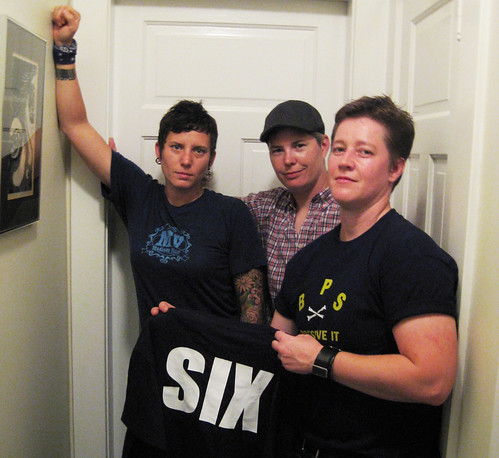 Thanks to Ivan’s partner Zena for snapping this shot and sending it to me (and telling me I could post it).

Take a minute to read Hats Off To Beautiful Femmes, a bit of a follow up to Ivan’s recent Butch Roadmap column. And happy birthday, Ivan!