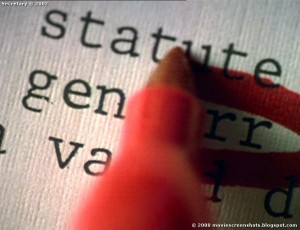 It’s a little thing, and it really doesn’t matter that much, what matters the most is that someone has seen this little space on the web of mine and likes it enough to link back to it in their own little space on the web. I’m always touched when I find Sugarbutch linked from a new place. So I’d never email somebody and be picky enough to say, “Hey, thanks for linking me, but will you change your capitalization?” 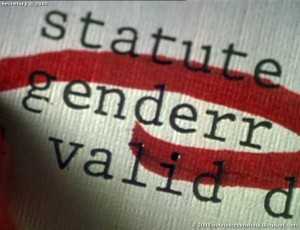 (I love how you can see the paper texture here, how the ink is just a little bit smeared. And that the word is “gender,” of course. So hot.)

But I always, always write this site name as “Sugarbutch,” so I’m not sure why people change it. The heading, the page title, the blog title, any comment I leave – it’s all one word. I admit, it’s a pet peeve of mine. I’m a grammarphile, after all. An English major. It’s not just the bad grammar that bugs me, but also the not calling things the way they want to be called, and lack of attention to detail.

Maybe other sugarbutches write the word differently and have different philosophies about why they capitalize or don’t capitalize the letter B. I don’t claim to have made up the term, but when I started using it, I’d never heard anyone else use it before me.

The way I see it, sugarbutch is a compound word. Part of why it is important that it is a compound word, why the B in butch is lowercase, is because the poetic meter of the phrase is a dactyl: the emphasis, when said, is on the first of the three syllables: SU-gar-butch CHRO-ni-cles. Adding a capital B gives the impression that it should be cretic: SU-gar-BUTCH CHRON-i-CLES, or, worse yet, that the “sugar” and the “butch” are separated completely: SU-gar BUTCH.

There’s a reason for the lowercase b, is what I’m saying. 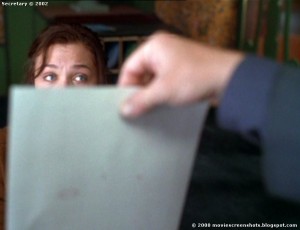 (Thanks to the Movie Screenshot blog for the stills from Secretary.)

The red pen scenes always remind me of watching the film Secretary with The Ex. After she saw it for the first time, a few weeks later – it may’ve been our anniversary, or some such event, because I was definitely dressed up, and had brought flowers – she gave me two small gifts: one was very nicely wrapped small box, and in it was chewed up gum and pencil shavings. The other was a red Sharpie with ribbons tied around it.

Just remembering that moment where I opened the box makes something stir in my pelvis, some sort of heat of power. Sometimes she really knew how to play with me, how to get me going. It was so exciting, in the beginning.

When I opened these gifts I was in her office – she was the president of the queer student government group on my college campus, of course she was – and I locked her door, punished her, and fucked her on her desk long enough for us both to miss our next classes.

In the aftermath, we were tidying up, laughing, trying to listen to see how many people were in the adjoining lounge to figure out whether or not they knew we were in the office, and she took my hand and said, “Since I moved into this office I wanted to be fucked on this desk … thank you.”

One of my favorite moments of sex with her. Jeez, it’s so good in the honeymoon phase, isn’t it?