This is part a series (2 of 3) of trailers & write-ups about documentary films about gay marriage.

Watch the trailer for the Tying the Knot documentary: 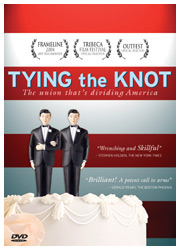 When a bank robber’s bullet ends the life of police officer Lois Marrero, her wife of thirteen years, Mickie, is honored as her surviving spouse but denied all pension benefits. When Sam, an Oklahoma rancher, loses his beloved husband of 22 years, long-estranged cousins of his late spouse try to lay claim to everything Sam has. As Mickie and Sam’s lives are put on trial, they are forced to confront the tragic reality that in the eyes of the law their marriages mean nothing. From an historical trip to the Middle Ages, to gay hippies storming the Manhattan marriage bureau in 1971, Tying the Knot digs deeply into the past and present to uncover the meaning of civil marriage in America today.

TYING THE KNOT is a journey through 5,000 years of history with marriage in mind. Didn’t princes and princesses used to live happily ever after? Author EJ Graff corrects some myths and fairy tales that the Extreme Right has been spinning as of late.

For example, did you know:
• Marriage has been a constant battleground and has changed many times to reflect the values of society?
• Marriage had no religious significance even in the Catholic Church until the Middle Ages?
• Protestant churches have split a number of times over issues related to marriage?

Are these quotes from the 2004 Republican National Convention?
• “This sort of marriage is not in the best interest of children.”
• “God has a plan for marriage and this isn’t it.”
• “Allowing this kind of marriage will pave the way for all sorts of moral depravity.”

In fact, these arguments were made about marriage between a man and a woman. In TYING THE KNOT civil rights attorney Evan Wolfson tells the love story of Mildred Jeter and Richard Loving, who fought a long battle with the Commonwealth of Virginia for the right to marry. The year was 1962. Mildred was black and Richard was white, but their loving lives together were anything but simple.

—
I haven’t actually seen this film – if you’ve seen it, please do leave a comment and what you thought about it, or write it up on your blog and leave a link.

8 Against 8: 8 lesbian bloggers – 8 days – raising as much as it takes to defeat Proposition 8 in California. Vote NO on Proposition 8!

One thought on “8against8: Tying the Knot (documentary)”