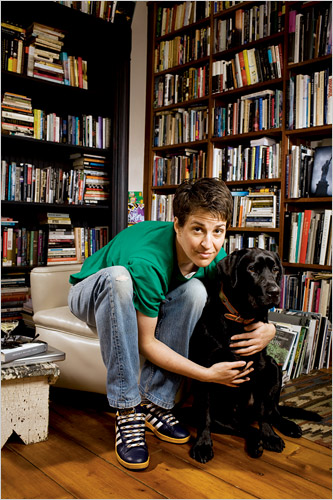 But I can’t resist. There are some new photos from the New York Times Magazine interview, A Pundit in the Country, and I’ve done a bit more of my homework.

First! Two things you should know:

And now: the butchest interview in the history of butch interviews. An excerpt from the recent New York Times Magazine article:

Always on her: A handkerchief. One of my liabilities as a broadcaster is that I am little teary. Having a handkerchief is handy. My partner, Susan Mikula, buys me cute ones.

Always in fridge: Champagne. I always keep a bottle, because you might need to celebrate at any moment, and a bunch of mustard, because I am a mustard person.

Clothing item a talk-show host needs: For me, it is sneakers, which I can wear 80 percent of the time, secretly behind the desk. That reminds me who I am, even though I am dressed up like an assistant principal in order to meet the minimum dress code for being on television. 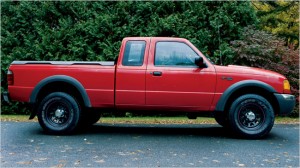 She drives: I have a seven-year-old Ford pickup. Remember, I have to go to the dump.

Hobby: I am a hobbyist bartender. I have a liquor cabinet. I research classic drinks from the golden age of American cocktails and I make them for me and Susan.

Favorite obscure liquor: Rhum agricole. It is rum made from sugar-cane juice rather than molasses. It is freaking awesome.

Hat tip to the femme top, who pointed me toward the following story which describes how Maddow met her partner, Susan Mikula.

Maddow walked into her life after Mikula told mutual friends she needed a “yard boy” to help her manage the demands of a creaky old structure that had stood empty for almost a year as well as the 2 acres of vegetation that were threatening to take over.

“Zing went the heartstrings,” according to both of them, when Maddow, 31, a Rhodes Scholar and gay activist, arrived for the job. Maddow had moved to the area to write her doctoral dissertation comparing AIDS policies in the California and British prison systems, but also needed to earn some money. A year-and-a-half later, on Halloween, she moved in. 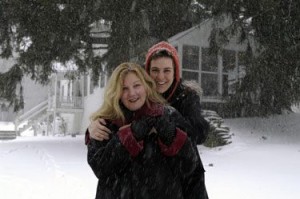