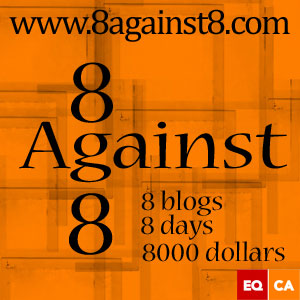 This marks the beginning of 8 Against 8, where 8 lesbian blogs are writing for 8 days against Proposition 8 in California which would render same-sex marriage illegal and raising a goal of $8,000 to defeat the initiative.

Aside from me, the other 7 bloggers participating in this 8 Against 8 are Grace Chu and Grace Rosen at Grace The Spot, Lori Hahn at Hahn At Home, Kelly Leszczynski at The Lesbian Lifestyle, Dorothy Snarker at Dorothy Surrenders, Pam Spaulding at Pam’s House Blend, Riese at This Girl Called Automatic Win, and Renee Gannon at Lesbiatopia.

In addition to California’s Proposition 8 on the ballot in just a few weeks, Florida has Amendment 2 and Arizona has Proposition 102, both of which would amend their state constitutions to define marriage as between one man and one woman. Arkansas also has Act 1 on the ballot, which would forbid gay and lesbian parents – and any unmarried parents – from adopting children.

Every day during 8 against 8 I’ll be featuring some different things against the initiative. Donate some funds NOW, talk to everyone you know about voting in this year’s election (regardless of their location), urge your Californian friends and family and lovers to VOTE NO on Proposition 8.