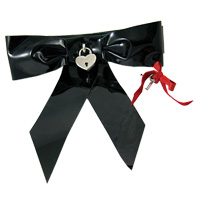 I like the bow restraints. They came to me from one of my very favorite fabulous sex toy stores. The bow itself, and that it is locked with a key – very hot. Unfortunately, they’re not so easy to get on and off, and they were a bit uncomfortable to wear, too.

First: the bow. When I saw these I thought, okay, that’s either going to be a HOT femmey accessory, or it’s going to look stupid. And we all know I’ve got a bit of a fetish for ribbons and ties, right? I don’t know what it is exactly, but something about bondage and femininity together. And the bow works. I like the look of it.

It’s more like an accessory. I kind of want to throw a bondage party and ask her to wear it all night, not sure she would, but it would be hot to watch her struggle to eat, drink, host.

The trouble comes into paradise here when putting all these things together – the loop that holds her hands, the bow part (which is purely decoration), with the lock holding them both together. That’s three layers of material, and the lock, though very small, doesn’t slip in very easily. This isn’t much of a problem at first – “okay, I’ll just be patient, work it in,” I am thinking. [Do I have to say it? ‘A boy’s gotta know how to be patient and work it in.’ Yeah, I know, I couldn’t restrain myself.] That worked fine, but later, in any moment of panic, they couldn’t be removed very quickly, which could make things much worse and could even be a bit dangerous.

Maybe I just need to break ’em in a bit more. Maybe there are ways to pull them less tight, so the lock is easier to manouver. I don’t want to give up on these bow restraints just yet – but I know I probably wouldn’t just impromptu grab them from the toybox without preparing to use them, making sure I had the keys handy. Especially when I could use my bondage belt in two seconds, and I know exactly how easy and uncomplicated it is to put on and take off.