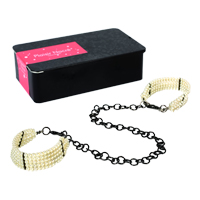 Kristen & I spotted these when visiting our local Brooklyn Babeland a month or more ago. We were both pretty skeptical about the quality – not that they aren’t nicely made, but whether they could really withstand any sort of real bondage play. I mean there’s a reason why bondage enthusiasts use really nice rope, ya know? So I jumped at the chance to take a look at them closer, and see how well they hold up.

I wanted to like them, I was excited about their arrival and have been pushing Kristen a little to wear them out as jewelry. We haven’t quite gone to one of those parties lately, where a pair of pearl bondage handcuffs as jewelry would be appropriate, so we’ve pulled them out in my bedroom.

“Maybe it’s a fluke,” I said, hopeful. “I’ll see if we can get replacements so we can really try them.” Sometimes clasps just break! Regardless of the quality of the item!

And I did (because Babeland rules).

Kristen was skeptical, but wanted to like them, too. The replacements showed up and this time we got to rough-and-tumble around a bit with them on her wrists. They’re pretty: delicate and feminine, which I liked quite a bit. A lovely visual to add.

But after not very long, oh, ten minutes or something, we twisted and turned and were getting into it such that pop, the chain on one of the cuffs broke. The actual little circle got pulled too far and unlinked. It was easy enough to fix by re-bending the link to be closed … but I think we both gave up on the cuffs about then.

“They can still be jewelry!” I said, trying to still justify how these cuffs are awesome.

So … the moral of my review here is, if you like these as jewelry, then I say hey, go for it. They’re hot and fun and I can see an evening of watching someone squirm to drink a cocktail with her wrists cuffed together as very hot. But if you want to actually restrain someone, or throw them around when bound, these won’t hold up against much at all.

One thought on “Review: Pearl Cuffs”