I mentioned that last weekend marked six months that Kristen and I have been together … one of the things I did was to finally finish the lovesong mix that I’ve been working on for a and have felt particularly resistant to doing with her, exactly because of the ways that it is romantic and sometimes intense, but it made sense; we finally gathered enough songs to while. Mixes are one of those courtship things that I have often done too quickly in the past, make a whole CD, and it felt good to compile.

Just to further illustrate my reluctance to make a lovesong mix, the first draft of this CD was called “If Love Was a War, This Is How You Win,” a reference to the Feist song I chose, the lyric is “now I know I’m gonna win the war.” Kristen saw this title over my shoulder and was like, no. You can’t call it that. The second draft was called “Happy Through Rain or Whatever,” another lyrical refernece, this time to the Alice Smith song, and that too she wasn’t thrilled about. A Thousand Kisses, yes, romantic, but also a reference to the Mil Besos song by Patty Griffin.

Also: funny thing about the cover. I spent a few hours working on the image, searching for photos of famous kisses, finally using the Rodin sculpture. I printed everything up and got the CD and cover and insert all together … and was practically gagging with the sweet gross romanticness of it.

So I rebuilt the cover. 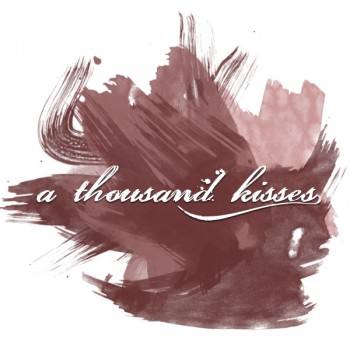 Ahh, so much better. Still a bit romantic, but no longer over the top. Whew.

So here’s the mix!

8tracks.com is a legal way to upload and share music in mixes like this (I found out about them through Bitch Magazine), so here’s the mix in its entirety. The only negative is that after you listen to it once, it has to shuffle the songs, so they’re out of order – and the order does mean something, in fact I spent a lot of time on the order, the precise space between the end of one song and the beginning of the next, so I don’t really love showing you the mix like this, but what can I do, seems like the best way to share music. (If you’ve got other suggestions, let me know.)

4 thoughts on “A Thousand Kisses”