This episode of fucking with gender is brought to you by Babeland, one of the most fabulous feminist, woman-friendly, gender-friendly, and queer-friendly sex toy stores, and the (in)famous male sex toy: the Fleshlight.

Oh boy. Where do I begin?

Mr. Man is by Jollies, and is 8.5″ long (6″ insertable) and 1.75″ in diameter, with balls that hang in front of the base, in front of the harness’s o-ring. The first draft of this cock was not made to go into a harness (you may’ve seen some of those reviews from some other sexblog folks last summer), but let me assure you, this one can strap on just fine. It is dense silicone, hard plastic but high quality, not very squishy but sterilizable, and it comes in “realistic” colors of chocolate, caramel, and vanilla.

The real kicker is this: it has a shallow indentation at the base made to go over the wearer’s clit, and a hollow center, a narrow tube down the middle from tip to base, which means when sucked, the wearer can feel pressure at the bottom. Yes, you can actually get off from a blow job with this cock.

Kristen (ever the willing co-toy-reviewer, I so appreciate that about her) says it’s actually a lot of work to keep that much pressure going while working on this cock. We’ve played with it quite a bit (remember the Rocking Chair Blow Job? Featured this cock) but I don’t usually grab for it when I want to get blown – since I got the Bandit I tend to go for that one. But that doesn’t mean this cock still doesn’t hold a certain thrill – oh lord it does – and I would list it in my top 10 toys, for sure.

I personally have never come this way. But damn, it feels goooood to feel her mouth working on me. I’ve often wondered how I could perhaps get better at using the Mr. Man, so I could come more easily. And I think that’s where I first came to the idea of playing with a Fleshlight or another guy’s toy, to practice the feeling of pressure on my clit that the Mr. Man creates, and see if there are perhaps better positions, or angles, or something, that make it easier for me to get off. 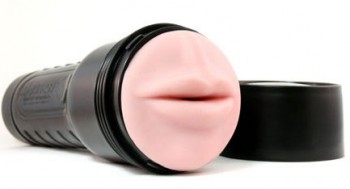 So I jumped on the chance when Babeland offered it up.

First, some information (copied from Babeland’s site): The Fleshlight is 8 inches in length with a removable base for greater length or vibe insertion. Made of phthalate-free “Reel Feel Super Skin.” The diameter is variable, 1/2″ x 3-1/2″. (The “reel feel super skin” part means it is NOT sterilizable, but it tends to be a solo toy, so unless you’re sharing, that probably doesn’t matter. Just something to note.) The inner part – the pink part – comes totally out of the case and can be turned inside-out for cleaning, which should be with warm water. In order to keep it soft, like many of the other “real skin” toys, it should be dusted with cornstarch.

I know, I know, you want to know that good stuff. What did it feel like to stick my dick in it? Did it feel like fucking? Was it possible to get off?

I could definitely feel it – the Fleshlight did create enough suction to pull on the Mr. Man and feel it in my clit. But I didn’t get off that way, and after a while (a few minutes at least, my hand was getting awfully tired) I keep getting increasingly frustrated – why not just use my hand?! It feels like … the cock and the Fleshlight are just in the way. And my hand gets really fucken tired – it’s a pretty tight fit, as you can imagine my cock doesn’t have any give to it, really, so sometimes it’s really tight and a lot of work to get it in and out.

It really wasn’t the fireworks I was hoping for.

But then, I ran across Babeland’s How To Use The Fleshlight guide, and that helped. Read some reviews of it, too, and that made a difference. I soaked it in warm water before using, and I lubed it up a lot better than I had before, which made it more pliable and easier to fuck. I tried it out in as many positions as I could think of, and thrusting into it rather than moving it on my cock is better, but problematic, and still a bit uncomfortable.

I like the idea of having it mounted somewhere, or between the mattresses, or somewhere stationary, but uh, that’s kind of more like fucking a real person, I guess, which is why it feels better. I know it’s not like all of us can just go, “hm, do I want to fuck the Fleshlight, or should I fuck this attractive chick, here?” I assume there’d be no contest. But for me, the options are more like, okay, do I want to wait until I can fuck a real person strapped-on, and get off with my hands actually touching my clit, or do I want to fuck the Fleshlight? And that’s a pretty easy answer.

I haven’t written it off entirely, and there is something about the genderfuckery of it all that is very appealing – and hot. I think I’m kind of hard to get off, in general, and this doesn’t really seem to make it any easier, so while I might get occasionally inspired to get back to it and try something else, I don’t think I’ll use it regularly.

I’m so glad I got a chance to try it, though. I never would’ve known, and I always would’ve wondered.

4 thoughts on “Review: the Famous Fleshlight”