You know what sucks? Not getting off. And I really didn’t realize how often I did (ahem, just about daily) or how comforting it is for me as a nightcap or a pick-me-up until I spent the last six weeks crashing on my own couch or sleeping over at Kristen’s house. Not that Kristen wouldn’t have minded if I had jacked off before bed, I’m sure, but usually it didn’t even occur to me, not the same way that it had become just part of my nighttime routine when I was home alone. 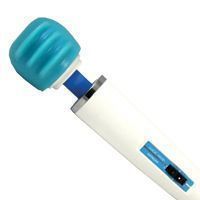 About two weeks ago, Babeland offered up the Off With Your Head attachment for the Hitachi Magic Wand vibrator, one that I’ve been coveting for a while now. When I purchased my Hitachi in college, I was impressed with the vibration, but it really wasn’t specific enough or delicate enough (hah! If there is one thing the Hitachi is not, it is delicate) and I specifically remember a discussion with one of my colleagues at the writing center where I worked where she said, “get the attachment.” And I said, but I don’t really like insertables, I’m not looking for something to go inside … and she said “no, no, I get it, I know, get the attachment, use that on your clit, it’ll be better, I swear, trust me.”

And so I did, and she was right. An attachment like the Gee Whiz silicone attachment or the G-Spotter focuses the vibration and makes the otherwise overpowering vibration of the Hitachi more specific and concentrated, which is precisely what I needed.

So that was what, six years ago? And now that I’m used to the Hitachi, other vibrators seem awfully worthless. I do think there’s a little truth to the rumor that vibrators make you less sensitive – I know my sensitivity changes depending on what kind of sex acts I’ve been frequenting. But there are other factors too – like what time of the month it is, how I feel about my body, how connected I am to myself or to my lover. So the strength of the vibrator not the only contributing factor to my own sensitivity, but it does make a small difference, and the teeny vibrations of other vibes are just not enough. Although, to be fair, they weren’t enough for me even BEFORE I used a Hitachi, which is the major reason why I got a Hitachi to begin with. I’m just not as sensitive as some of you.

It was only very recently that I discovered that the white head of the vibrator comes off, and can be replaced by this fabulous silicone one by Vixen. Makes so much sense – it’s sterilizable, so you can share it with someone and sterilize it, and plus it’s got these ridges and bumps and edges that focus the vibration in the same ways that the G-Spotter and Gee Whiz attachments do, but without the protruding part made to actually penetrate. Which stores better in the toolbox I keep next to my bed, with all the things I want easily accessible, and visually I like it better anyway.

So the Off With Your Head attachment arrived, just about the time that my bed was starting to be bedbug-free, and we spent an hour or so getting to know each other – the new Hitachi head, my bed, and me.

Getting off that day, I realized I didn’t really remember the last time I did that, which was unusual, and choked me up a little, actually. You know how sometimes you’re so inside of something that you can’t recognize even what a big deal it is? Today I ran across an old post from Havi saying, “Sometimes we can’t notice that we are in pain and sometimes we are so entangled in our own pain and distress that we aren’t able to pay attention to someone else’s pain and distress.” And while I’m sure that’s true, there’s also the aspect – for me – of being so wrapped up in the pain and distress and so focused on getting out of the pain and distress that I don’t even see the kind of pain and distress I am in. I should’ve noticed that things that I do to take care of myself – like yoga and meditation and masturbation – were slipping away from me, but I didn’t really. I gave them lip service, I thought I was keeping up, but I wasn’t, not really.

And yes, I’m using it much more frequently now, and I feel so much fucking better, thank you for asking.

Buy the Off With Your Head attachment for the Hitachi Magic Wand at Babeland, awesome queer and feminist sex-positive sex toy store.