So, I sat down to watch Post Apocalyptic Cowgirls through the Sugarbutch VOD a few weeks back. 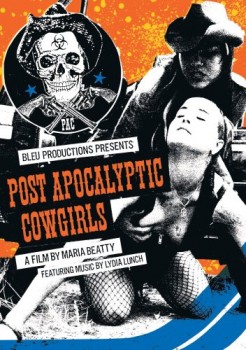 After the Third World War and global warming have transformed the planet into a desert, what remains? Two post-apocalyptic cowgirls in leather and Stetsons! A delicious submissive hitchhikes on a bleak Arizona highway. A car stops. A tough exotic Amazon with a gun and boots invites her into the car. The chemistry between these two sexy, dangerous lesbian chicks is gonna make you hotter than the desert sun. They spank, lick and play with boots, guns, snakes, and cacti in the dust. Their sex is a dripping wet oasis from the heat! 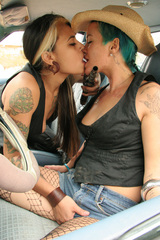 This film features the same two girls throughout, in five different scenes. They aren’t butch/femme, they aren’t particularly gender-anything, but, despite that that is probably my primary fetish, I didn’t mind its lack of presence. There is not a lot of power play – dom/sub or top/bottom – going on here either, which I also find pretty much a requirement of what I’d call good sex these days. One of the girls is more in charge than the other, and could perhaps be called the top or the dominant in this film, but the tables do turn and she does get fucked in the end.

I didn’t love her top/dominant presentation in this film, which is probably another reason I am saying that the power dynamic was lacking. Perhaps those of you who like their tops like her would find this very power-heavy and totally satisfying, but I didn’t think she was very inspiring. The sub/bottom was pretty good, but neither of their power roles felt particularly inhabited or inspired. (Plus, the toppy girl kept doing that sucking-air-through-her-teeth thing that really bugs me.) 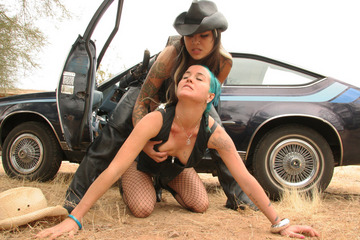 If you’re a fan of Pink & White, as I am, this film doesn’t really compare. The queerness, gender, power, and skill in Pink & White is so well done and precisely what I love about sex – nobody’s as good as Pink & White. But looked at on its own scale, Post Apocalyptic Cowgirls is fun and sexy, with a bit of unusual edgeplay.

(images from cinekink)
Rent or purchase Post Apocalyptic Cowgirls from Sugarbutch’s Video-on-Demand site through Hot Movies For Her.