… is up at Carnal Nation! 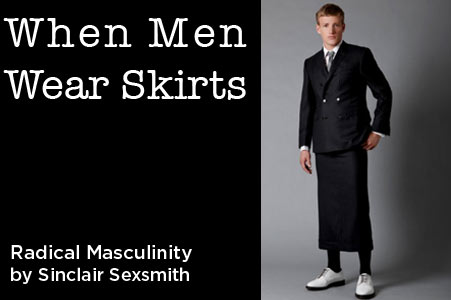 A little taste of what I discuss:

One of my basic tenets of gender is the deep belief that gender should not dictate one’s personality. Personality traits are made up of hobbies, interests, and activities; one of the classic ways we police gender in this culture is to require that men only do “manly things” and women do “womanly things,” and when a man does a womanly thing, we get all up in arms about it. Ask my sister’s boyfriend: he’s a cop, the man carries a gun for goodness’ sake, but when he started growing sunflowers, he got teased incessantly by his best friends and coworkers alike. Someone—anyone—is extra quick to criticize when one of the activities we like to do is outside of our gender assignment.

Yet it is more socially acceptable for a woman to cross over into seemingly masculine hobbies than for a man to cross into feminine ones (at least at the amateur level—men still dominate fields traditionally seen as “female” such as cooking, baking, and sewing at the professional level, but that is a slightly different topic). The advances that the various feminist movements have made in the last 100-plus years have made it more acceptable for a woman to get really obsessed with NASCAR racing, or World of Warcraft and video games, or pro-wrestling, or environmental engineering, or the stock market, or any of those other supposedly “masculine” interests and hobbies. She may be insulted for these interests, she may be called a dyke (equating her gender identity with sexuality), but she has support. She has other women who have gone through this, she has documents, she has a feminist history to call upon to tell herself—and others—that she can like these things and still be a “real” woman.

However, if a man wants to grow sunflowers or bake cupcakes or learn how to needlepoint or host fancy dinner parties or make greeting cards, there are consequences: the people around him, friends and strangers, will police his hobbies, words, and actions around things seen as “unmanly.”

Head on over to Carnal Nation for the whole thing.