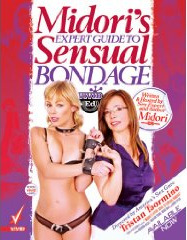 Midori’s Expert Guide to Sensual Bondage DVD is directed by Tristan Taormino and written & hosted by sex expert and author Midori, and I am familiar with both of them in general, so I knew I would probably enjoy it. When it arrived, though, I was a bit disappointed that it wasn’t a video version of her Art of Japanese Bondage book – I don’t have a copy of it, but I’ve been eyeing it in Babeland for years. I was hoping the DVD would be elaborate, beautiful rope bondage, but it’s not.

One of the things that has kept me from doing more bondage is that it seems difficult, elaborate, and highly skilled – but that’s really only one kind of bondage, the fancy rope artistry kind. And though I have a few moves (see: Crab Tie), I often just don’t even practice what I know because I feel like it’s time consuming and will interrupt what we’re doing.

Kristen, though, I know, really likes bondage. Really likes to be tied up and tied down and restrained. While she does not love much pain, as a bottom, she really gets into that submissive mindspace when restrained and bound. She has often requested it more frequently and though it is frequent in our play, I could do it more often I’m sure. She has said that every time would not be too often, in fact. And though I often restrain her with my hands, holding her down or holding her wrists or ankles or under her knees, I could do more.

This video very much inspired me to do so.

And, it gave me a whole lot of ideas of things to use aside from elaborate rope ties – in fact, very little rope is used in this film. They use the Under Bed Restraint System (which I highly recommend, I got one for Kristen’s house that I still need to write up and it’s fantastic), wrist cuffs, ankle cuffs, belts, scarves, and some great snap hooks to hold it all together.

Midori’s introduction was pretty basic, had some great solid concepts and guidelines for bondage play, though nothing I wasn’t already familiar with. When she started demonstrating with some pretty purple scarves, I thought, damn, where do I get some like that?! (Lucky for me, I have some Liberator Silk Sashes just begging for Kristen’s return from her holiday family visit.)

I thought this video would be for beginners, but I don’t consider myself a beginner with bondage, and I got a lot out of it. It has four basic scenes: Midori’s introductory instruction, a hands-on demo with Midori, Adrianna Nicole, and Mark Davis, a scene with Adrianna and Mark, and a scene with Madison Young and Danny Wylde. Midori has some comments throughout the two scenes, but it’s fun to see some of the bondage ‘in action,’ which is a good way to get familiar with putting bondage on and taking it off during an actual scene.

I was kind of waiting to watch this video so Kristen and I could watch it together, but now I’m kind of glad I watched it on my own – the tricks will be more mine and less like I copied them from an instructional video. (Not that she won’t know that’s where I got ’em, she reads my posts. Still, she won’t have the visual of seeing someone else do it first.)

There’s a particular moment in Adrianna and Mark’s scene where Adrianna has wrist and ankle cuffs on, and they are cuffed wrist-to-ankle with a double snap ring (like a two-sided caribiner). She is on her back in bed with her head near the edge, he is fucking her mouth with his cock while he’s got his fingers in her pussy. It was nice – I am looking forward to testing that out.

Now I’ve just got to add some double snap rings and wrist cuffs to my toy box. Perhaps I’ll use some of that Christmas money from Grandma and invest in a few of those.