He’s also listed as #62 of the Top Hot Butches, with his own consent. In fact, he told a mutual friend that he associates the term ‘butch’ more with gay men’s culture than lesbian, and is happy to be identified as such. (I’m paraphrasing through a game of telephone, forgive me if I’m misquoting, but I think the meaning was clear.) 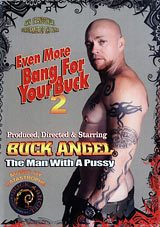 More details: Even More Bang for Your Buck 2 is produced, directed, and starring Buck Angel. Music for this film is by Katastrophe, a very talented musician and FTM rapper (and, I believe, Michelle Tea’s partner).

Here’s the description from Hot Movies 4 Her:

Buck Angel fans are in for another treat from everyone’s favorite man with a pussy. Buck directs, produces, and stars in the latest release from Buck Angel Entertainment.

The first scene is with Brad S, a hot Latino with a big hard cock who wants to play hard with me. He does not have a hard time keeping that piece of meat ready for action. This is set in a construction site. Great pussy eating and fucking action.

The third scene is with FTM Boi fallen, a very cure FTM boy. I love dominating him in this scene. This is really my first scene with just me another transman. I love this scene because it has real hardcore action and we have great sexual energy together. If you have ever wanted to see me fuck another FTM this is your chance.

The film has music by FTM Rapper Katastrophe which adds to the the raunchy hardcoreness of this film.

Watch Even More Bang for Your Buck 2 or more videos by Buck Angel Entertainment over at Sugarbutch’s VOD on Hot Movies 4 Her.