You may have heard me mention the queer reading series that Cheryl B. and I are starting in New York City. Well, it’s official—it’s starting April 13th at 7pm at Sapphire Lounge in the Lower East Side of Manhattan. 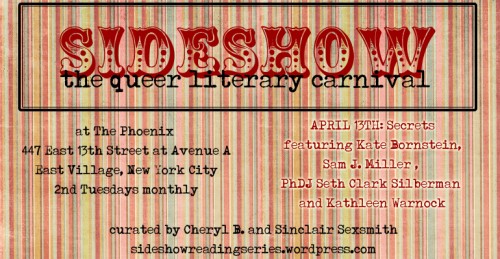 Kate Bornstein is an author, playwright and performance artist whose work to date has been in service to sex positivity, gender anarchy, and the building a coalition of those who live on cultural margins. Her work recently earned her an award from the Stonewall Democrats of New York City, and two citations from New York City Council members. Her latest book, “Hello, Cruel World: 101 Alternatives To Suicide For Teens, Freaks, and Other Outlaws,” is an underground best-seller. Other published works include the books “Gender Outlaw: On Men, Women and the Rest of Us”; and My Gender Workbook. Her books are taught in over 150 colleges around the world.

Sam J. Miller is a writer and a community organizer. His work has appeared in places like The Minnesota Review, Washington Square, Fiction International, and The Rumpus. For more info check out samjmiller.com or facebook.com/samjmiller

Seth Clark Silberman aka PhDJ is a fantastical NYC DJ Writer Photographer. He was the first junior faculty to teach lesbian and gay studies at Yale University, where he coordinated the first academic conference on Michael Jackson. His academic work has been included in the journals GLQ: A Journal for Lesbian and Gay Studies and Social Semiotics. His fiction has been included in the Lambda Award-winning anthology Fresh Men: New Voices in Gay Fiction, edited by Edmund White and Don Weise, and in Quickies: Short Short Fiction on Gay Male Desire, edited by James C. Johnstone.

Kathleen Warnock is a playwright and editor. Her plays have been seen in New York, Ireland, London and regionally. She is Playwrights Company manager of Emerging Artists Theatre, and director of the Robert Chesley/Jane Chambers Playwrights Series for TOSOS Theatre. She is also editor of Best Lesbian Erotica. She is tired.

Cheryl B. (cherylb.com) is an award-winning writer, poet and performer. Her work appears in dozens of print and online publications, including; Ping Pong, Word Warriors: 35 Women Leaders in the Spoken Word Revolution (Seal Press, 2007) and BLOOM, among many others. She has appeared at most major New York City literary evenings and toured throughout the U.S, Canada and the U.K.

Sinclair Sexsmith runs the award-winning personal online writing project Sugarbutch Chronicles: The Sex, Gender, and Relationship Adventures of a Kinky Queer Butch Top at sugarbutch.net. With work published in various anthologies, including the Best Lesbian Erotica series, Sometimes She Lets Me: Butch/Femme Erotica, and Visible: A Femmethology volume 2, Mr. Sexsmith enjoys whiskey, topping, the serial comma, political activism, and has been known to get on her knees in order to fix the strappy sandals of a queer femme. Sugarbutch Star chapbooks are available, if you ask nicely (and have ten bucks)