In honor of President Obama’s newly announced policy on hospital visitation rights for gay and lesbian couples, I’m encouraging you to go see a play, Decadent Acts, here in New York City, set in the 1980s and facing precisely this issue.

The Washington Post reports, “Officials said Obama had been moved by the story of a lesbian couple in Florida, Janice Langbehn and Lisa Pond, who were kept apart when Pond collapsed of a cerebral aneurysm in February 2007, dying hours later at a hospital without her partner and children by her side. Obama called Langbehn on Thursday evening from Air Force One as he flew to Miami, White House officials said.”

I remember that. I’m glad she got an apology, and acknowledgement, though of course that won’t really provide much solace after losing her partner of eighteen years. Still, that is a great example of something personal becoming political, with the tragic story being capable of moving people to action.

Perhaps someday plays like Decadent Acts will be artifacts, things that the next generation studies when they learn about the history of oppression, instead of current policies and struggles.

I hope you can make it to see it while it’s playing. 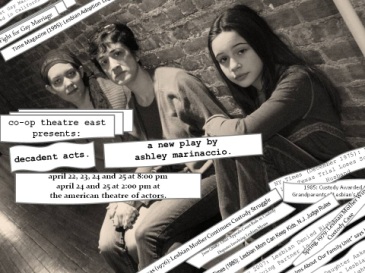 Set in late 1980s New York City, Decadent Acts chronicles the story of a lesbian couple struggling against legislated discrimination. When television personality Farah White falls fatally ill, her partner, professor Jolene Shatila, along with their daughter Nicole, are faced with unexpected challenges that will change their lives forever. From child custody laws, to hospital visitation rights, Decadent Acts spotlights the harsh reality of discriminatory regulations against same-sex partners, plunging emotional and political depths with grace and searing honesty. At a time when the push for full equality is finally building real momentum across the country, this play couldn’t be timelier.