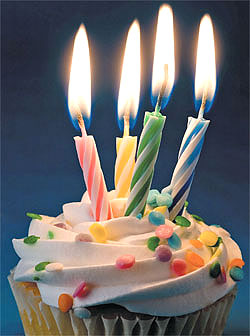 Today, April 29th 2010, marks the fourth anniversary of beginning Sugarbutch! I’ve been going at this site nearly daily for four years straight, and it’s the first anniversary where I am not working at another job; Sugarbutch is my full-time job.

I’ve also started writing many other places, including the Radical Masculinity column at Carnal Nation, my Mr. Sexsmith’s Other Girlfriend column on New York City for Eden Fantasys’s magazine Sex Is, and I even had a piece over on After Ellen this past week. I’ve started a reading series, with Cheryl B., called Sideshow! The Queer Literary Carnival, and I’ve been teaching workshops and classes more frequently. I’m keeping track of all of those things over on MrSexsmith.com, rather than here, so if you’re interested in where I’m performing or where else my work is appearing, subscribe to that RSS feed. I’ve also started keeping media (video, audio, and photographs, mostly) over on my mrsexsmith.Tumblr.com, which has freed up this space a little more for in-depth writing.

I have some more projects in the works for the near future! Stay tuned.

I have always reflected back on this very first post when I do these anniversary posts, and as many of you are new readers these days, here’s an excerpt from my very first post, bed death, standard variety:

I’ve been with my girlfriend for three years. We met in college, in a Men & Masculinity class. It took another couple of quarters for us to get together; we had a slow start, easing into each other and into a relationship, which was wonderful. One of the great things about our relationship is how well we have been able to keep our autonomy – we never became one of those couples that you never see without the other person, we aren’t joined at the hip, we don’t constantly speak in first-person-plural. Of course, the greatest strength is often the greatest weakness, and in our case, the intimacy has fallen out of our relationship almost entirely.

We haven’t had sex in … longer than I care to admit. And in the last two years we have probably had sex five times. I stopped counting the days between.

I’m surprised at how clear that is, when I look back at it. It feels like such a murky, confused time, but I lay it out so clearly: I’m not getting the sex I need. I still believe sex is a basic human need, perhaps not for survival on the food-water-shelter level, but on the hierarchy of needs scale, certainly. It is something we need in order to feel psychologically safe, protected, comforted. Well, maybe saying “sex” is too broad. We don’t actually all need sex. I need sex, I need hot dirty queer kinky sex, but perhaps you need pretty music playing candles lit sex. Perhaps you are totally satisfied with the once-a-month quickie. Perhaps you’re asexual, and need companionship, partnership, friendship, intimacy in other ways.

That post is under password protection now, as is most of the things about my exes and personal life. If you want the password, join the (very very rarely occasional) mailing list, and it’ll be sent to you when you confirm your subscription.

The traditional gift for the fourth anniversary is fruit, flowers, and books, or, I’m told, the modern equivalent is electrical appliances. Umwhat? People don’t need fruit, flowers, or books anymore? Those seem way more important than electrical appliances. I mean, I like the next tech gadget as much as anybody (though I think I’ll buy stock instead of the iPad, even though I’m really coveting it currently), but it’s almost summer! I can’t wait for strawberry shortcake.

On Sugarbutch’s second anniversary, I reflected on where this blog started and began the tradition of “ask me anything,” which I did last year also. So, in the spirit of keeping up with traditions, let’s do it again: Got a question for me? Ask me anything. You can ask anything, from personal details about my life that you’ve always wondered, to questions about advice for sex toys or your relationship, to philosophical musings on identity, gender, or sexuality theory.

Read back on some of the former “ask me anything” questions, and add your own in the comments. What do you want to know? I’ll answer as many as I can.