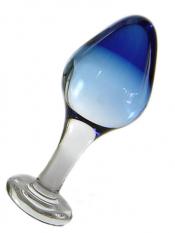 This, my friends and readers, is the Moon Glass Plug from Good Vibrations, and it is beautiful.

Can’t you tell already, just by looking at it? That blown glass with the gentle blue coming through it? (Maybe that’s just me. I do have a thing for blue glass. If I had it my way, all of my dishes would be blue glass.)

The other night, when Kristen and I were playing, I had her on her stomach in front of me, her chest down on the bed but her knees under her, ass up. We’d already been fucking for a while, she’d come three or four or eight times, who can keep track, and I slid my cock in from behind her while lubing up my fingers. For a while I just touched her asshole gently on the outside, I could feel her relaxing and starting to enjoy the feeling, opening up a little, pushing back against my finger and cock. I had the Moon Glass Plug out, ready to use, and touched it too against her asshole, but she wasn’t really ready for it, so I started with my fingers instead.

“Put your fingers on your clit,” I said.

She did, brought her hand down between her legs. I started sliding my finger into her asshole, just a little, really only knuckle-deep, just so she could feel it for a while. But it didn’t take long before she was getting all hot and squirming against me, bucking her hips harder, and I worked my finger a little faster in her ass, not deeper, just faster, which she liked, oh I could tell she liked it right away. I’m not sure what she did exactly, moaned maybe, or just responded physically in a way that was clear that was it, right there, perfect.

I noticed I’d kind of stopped moving my cock, so tried to get my hips going while she continued to work herself up. Now, this is a girl who can come by her own fingers in mere moments, so that it was taking much time at all was telling in that she must’ve been very worked up. I could feel her clenching hard on my cock, so hard in fact that she started to push me out, clenching her ass too, hand moving faster, gasping, as she came, hard.

So hard, in fact, that she ejaculated, gushed all over my cock and thighs. I silently thanked my Liberator Throe, and out loud, groaned. “That was so damn hot.”

I moved forward up to the pillow to hold her closer and kiss her for a while. She asked if I’d used the glass. “No,” I said, “that was my finger, just a little of it. Do you want to try it yourself?”

She took it from me and slowly worked it into her ass. For a while she said, “it’s too big, it’s too big!” but didn’t want to give up, and was certain she could do it if she moved slowly. I stayed next to her as she took the whole thing, finally, then brought her hands down to her cunt again to get off a few more times.

I told her I wanted to watch for a while, asked if she wanted my help.

She likes the weight, holding her down. I spread my forearm across her breastbone and kissed her, my body slightly lifted from hers as she continued to work her hands between her legs. I like to watch the way her body gets all tense, then releasing as she comes.

She came again, once nice and hard, then another for good measure, collapsing onto the bed. It took a little more work to get the plug out of her ass, since it’s pretty thick and spherical in the middle and has that skinny little neck before it flares to a plug. It’s only 3 1/4” long x 1 3/8” wide, but the shape makes a difference, and even makes it feel more thick than it actually is (though it is pretty thick).

And it’s gorgeous. Did I mention that it’s gorgeous? The most beautiful butt plug I own, though I don’t know if I usually describe them as “beautiful,” so perhaps that’s easy. The glass is smooth and hard, and very simple to clean. I haven’t tried it myself yet, but since it’s easily sterilizable, I will be. And I’m looking forward to seeing it in her ass again, too.

The beautiful Moon Glass Plug was sent to me for review by Good Vibrations. Get your own, or a different butt plug, or many other fabulous sex toys over at the Good Vibes website.

3 thoughts on “Review: Moon Glass Plug, and How We Played With It”