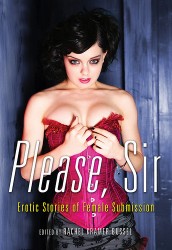 Please, Sir edited by Rachel Kramer Bussel, arrived in my mailbox a few weeks ago and I was thrilled to see it. Right away I noticed how luscious and vivid the cover image is … Rachel always has great covers, but it’s one of my favorites. Her bright, open eyes and the colors of her skin and corset (!), digitally smoothed no doubt, but stunning.

They are strictly from the perspective of the female submissive, and so the stories are written by women. Most of the contents are heterosexual, with the dominant in the story being a guy. They are not so gender-forward or radical, but that doesn’t mean they aren’t lovely: they are. And that doesn’t mean that a queer like me didn’t enjoy the book: I did, very much.

It’s kind of like Kate Bornstein’s WALL-E theory—that it’s possible to superimpose your desired gender combination into stories and songs and art, even if it isn’t what the author initially intended. And in this case, it’s not so hard to consider that this “guy” is a butch who goes by male pronouns (at least for this scene), and to read it with a queer eye, imposing my own desires and orientation and gender identities on top of the dominants.

Reading it this way makes the stories really hot, actually. Whereas it’s still kind of a challenge for me to read stories of male dominance and female submission, since I suspect so easily and quickly the ways that dynamic is prescribed and unquestioned, when I imagine it a butch and femme, or more of a queer dynamic, I can quickly see the dynamic as a parody of itself, an intentional play upon the prescribed roles, and that is, for whatever reasons, precisely what I like.

A couple stories stand out: the one by Kissa Starling, about the brat, the woman in a little girl role acting out by flirting with other guys while her Daddy is observing her, then punishes her, ultimately asking her what it was she really needed, why she was acting out. There were a couple rather complex concepts explained in there that I connected with. (I didn’t love the end, where it seemed like the girl didn’t actually learn anything but was going to simply continue acting out, but the rest of it had some good stuff.)

I really appreciated Rachel’s introduction, too. Here’s a snippet:

If you ask me, submission is an art form. It requires dedication, focus, commitment and desire and there’s no single way of doing it. It’s about unlocking something within yourself so you can reach beyond your normal limits, exposing your body and soul in order to go somewhere you cannot get to alone.

I had a lover who always told me that the key to life is “High risk, high reward.” The same is true about kink, and this is evident throughout the stories in Please, Sir, which explores female submission and male dominance from the sub’s point of view. When these characters take risks, they are rewarded…even when those rewards look like “punishment.” They are rewarded in all kinds of ways, from being bound to being praised to being choked, spanked or put on display. They are rewarded by being tested again and again.

Hot, eh? This whole book is like that, intentional and beautiful in its descriptions of submission and surrender. Sometimes I don’t get enough of that perspective in my own work, I get so involved in topping and in describing the topping and dominance that sometimes, it feels strange that anybody would not want to be the top, or be the dominant, since that is so clearly what I want and what I like. It feels deeply validating to be reminded that there are people out there who need to submit in similar ways to how I need to dominate, that our desires run parallel and complimentary, that we fit into each other. This book is a really lovely validation. I’ll certainly pick it up again and thumb through it on occasion, finding more gems of stories, connecting to new ones each time I read or re-read.

Kristen and I brought it on our camping trip a few weeks ago, and read a few stories aloud to each other, which was a lovely way to spend an evening curled up in a tent. I also love reading erotica aloud on road trips (though Kristen can’t read while in a car, and I tend to drive, so we don’t do that often).

As if that isn’t enough to encourage you to check out this new publication, here’s the amazingly sexy book trailer that Rachel put together:

Yeah, okay, so that’s all that needs said.

Check out the rest of the Please, Sir blog tour on pleasesirbook.wordpress.com, and buy it at your local, independent, feminist, queer activist bookstore, or, if you must, on Amazon. 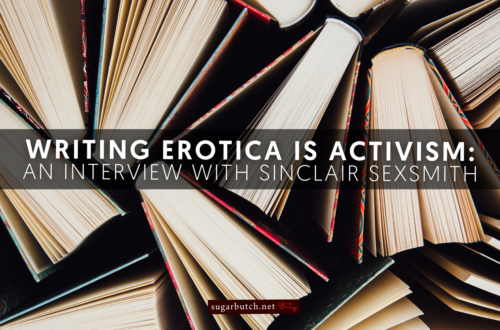 Writing Erotica Is Activism: An Interview With Me on Erotica Writing
November 30, 2021 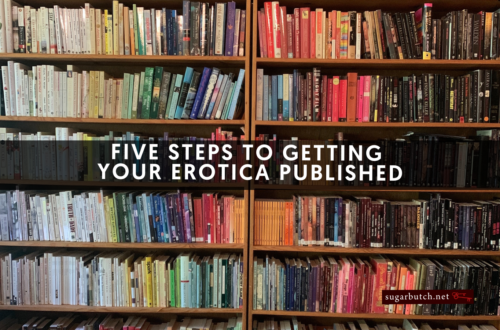 Five Steps To Getting Your Erotica Published
August 31, 2021 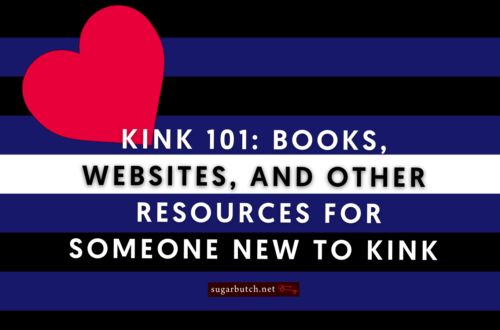