“I wish I could show you when you are lonely or in darkness the astonishing light of your own being.” —Hafiz

I haven’t found an official psychological definition of the Outsider Complex, but I think it does exist in those circles. Maybe the phrase seems common sense enough that nobody feels the need to define it somewhere. You can tell what I mean by it already, right? The occasionally overwhelming obsession of being an outsider, which sometimes means either putting oneself in a position of being an outsider (be that consciously or unconsciously) and often lamenting “not fitting in” or not being part of the status quo.

And as usual, I believe that if we can name something, define it, study it’s parameters, that when it comes up in our own lives, it will feel easier to deal with, because we have some sort of Big Emotional Reaction and we can point our finger and say, “Outsider complex,” take a breath, and have some sort of context for what’s happening. I believe that making the process conscious will improve it. 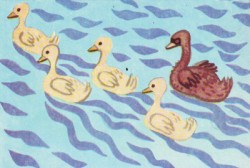 I’ve been talking about the Outsider Complex a lot lately. Everybody’s got their own version of it, I think—even most straight white Christian republican cis guys, I would argue, still get their own healthy dose of it, perhaps it’s just an inevitable side-product of this individualist culture. But it’s been coming up for me because Kristen’s version of it and my version are very different. And sometimes, that has created some tension between us, because I just didn’t get where she was coming from.

See, I grew up in Southeast Alaska. If you’ve been following along with my column Mr. Sexsmith’s Other Girlfriend, you know all about it; I’ve been writing about my relationships with places a lot over there. Not only did I grow up very much outside of suburbia, American cities, and even American farmland, I also grew up with hippie parents who don’t buy much into pop culture, I grew up vegetarian, I grew up with a lot of pagan influences. Combine that with my particularly unique name, and just those factors alone gave me a sense that I was different from the time I was little. But instead of feeling like that was a problem, I saw it as a badge of uniqueness. I like being different. I like being outside of mainstream culture.

So yeah, I do have an outsider complex, but it acts a bit differently than other people’s—in particular, than Kristen’s—and different than what I observe in the queer communities as a whole. Generally, I think the outside complex works more as a badge of shame, thinking ourselves inferior because we don’t fit it.

For many of us, hitting puberty and discovering that there’s something “different” about ourselves, even if we don’t quite pinpoint our gayness or butchness or transness until later, was the turning point, the place of no return, before which we were “one of the gang” and just going along like all the “normal” kids, and perhaps we have this deep-set feeling that if we could just get back to that, everything would be alright.

Perhaps that too is partially a loss of innocence process, where we learn something new and we can’t ever go back to when we didn’t know it, even if we wish we could.

Some of this Outsider Complex can also be growing up queer without any sort of queer influence. No older queers, no peers, no mentors, nobody who even said words like lesbian or gay or queer or kinky or butch or femme or trans or whatever. I think that’s changing, more and more, what with that little revolutional technological thing called the Internet, and with the advances in the gay rights and gender movements in the recent years, so perhaps kids today (oh my god did I just say that? I’m old) are growing up with much less of a sense of the Outsider Complex, just by their very different exposure to queer culture.

I continue to see this manifested, though, in so many ways with queers who are adults now, who have been out for a decade or more, who do take part in some sort of queer community: there’s still this sense of isolation, of being different than, of being not fully accepted or not fully understood for who you are or what you love.

I even think it is sometimes used by us in martyr-type ways: oh look how much of an outsider I am, oh look how different I am than everyone else, you couldn’t possibly understand me, woe is me woe is me. In the worst case scenario, perhaps.

It’s something personally I haven’t quite struggled with. And I don’t say that with any sort of hierarchy or judgment attached to it, one is not better than the other, it is just the way it is. Certainly I have my own complexes and issues, regardless of whether I have this one.

So to witness it in others is curious. What’s going on there? I want to ask. And when I see it in others, it breaks my heart a little. How would I ever explain how deeply you do belong? How common it is, to feel this way? How many thousands and thousands of other queers and kinksters and butches and femmes and whatevers just like you there are out there?

Maybe it’s because I spent years reading Wild Geese every single day, memorizing it, reminding myself, “Whoever you are, no matter how lonely, / the world offers itself to your imagination, / calls to you like the wild geese, harsh and exciting – / over and over announcing your place / in the family of things.” Maybe it’s because I was never indoctrinated into Christianity and have never believed in hating myself. Maybe I’m just really lucky, I don’t know.

So tell me, readers, Redhead Army Sugarbutch Fans, queers of all spots and stripes: Does this make sense? Do you witness this outsider complex in queer worlds? Is this something that you experience? How? Have you been able to address it and get past it? Or is it something you struggle with ongoing?