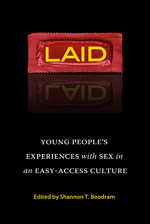 Perhaps I had unrealistic high expectations for this book. “The basement smelled like sex,” the book starts. “That thick, musty scent that sits in the air and clings to everything it touches. I inhaled deep and hard, thinking about the heated moments that had just passed. The moments when I was too busy creating the odor to even notice its sticky presence.” Maybe I thought it’d be a bit more upbeat, positive. I have a skewed perspective of sex education and what’s going on with sexually active youth, after all, consuming places like Scarleteen.com and attending queer and kinky events occasionally open to young people.

Laid is separated into five different chapters, each focusing on a different aspect of sex: hookups, positive experiences, physical consequences, date rape, and abstinence. I expected “consequences” and “date rape” to be harder chapters to read, but in truth they were all hard. I kept cringing from the negative, stereotypical information being given out at every turn. But because these stories are full of people’s real experiences and opinions, they can’t exactly be “wrong;” but I cannot recommend this book as any representation of sexual education, as it sells itself as being. The honest, real experiences expressed are valuable to read, but I clearly do not agree with these contributor’s value systems, and many of them I would disagree as plain old bad information.

As I got further into the book, I even doubted the values and knowledge of the editor, as each chapter wraps up with a series of questions about that chapter’s content from the contributors. Questions from Boodram such as “What does lesbian sex include, since it’s not possible to have traditional vaginal/penile intercourse?” (p55), asking a bisexual woman, “Do you have a preference?” (p110), and asking a woman who authored a piece on her abortion, “Why did you decide to abort your child?” (p178) all got me hot under the collar, for both the content and the phrasing.

Boodram admits that a book agent wrote to her, “This book is too negative. Despite having some good information I think the chapter on rape really drags things down” (p185). First, including a quote from an agent’s rejection letter in your book seems like a bad idea. Second, the book is too negative: but not just because of the rape chapter. The “physical consequences” chapter reads like a warning: Don’t Have Sex Or This Will Happen To You. And while it’s true that there are real consequences to sex, and that young people need to be educated about safety and caution, sex is not all bad! Despite the “positive experiences” chapter, the prevalence of scary, negative, and frightening stories was so pervasive that I can’t help but think I would be all the more inclined to agree with Boodram’s encouragement of abstinence after reading through these stories. Boodram used to run the site SaveYourCherry.com, which seems to be down now, and knowing that bit of information makes it even easier to see Laid as an advertisement for her philosophies about waiting to have sex because the consequences are too risky. Save it for the one you love! every chapter seems to shout. Or you’ll end up like me. It seems like a cheap way to use the honest, rare stories that these teens and young adults shared about their sex lives.

Boodram did include some men’s voices and perspectives in this collection of stories, but I found myself disappointed in that, too. In the introduction to the date rape chapter, Boodram admits, “My biggest regret about this chapter is that it does not include the voice of a male who experienced rape or sexual abuse. Twice I was contacted by different men … both expressed that they were interested in sharing their stories, and neither ended up submitting. … I had to give up” (p186). There must be more than two young men out there who have experienced sexual assault and who may be willing to share their stories around it. Rape is more complicated than women as survivors and men as perpetrators, and while that is the most common scenario, I wish she’d looked a little harder to include multiple perspectives.

But that’s the problem with a “sexual education” book based on real experiences: it is much harder to include content to create a full, varied, and wide representation of experience, since the editor may be limited to the contributions she received. And it’s difficult, as a critic, to disagree with someone’s personal experience.

Contributor Anthony writes in his story, “Teenage Pregnancy,” that he “never saw abortion as an option. I also know how selfish it may seem because I wasn’t the one carrying the child, but I don’t regret how firm a stance I took” (p180). This is a tough position on which to take a stance, controversial even, and while perhaps it makes sense to include multiple perspectives on the same situation, there was no corollary young woman with a feminist stance, saying she has the right to choose over her own body and that her boyfriend (or one night stand or hookup) was supportive, but understood that it was more her choice than his. In fact, there was kind of the opposite: another abortion story by Lorie who writes, “I did not include my partner in my decision. This I regret. I truly felt that the child was as much mine as it was his: thus, the decision should have been as much his as it was mine” (p178). I’ll skip over the part where she calls a fetus a “child,” and give her the benefit of the doubt that he was a great guy who would have listened and negotiated with her about what to do after they both got into this situation together. Hopefully, he would not have taken such a firm stance as Anthony, described above, forcing upon Lorie that abortion was not an option for her.

Perhaps abortion decisions are never so simple. Perhaps if Lorie had had a partner she could trust and confide in, she would have felt that pregnancy and birth was an option. Perhaps she wouldn’t say things like, “I get sad when I see a little girl who looks like me, or when I see pictures of a fetus. … I almost feel as though I’m not worthy to have another child because I let one go” (p179). But what about the flip side of that experience? What about when women have abortions and they feel okay about it, even good about their decision? What about the women who do not feel guilt? What about the right to exercise one’s choice? Those women are out there, that perspective on abortion is out there, but the sad regretful stories are far, far more prevalent in cultural narratives.

These experiences are clearly important, valid stories, real scenarios that these real people have gone through, and their real thoughts and feelings about them. I wouldn’t tell Lorie that her response to her abortion is “wrong” any more than I can tell someone else that theirs is “right”—I can only say that I know there are other responses out there, too, and when a book like this is touting itself off as an educational resource, I am not impressed.

There was one part I quite enjoyed: at the very end, almost as an afterthought with no bolding or italics, Boodram includes Ten Things I Wish I’d Known Earlier, and those points were right on. Those ideas, concepts, and general content I could get behind. “Sex is not just put it in, take it out. … Everyone thinks they’re good at sex without even really knowing anything about it. … Demand the truth about sex from your teachers and make sure they take adequate time to talk about myths verses reality. … Be confident and deliberate, especially when it comes to your personal life” (p278-279). She even includes Things the Contributors Want You To Know, a similar list of inspiring statements and personal revelations. Now this, this is useful. What would a book based on those ideas look like?

If it were simply a collection of essays on young people’s experiences with sex, it would have been an interesting essay collection. If it had been only a sexual education book written by Boodram, it may have stood up a bit stronger, and not had to answer to the long, real-life scenarios by her contributors. Regardless, there are better essay collections and much better sexual education books available; skip this one.

Thanks to Seal Press who sent me this book for review. Order it from them or from your local, independent, queer, feminist bookstore, or, if you must, from Amazon.