My Sideshow co-host and co-producer Cheryl B. is guest curating for another New York City queer literary reading series, Queer Memoir. Queer Memoir is a bit different than Sideshow (or In the Flesh or Red Umbrella Diaries or Drunken! Careening! Writers! or the Bluestockings Poetry Jam & Open Mic) as it features people who are not necessarily performers or professional storytellers sharing their lives and stories.

Cheryl’s guest theme is Sober, and it happens this Saturday, the 24th of July at the Queers for Economic Justice performance space in Manhattan. Come! I’m going to do my best to make it, and then likely go to Butch Burlesque at Dixon Place later that same night. 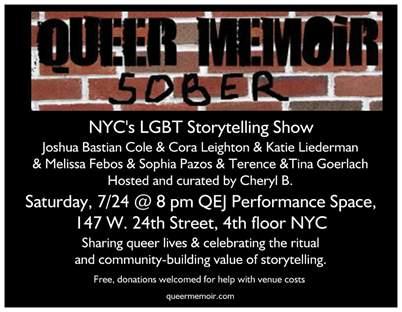 Cora Leighton recently moved to Brooklyn from Philadelphia. She is a resistant performer who writes and performs about bodies, queer identity, and community. She was recently named one of 1812 Productions’ Solo Performance Residents and will be performing at the Queer Bodies Event in Philadelphia in the next few months. Check out her website for more info:coratheperformer.com

Joshua Bastian Cole is a femme FTM stage and screen actor, writer, and playwright who has been featured in such publications as Out Magazine, the Village Voice, Time Out New York, London Metro, and the syndicated column: Trans Nation.  He has been seen in leading roles in films including Jules Rosskam’s ‘against a trans narrative’ and the staged reading of Tom Leger’s play White Boys in Paradise.  Cole has been published in the anthologies: Trans Forming Families, Beyond Masculinity, and Femmethology.  He is currently developing two new projects: a play called The Course and a musical called Now Serving.  Cole is an alumnus of James Madison University’s School of Theatre and Dance and next month, he will begin Brooklyn College’s graduate program in theatre history and criticism.  He wants to be a dancer.

Katie Liederman has written for Nerve, GO, Curve, Rap-Up, Velvetpark, Penthouse Forum, V, V Man, Lumina, Looserecord.com, The Archive, and was a resident blogger on Showtime’s Ourchart.com. She received a Bachelor’s degree in English from Cornell University and an M.F.A. in Nonfiction Writing from Sarah Lawrence College. She was born and raised in New York City.

Melissa Febos is the author of the critically acclaimed memoir, WHIP SMART (Thomas Dunne Books/St. Martin’s Press), which Kirkus Reviews said, “Expertly captures grace within depravity.” She has been featured on NPR’s Fresh Air with Terry Gross and the cover of the NY Post, among many other national publications.  Her writing has been published in venues such as Hunger Mountain, The Southeast Review, Redivider, The Rambler, Storyscape Journal, The Huffington Post, The New York Times online, Bitch Magazine, and on The Nervous Breakdown, where she regularly blogs.  She co-curates and hosts the Mixer Reading and Music Series at Cake Shop, teaches at SUNY Purchase College, The Gotham Writers’ Workshop, and NYU, and holds an MFA from Sarah Lawrence College.  This summer, she will be a McDowell Colony fellow. She lives in Brooklyn. More information about her work and projects can be found at melissafebos.com.

Sophia Pazos is a thirtysomething married woman who will not age gracefully anytime in the near future and will go kicking and screaming into that good night. Her mild mannered social worker persona is a useful cover for her other selves: Queer Latina femme, foul mouthed recovering addict and alcoholic, liberal leftist carnivore, snarky Scorpio, church deacon and Sunday School co-leader. When not playing on her blog, twitter, facebook, or foursquare Sophia enjoys reading books from the library, knitting bad looking scarves, makeup shopping, Tarot Cards, showing as much cleavage as possible and being the token lesbian fag hag at NYC AA meetings.

Terence is a femme ally and a tomboy pirate. She writes plays, tells stories, and contributes to Curve Magazine and Best Lesbian Erotica. She has two heroes: The first is Cotton Mather the Puritan Minister who railed against idle hands and, the second is Tom Hodgkinson, the Brit author of “How to Be Idle” and “The Freedom Manifesto” who promotes idleness as a virtue. You will often find Terence taking a nap, staring into space or pondering what Cotton Mather would do when faced with a 30-lbs load of laundry. Terence likes her drinks virginal and her women sultry and bookish.She loves participating in Queer Memoir and thanks Cheryl, Kelli, and Genne.

Tina Goerlach is a twenty-four year old artist, focusing specifically on abstract oil paint and writing poetry. In her words, “I love who I am, I love being a lesbian and I love to create. I have been clean for almost two years and actively participate in doing what I can to give back.  I go to Tyler school of Art.  My major is painting and soon to be art education.  Recovery is my new found life.”

About the guest host:

Cheryl B. is an award-winning writer, poet and performer.  Her work has appeared in dozens of print and online publications, including; Ping Pong, Word Warriors: 35 Women Leaders in the Spoken Word Revolution (Seal Press, 2007) and The Guardian.  Known for intense, humorous narratives, Cheryl has appeared at most major NYC literary evenings and toured throughout the U.S, Canada, and the U.K. Her awards include a 2003 Poetry Fellowship from the New York Foundation for the Arts, a residency at the Virginia Center for the Creative Arts and an honorable mention in Poetry from the Astraea Lesbian Writers Fund Awards in 2009. Cheryl is the co-founder/co-host of the popular NYC monthly reading series, Sideshow: The Queer Literary Carnival, “serious literature for ridiculous times.” She is proud to be sober for over nine years. Her website is cherylb.com.

The venue for this show is wheelchair accessible and all ages, We’re using a performance space at the Queers for Economic Justice offices that we’re really really excited about. Check out the QEJ website at http://q4ej.org/

Please note that this event is still free, however, we are needing to reimburse QEJ for the costs associated with the space. We’re asking folks who can to kick in five bucks or more, but don’t let that keep you away, if you want to come, come!

Queer Memoir is a salon for new work inspired by a monthly theme; a safe space to share memoir writing and performance; an opportunity to give voice to our collective queer experiences, and preserve and document our complex queer history; for writers, performers, and anyone with a queer story to tell.

Even as LGBT characters and “out” celebrities become more common in pop culture and mainstream media, the richness and complexity of real queer lives is still undervalued and often invisible. Queer Memoir attempts to provide an avenue to share queer lives and celebrate the ritual and community-building value of storytelling.