I’m still on vacation. But I wouldn’t deprive you of the Butch Voices countdown! Sugarbutch will resume regular posting on Wednesday, September 1st.

The Butch Voices Regional Conference in New York City (and then in Portland and LA) is coming up in just four short weeks. (And as someone who is part of the organizing committee, can I just say: GULP. So much to do!) And in honor, I’m counting down the Fridays with classic and modern butch book titles that I highly recommend. Just in case you want to start that butch library you’ve always been saying you might. 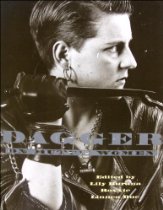 Dagger: On Butch Women edited by Lily Burana and Roxxie Linnea Due is, heartbreakingly, out of print. But it still exists out there in the world, especially with all the online booksellers. It was published by Cleis Press in 1994 and remains one of the only anthologies about butch identity out there … in fact, it’s the only one that I know of. There are other books on butch identity (as I’ll feature in the next few weeks!), but nothing quite like this.

I came across it when the Femme Top loaned me her copy and I immediately went out to pick up my own. It remains something I flip through and contemplate frequently, full of interviews, personal essays, analysis, gender dynamics, love letters to femmes, and touching stories of female masculinity out of compulsory femininity.

Pick it up at your local bookstore (who does used book searches, hopefully) or online, if you must, through Amazon.

And don’t forget, there are lots of great events coming up in September around the Butch Voices conference, starting with Butch Brunch on September 18!