Did you see that? Does it really say “2 Weeks” up there in the title. Um, reality check. So much to do! And I’m going camping with Kristen this weekend. She’s already made her famous (or what should be famous) potato salad. Which seems like a bad plan (the camping, not the potato salad) because there is so much to work on. But I’ve been working all week, and am still re-integrating after the New Mexico trip, so this will be good for me, I know. And we’re going to our favorite campsite that we’ve visited so far, still on the hunt for the perfect one, far enough from the city that it’s quiet and spacious but not so far that we have to drive all day to get there. I think I will be sneaking away during the days to find a coffee shop with wifi in the northwest Catskills so I can spend a little bit of time on The Smut Machine, aka my laptop, working on Butch Voices media.

Meanwhile: I’m counting down the Fridays with classic and modern butch book titles that I highly recommend because the Butch Voices Regional Conference in New York City (and then in Portland and LA) is coming up in just two weeks. If you haven’t registered yet, now is the time! We are very near capacity and can only hold so many folks in the space, so make sure you put your name down if you want to come. The workshops and the schedule have been announced, and they look fantastic, it’s going to be a great day. Stay tuned for the full announcements of events around the conference, on Friday and Saturday nights. 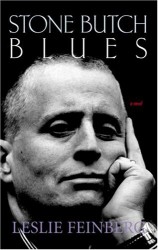 I’m really talking about classic butch titles here, so I can’t not talk about Stone Butch Blues by Leslie Feinberg. How many of us have had someone give us a copy of this book, early on, perhaps before we even know ourselves, and say, “I think this is you”? How many of us first felt like we were tapping into something larger than our own struggle when we started reading about Jess.

I had the opportunity to hear Leslie speak here in New York a few years ago, for her newer book Drag King Dreams, and it was thrilling. I love that about New York, that sooner or later, everyone does some sort of gig here, everyone comes through. It’s a magnet for some of the most amazing writers and activists and I do not discount the value of that (even in all my complaining about the big city).

If this book has been on your list for years, if you always meant to get around to it, if you kept meaning to read it, consider this a sign: it’s time. Go pick up a copy from Paperback Swap or your local indy bookstore or heck, even Amazon.

From Alyson Press, the publisher:

Published in 1993, this brave, original novel is considered to be the finest account ever written of the complexities of a transgendered existence. Woman or man? That’s the question that rages like a storm around Jess Goldberg, clouding her life and her identity. Growing up differently gendered in a blue–collar town in the 1950’s, coming out as a butch in the bars and factories of the prefeminist ’60s, deciding to pass as a man in order to survive when she is left without work or a community in the early ’70s. This powerful, provocative and deeply moving novel sees Jess coming full circle, she learns to accept the complexities of being a transgendered person in a world demanding simple explanations: a he-she emerging whole, weathering the turbulence. Leslie Feinberg is also the author of Trans Liberation, Trans Gender Warriors and Transgender Liberation, and is a noted activist and speaker on transgender issues.

Leslie Feinberg’s website has some other great information about the book, including the covers that were published in countries outside the US, a video of her reading from the book, and her afterward to the 10th anniversary edition.

When I was at the Lambda Literary Awards last year, the honored Leslie Feinberg, but she was too sick to appear and give her speech—someone else, her publicist I believe, gave it for her. So she hasn’t been doing many appearances, but I hope she is still writing.

She has been publishing quite a few photographs through Flickr and Twitter (@lesliefeinberg) if you’d like to follow her there. And of course more information about her work is over on her site, transgenderwarrior.org.

Pick up a copy of Stone Butch Blues directly from Alyson Books, or head out to your local independent queer feminist bookstore, or, as usual, if you must, from Amazon.