The Butch Voices Regional Conference in New York City (and then in Portland and LA) is coming up in just three weeks. And in honor, I’m counting down the Fridays with classic and modern butch book titles that I highly recommend. 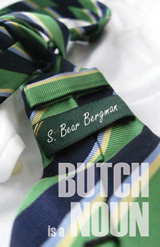 Butch Is A Noun, S. Bear Bergman’s first book, has been re-released by Arsenal Pulp Press just in time for the fall series of regional Butch Voices conferences. If you haven’t read it yet, I highly recommend it. It’s a personal collection of essays about what it’s like to live outside the binary gender system, in more ways than one, and what the identity, word, noun, verb, and adjective “butch” means to Bear.

The first chapter of Butch Is A Noun, “I Know What Butch Is,” is one of my favorite essays that I think I have ever read. Bear has a PDF of it over on hir website, if you’d like to read it as a preview to perhaps buying the book, and there’s also a great video of Bear reading the first chapter (that I have posted before, but it’s time to post again):

(Just ignore the girls in the background. Seriously.)

One of my favorite comments about the book comes from Kate Bornstein, who says: “Butch Is A Noun is a book that… a) should be required reading in any gender studies curriculum, b) femmes should read whenever they’re feeling unloved, lonely or misunderstood, c) butches should read, d) all of the above. The answer, of course, is d. Thank you, dear Bear.”

There’s lots in there for not just butch-identified folks, but also for folks who love butches, regardless of your gender.

Here’s the description of the book from Arsenal Pulp Press:

Butch is a Noun, the first book by activist, gender-jammer, and performer S. Bear Bergman,won wide acclaim when published by Suspect Thoughts in 2006: a funny, insightful, and purposely unsettling manifesto on what it means to be butch (and not). In thirty-four deeply personal essays, Bear makes butchness accessible to those who are new to the concept, and makes gender outlaws of all stripes feel as though they have come home. From girls’ clothes to men’s haircuts, from walking with girls to hanging with young men, Butch is a Noun chronicles the perplexities, dangers, and pleasures of living lifeoutside the gender binary.
This new edition includes a new afterword by the author.

There’s lots of ways to connect with Bear online—read hir livejournal, follow @sbearbergman on Twitter, and of course sbearbergman.com.

In case you don’t know about it, Bear also has a new anthology, co-edited with Kate Bornstein, Gender Outlaws: The Next Generation just released from Seal press. Pick that up directly from Seal Press, at your local independent queer feminist bookstore, or, if you must, from Amazon.

Pick up a copy of Butch Is A Noun directly from Arsenal Pulp Press, or head out to your local independent queer feminist bookstore, or, as usual, if you must, from Amazon.

3 thoughts on “Review: Butch Is A Noun”