In keeping with the tradition I started this summer, featuring a butch or femme book on Fridays to countdown to the Femme Conference and then the Butch Voices regional conferences, I’m going to keep that up and continue featuring books on Fridays.

I was going to write about The Well Of Loneliness, Gold mentioned it when I wrote up Crybaby Butch last week and I thought, “Of course! Why didn’t I have that on my list?” It’s such a classic butch book. I expected it to be droll and depressing, but when I finally read it (in a british women writers of the ’20s class in college) it was incredible—so engaging, so well written, so articulate in the feelings of this “mannish” woman’s love for another woman. I definitely recommend picking it up, if you haven’t read it.

But … in light of the ridiculous amount of depressing news this week, let’s not even go there, let’s not mention a book called The Well of Loneliness, let’s not fall down a well of loneliness ourselves. Instead, let’s move on to something much more fun: smut. 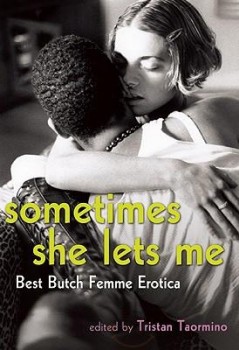 I know I’ve mentioned it here before, but it’s worth revisiting. Sometimes She Lets Me: Best Butch/Femme Erotica, edited by Tristan Taormino, is a collection of the best butch/femme stories from the 16 years Taormino was the series editor for Best Lesbian Erotica. There are very few smut books specifically and exclusively with butch/femme content; this is the most recent, and, arguably, the best.

It is steaming hot.

Here’s the description from Cleis Press:

Does the swagger of a sure-footed butch make you swoon? Do your knees go weak when you see a femme straighten her stockings? A duet between two sorts of women, butch/femme is a potent sexual dynamic. Tristan Taormino chose her favorite butch/femme stories from the Best Lesbian Erotica series, which has sold over 200,000 copies in the 16 years she was editor. And if you think you know what goes in in the bedroom between femmes and butches, these 22 shorts will delight you with erotic surprises. In Joy Parks’s delicious “Sweet Thing,” the new femme librarian in town shows a butch baker a new trick in bed. The stud in “Tag!,” by D. Alexandria, finds her baby girl after a chase in the woods by scent alone. And the girl in a pleated skirt gets exactly what she wants from her Daddy in Peggy Munson’s “The Rock Wall.” Sometimes She Lets Me shows that it’s all about attitude — predicting who will wind up on top isn’t easy in stories by S. Bear Bergman, Rosalind Christine Lloyd, Samiya A. Bashir, and many more.

Pick it up at your favorite local independent feminist queer-friendly bookstore (if you want them to stay in business, that is), from Cleis Press directly, from Powell’s books in Portland (hi, #bvpdx!) or, if you must, from Amazon.