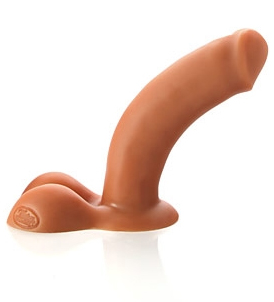 I haven’t been reviewing many products lately, on purpose. I’m getting a little bored reviewing products. Don’t get me wrong, I’m grateful to have the chance to play with these toys, and I still have some things to tell you about, but I’m being pretty picky about what I consume and what I say I will write up here and what I won’t.

This one, though, is worth a mention. 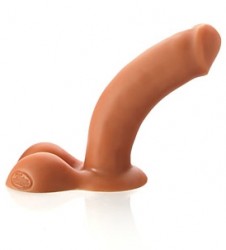 This is the new VIP Super Soft from Tantus. It’s not quite available yet, but they are taking preorders. Tantus sent one to me (and one to Diana Cage) to make it’s debut at the Butch Voices NYC Regional Conference. They sent two other cocks to be given away during my Cock Confidence workshop, which was really fun to do, and I kept this one for myself.

Especially when I was single and dating, having a packing cock was extra important to me (remember my motto: It’s better to have a cock and not need it than to need a cock and not have it), and I did quite a bit of research about what could pack and play, and what was just for packing or just for playing. It turns out, there is very little out there that can pack and play comfortably.

In my opinion, I found the Silky to be the only cock that you can comfortably pack and play with.

Until now! The VIP Super Soft is exactly made for that. So I put it to the test. Does it work?

From the former comparison on pack and play cocks, I’ll talk about this one with four components: materials, packing, playing, and realisticness.

Tantus cocks are all made from medical grade silicone, and this one is no exception. It is also Tantus’s “super soft” material, which is somewhat like Vixen’s Vixskin, but a little bit softer, and feels less porous. It doesn’t have the hard inner core that Vixskin does, however, which is what makes it easier to pack.

Yeah, it packs. It’s easy to pack. Metis Black, president of Tantus, wrote on Twitter yesterday: “Just read a review of someone who thought the Super Soft VIP was “too large to be worn discreetly” as a packer.” But in my experience, that’s not true. Packing is half in the cock and half in the pants, though—if your pants are too tight, any packer is going to be really obvious. And if that’s not what you’re going for, I’m sorry, but you’ll probably have to get some baggier pants if you want it to be a bit more discreet. I tend to go a little baggy (a style I have adopted in recent years in part because of the packing, I’ll admit), so I had no trouble with discretion whatsoever.

Because it’s soft enough to pack with, it’s kind of hard to fuck with. It is hard enough, sure, but only for some light play, nothing too heavy bang-bang-banging, because it’s going to be a bit too floppy and probably won’t stay in place. But for lighter stuff? Sure! And for blow jobs? Yeah, it’s really quite nice for that. Good length, good size (6.5″ long by 1.7″ in diameter), not so hard.

It is semi-realistic … the shaft is smooth, not veined or textured really, but it does have a head and balls, and it comes in three skin-tone colors of vanilla, caramel, chocolate (or whatever flavors Tantus calls them). I’m still waiting for a company to come out with more subtle shades of skin tones, but meanwhile we’ve just got these three basics.

It’s got a great curve to it so it stays a bit more erect than some other cocks which are just straight, and it hits some good spots while playing.

It needs a slightly smaller O-ring than I usually keep on my harnesses, so it has popped out more than once at the top while I was wearing it. Pretty easy to fix, either by just shoving it back in there or by changing up the O-ring to something smaller.

This is the video by Tantus for the regular silicone VIP, that is not the super soft material. You can see the size a little better, and the curve, so it’ll give you a better feel for how it looks.

I’m glad to add this one to my collection, and I’ll definitely keep packing with it. I don’t think it’ll break quite as easily as the Silky, which will be a good change.

The Tantus VIP Super Soft was sent to me from Tantus to review. Pick it up at your local neighborhood sex positive queer feminist sex toy store, or online from Tantus directly.