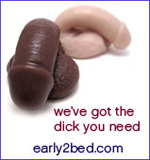 I’m adding a new affiliate to Sugarbutch this week: the Chicago-based sex toy store Early to Bed. If you live in Chicago you probably know about it already (if you don’t, now you do! Go visit), but even if you don’t live there you may have seen them online. They have a wonderful, simple site with fantastic products that anybody can order.

From the owner, Searah: “Many years ago while shopping for sex toys at a store filled with tacky blow-up dolls, raunchy gag gifts and walls of over-priced vibrators, I asked the sales person a simple question about lube. The question was met with a blank stare while she grabbed what was closest and said “um… ah…I think this one is good…?”. It wasn’t good at all and it was at that moment that my mission became clear: Chicago needed a sex shop with smart staff people, fair prices and a warm, women-friendly environment. I wanted a place where anyone could ask a reasonable question about sexuality and not be met with a snicker or black stare. … I opened Chicago’s first women-owned, women-oriented, boy-friendly, queer and trans-positive sex shop. We have worked hard to support the local women’s and queer communities and will continue to do so in the future. With our ongoing workshops and outreach events, we are striving to provide a place where people can come to learn more about sex and themselves. It is my hope that Early to Bed will be known as not only a retail store, but as a safe space to explore sexuality and foster a sex-positive community.”

In addition, they recently launched Early to Rise, their male-focused site:

Ever since our women-oriented sister store, Early to Bed, opened in 2001, one of the most frequent jokes made by customers has been “hey, you should have another store for men called Early to Rise next door.” For years we just chuckled at the notion, as there were plenty of sex shops designed for men and we were women who knew much more about women’s toys, bodies and sexual needs. Besides, with the majority of the shoppers in our store being female, it just didn’t seem necessary.

Fast forward eight years and our male clientele has grown and grown. Apparently, there are just as many men interested in a sex-positive shopping experience as there are women. With Early to Rise we are hoping to create a sex-positive site with good sex information, honest reviews of male-oriented sex toys and advice for men, written by men. Additionally, we have selected some of the finest and best-loved adult toys designed for men to sell in our online shop.

I love what Early to Bed is doing, and I’m excited to support them through my work. Check ’em out.

2 thoughts on “Early to Bed in Chicago”