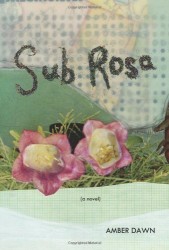 Written by Amber Dawn, a queer femme (among other signifiers—she says, “when I say “myself” I mean a queer, kinky, femme, survivor, Canadian small-town born, poor, sex-worker, feminist with a strong passion for experimental artwork and transgressive identity-based art making” in this interview with Shameless Magazine), Sub Rosa published by Arsenal Pulp Press in 2010 is a masterpiece I couldn’t put down.

It’s creepy and odd and confusing and strange, but touching and smart and beautifully crafted. Oh there were so many sentences that made me stop reading just to sigh at the beauty of their simple and elegant construction.

I read it in two days. It’s kind of hard to describe, since it has a bit of world-building and you just kinda have to dive into it in order to understand it. But that is the style of some of my very favorite books (The Sparrow, The Time Traveler’s Wife)—a book where the reality pretty much follows all the same rules as this one I live in, but there are a few key twists which make it able to better comment on the state of things. I love that.

Sub Rosa’s reluctant heroine is known as “Little,” a teenaged runaway unable to remember her real name; in her struggle to get by in the world, she stumbles upon an underground society of ghosts and magicians, missing girls and would-be johns: a place called Sub Rosa. Not long after she is initiated into this family of magical prostitutes, Little is called upon to lead Sub Rosa through a maze of feral darkness, both real and imagined―a calling burdened with grotesque enemies, strange allies, and memories from a foggy past.

So perhaps that will give you an idea. It’s creepy, don’t say I didn’t warn you, but it’s worth it. And Amber Dawn’s style is amazing, I will gladly pick up anything else she writes.