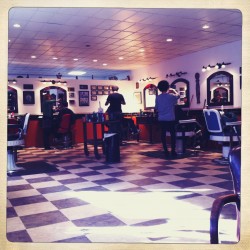 It’s been a long time coming, this ode to my favorite barber shop in New York City. It took a while to find it, but now that I have I don’t go anywhere else.

When I moved to New York City, I went to the barber shop around the corner, which happened to be on 2nd avenue and 3rd street. It was a reasonable place, the guy who owned it, I think, he was always there cutting hair and was nice enough. I never witnessed any overt homophobia or weirdness about me being in that space, though it was clear it was a dude’s space, with Maxim and Playboy and other kinds of girly magazines on the tables near the waiting chairs and with an eventual upgrade to big-screen TVs that were always playing exploitive (or so it seemed to me, anyway) music videos or sports events. Sometimes the guys in there, who were obviously the barber’s friends, carried on elaborate conversations I would have rather not overheard. Most of the time there weren’t any mentions of queer folks, but very frequently they were talking about women in ways that I didn’t like.

It was affordable, and convenient, and reliable—he would almost always give me a good haircut. Maybe not amazing, but good, and that’s important.

Later I saw a shot from Sophia Wallace‘s “Bois & Dykes” series (which fimgfound on the GAQ, thank you!) of someone getting her hair cut in that same barber shop, with that same barber, which I thought was pretty cool. I’m glad they are known, at least a little, to be cool and warm toward queers.

But then I moved to Brooklyn, and it became a huge challenge to find a place to get my hair cut. Maintaining this kind of short hair takes a cut about once a month, so I had plenty of time to try out places, (sometimes) get horrible cuts, and try out somewhere else.

I knew I needed some hip, reliable place to go, but couldn’t find it.

So I started asking around. I decided that when I saw someone with the kind of hair I wanted, I would ask them where they got their hair cut.

The first time that happened, I was on the subway on the way to Brooklyn. He had a pompadour of some sort, slicked back and poufy in the right spots. That, I thought. That’s what I want.

He got up from his seat to get off at the next stop, and I swallowed, told myself it was now or never. I don’t like talking to strangers. “Excuse me,” I said, “Sorry to bug you, I’m just wondering if you’d mind sharing where you get your hair cut? Love it.”

“Tomcat’s Barber Shop,” he answered easily, and exited the train.

I looked it up. It is in Greenpoint, near Williamsburg, known as The Hipster Neighborhood. Hm. Not sure that’s where I want to go. I continued to go to other barbers, even made a special trip down to the East Village to go to my old barber because he was reliable enough. But the cut wasn’t great. A little too quick, a little too short, not quite styled enough, just average. It was fine when I was getting faux hawks and all-short-with-a-little-bit-flippy-in-the-front, but now that I wanted something more retro and stylish and grown up, it wasn’t quite right.

Then I saw a guy in a big department store one weekend. Also with a pompadour of some sort, this time with tattoos and a motorcycle jacket. Okay, maybe it was time to step up my rockabilly look. Maybe it was time to push my style.

I kept catching glances of him at the ends of aisles, or passing each other, but not quite near enough to ask him a question. Then, magically, we both got in the same elevator to get down to the street level after we’d checked out.

“I have to ask—your hair is amazing,” I said to him. “Where do you get it done?”

Another vote for Tomcats. Clearly I had to try it out.

So I did. And I’ve been going there ever since, for more than two years now.

Actually, I’m not sure when I started going there. I’m sure it was before Kristen and I got together, but not sure how long before. Maybe a year? So maybe it’s been more than three years I’ve been going there.

I have never had a bad cut from Tomcat’s. I’ve had cuts that weren’t exactly what I asked for, but they were still awesome. I’ve had cuts from Katja (though she doesn’t work there anymore), Joey, and Derek. Erin and Chris are great, too. I always ask for Joey, but I would recommend anyone on staff.

The cuts are $20 and they will do a wash and razor shave on your neck if you want (you might have to ask, I rarely get a wash, but they will do it). You’ll also get a beer while you’re waiting, if you want that.

This is how they describe themselves:

They moved around Halloween last year, but just across the street, and the new venue is gorgeous. I’ve taken various shots the last times I’ve been there and I’d love to do a photo shoot there, eventually. I love the feel.

A few months ago, when I went in, Joey, the owner, who seems to like to talk while he’s cutting hair, was talking about his clients and how he’s still hiring barbers for the new place. “I have all kinds of barbers working here,” he said to me. “But what I don’t have is a girl with a flat top and tattoos.”

(If you know of a queer barber looking for a chair, this might be a place for them to try out!)

So he’s keeping an eye out for more queer clientele to come in, and I told him I’d tell my story and tell y’all to go check them out. I know plenty of you have regular places you already attend, but I am telling you, this place is an experience.

If you’re visiting New York from elsewhere, think about stopping here on your first day—then you’ll have a killer coif in all your vacation photos. They have all the (affordable!) products you need to keep it waxed and pomped and defying gravity, and the cuts are only $20.

I’m overdue for a cut myself, but I’m trying to grow it out for the Gay Ol’ Opry—DapperQ requested I pomp my hair up for it so I’m letting it grow. I’ll get it done later this week, probably before I leave on the birthday weekend trip, so it’ll be all set for the event on the 7th.

I have fifteen more stories to tell you about barber shops and hair and my gender and masculine spaces where I feel safe and product, but perhaps I’ll leave those for other times. Tell me, folks, where do you go get your hair cut? Is it an important event for you? Do you cut your hair yourself? What’s your barber/salon like? Is it queer (friendly)? What have you witnessed there?

(Perhaps this would be a good Butch Lab Symposium topic.)

Oh, and if you stop by, tell Joey I sent you.