Kristen and I lucked out and got tickets to see k.d. lang and the Siss Boom Bang at Le Poisson Rouge last Thursday night. I love that venue, it’s small and classic; we saw Amy Ray play there a few months ago and that was my first time there, but I hope more queer folks come through there.

The concert was kind of last minute, and we already had a big week planned, with another concert on Saturday night (Coyote Grace & Girlyman!), a day-long workshop on Saturday, and of course full days of work during the week, but we couldn’t pass it up.

She ran down there and got in line early. I joined her just before they opened the doors and we hustled to the stage the moment we got inside, and stayed there. We were far right, isn’t that stage left?, in the very front, and I snapped some good photos. 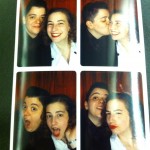 Kristen and I ducked into the photo booth after the show. k.d. was SO CLOSE. The show was fantastic. Even The New York Times says so. I was a little giddy and high after, being so close and her amazing voice and awesome performance. I’ve seen her once before, but I was in the eighteenth balcony at Radio City Music Hall, and could barely see her, aside from the shape of her white suit and bare feet moving on stage. It was so different to be so up close. She looked even more familiar, like family, with her sweet and awkward and hot butch dancing and her shy smiles and flirty attention to the audience.

I’m still kind of obsessed over her newest album, Sing It Loud. I wrote about her evolving masculine style over at AfterEllen last week:

I have lots more to say about that, actually, but I haven’t had any time to organize my thoughts. And I’m about to leave for Milwaukee, Minneapolis, St. Paul, and Madison tomorrow! I’ll update details on that “What’s Happening in April” page and on mrsexsmith.com when I have more of the exact details (I know the Madison workshop is still TBA—working on it!).

I’m loading up my ipod with k.d. tracks for the trip. I haven’t listened to Watershed in a while. 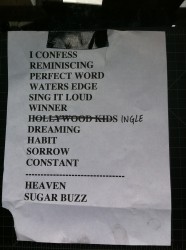 And while I got some pretty decent photos, I did notice quite a few folks around me taking video too, and lo and behold, the entire show is on YouTube. I remember these folks, with their phones and tiny cameras held up throughout the show—I was kind of hoping they would put them on YouTube, and kind of thinking they were being rude. At one point k.d. sang right into someone’s little device. I haven’t seen that one yet (maybe they were taking photos, not video?)—I don’t recall which song it was.

Almost all of the songs she did were from this new album, with the exception of “Constant Craving”, which sounded a bit different than it used to. I suggest listening to “I Confess,” “Constant Craving,” and “Sugar Buzz,” those three were especially amazing. But if you’ve got some time, and since I snagged the setlist from the electric guitarist’s station right in front of us, I know exactly the order she performed them all in, so you can watch it all, if you’d like, and pretend you were there with us.

I Confess (if you listen, you can hear Kristen’s approving trill after she sings the first “I’ll be your Daddy”):

I Am The Winner:

A Sleep with No Dreaming:

Kristen and I don’t have “a song,” like “our song,” but if we were voting for one I might nominate Sugar Buzz.

5 thoughts on ““Doing to me just what sugar does:” k.d. lang in New York City”