So, a group of folks who were on the Butch Voices board have broken off and created a new organization, Butch Nation. If you keep up with this kind of news, you probably have heard about it. See the press release Butch Nation released, Butch Voices press about it, Sasha T. Goldberg’s letter about what happened, and an interview with Krys Freeman on Velvetpark.

I’ve been asked for my thoughts on what’s going on by a few folks. To be honest, I’m not sure what I think exactly. My understanding, based on reading those links above (and more), is that it is a) partially a personal rift, based on who knows what, and b) partially an issue of semantics, about the terms “masculine of center” and “butch” specifically. I can’t really speak to what’s happened personally between the groups—I don’t know, I wasn’t there, and for the most part, I’m not that interested. I mean, my wish is for us all to get along, but people have different ideas about how to run things, and it’s ever possible for rifts to arise when working closely with anyone (in fact, it’s nearly inevitable).

So I don’t know what to say about that part. But I can speak to the semantics, and my opinion about these (incredibly loaded) terms.

(While fully acknowledging that words are powerful, and the right word is incredibly important, and identity is complicated, I also think it isn’t worth the community rifts, and I’m not eager to get involved in the nitpicking of the argument. Still, I’m putting forth my two cents.)

The word “masculine of center:”

My understanding is that the Butch Voices revised mission statement includes this word as an umbrella term, to encompass a myriad of identities. Also from the mission statement: “Masculine of center (MoC) is a term, coined by B. Cole of the Brown Boi Project, that recognizes the breadth and depth of identity for lesbian/queer/ womyn who tilt toward the masculine side of the gender scale and includes a wide range of identities such as butch, stud, aggressive/AG, dom, macha, tomboi, trans-masculine etc.”

The term is meant to be more inclusive than a term like “butch,” which is loaded for many people, and which has historically been predominantly adopted by white folks.

This isn’t the first term to come around that has attempted to encompass these many masculine queer identities—remember transmasculine? That was a hot one for a year or so there, but was declared too problematic to keep using, particularly in the ways that it wasn’t inclusive enough of trans women.

(I would argue that our masculinity is intentional, though I know there’s some disagreements about that. I’ve also heard, lately, people arguing that they are “butch women,” and therefore “not masculine,” but I’d like to challenge that there is a fundamental difference between male and masculine, and that a woman can be masculine and still be women.)

Having something to unite us is powerful, and most of the words that this world has come up with to use as an umbrella term haven’t been far-fetched and uniting enough. Is this term? I don’t know. Personally, I like the term “masculine of center.” I wouldn’t use it in a sentence to describe myself, like I wouldn’t introduce myself by saying, “I identify as masculine of center,” but I would absolutely say that I identify as butch and that I believe butch falls under that umbrella, just like it is a sort of trans-ish identity, sometimes, for me, as well. I wouldn’t correct someone if they said I was masculine of center. I also don’t tend to identify myself as a “lesbian,” I’m much more likely to call myself a dyke, or, even more so, queer, but I wouldn’t correct someone if they called me that. It’s not my identity word of choice, but it is accurate.

Holding so tight to one singular identity word and no others gets us into such rigid places. When one word and only one word is an accurate description of one’s self, then of course a larger umbrella term will feel bad. And of course one will only feel good about being connected to and associated with other people who identify with that term. The problem is, I think, that the term itself is just a starting place. It’s just the thing that starts these deeper, elevated conversations, the invitation to say, “Okay, what does that mean for you? How did you come to that word, that identity? How does that identity play out in your daily life?”

Because, like Dacia reminded me when we talked about this last week, the map is not the territory. Even if we have mapped something out with language, what matters is the application to our daily, minute-by-minute lives. And what matters is, to me, the connections that we make, the interconnectivity we find with others who are struggling through similar issues that we are, and what we do about it to move ourselves forward.

I know identity politics are incredibly loaded—fuck, the words I call myself have been vastly important to me, I’m not trying to belittle that struggle. It is huge. The act of naming one’s self, especially in the face of oppression and marginalization, is complicated and powerful. I just hope that we can have more looseness in some of these discussions, as they go forward.

One more thing about masculine of center … I’ve read a few places, in response to this Butch Voices/Butch Nation stuff, that the word “masculine of center” reinforces the binary, and that gender is more complex than a linear spectrum, etc etc.

Funny, I never think of “masculine of center” as implying a linear, 2D scale, with masculine on one side and feminine on the other. All sorts of shapes have centers, and I tend to think of the gender map as a 3D circle, a galaxy even (though that is much harder to map), or perhaps a shorthand of a 2D circle if I’m trying to simplify it a little more.

I ran across this on Tumblr not too long ago, and it’s stuck with me: 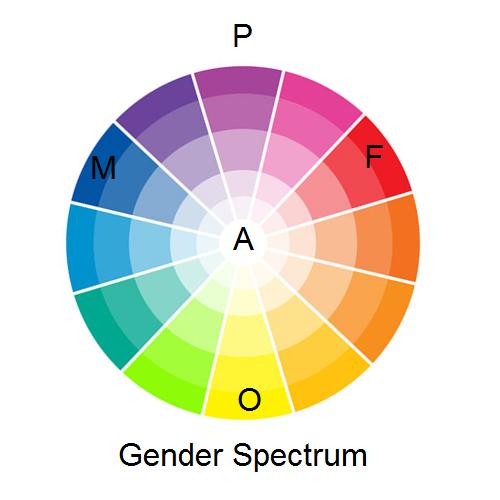 I think there are more genders than just this, but I also think it’s a pretty good place to start. Definitely a vast improvement from the linear spectrum, and I like the idea of all those gradient colors.

So my point, if I have one, is that I like the word “masculine of center,” and I think it’s useful for trying to unite many, many folks who struggle with a masculine identity in the queer worlds. As I’m continuing to be a part of building a better understanding of female masculinity and butch identity in this world, I think it is incredibly important to be talking to other people who have overlapping or complimentary experiences to my own, and to swap theories and survival tactics, to share war stories over beers, to have some respite before we go back and fight the good fights.

I believe the folks behind Butch Voices are doing an incredible job at being inclusive, open, and transparent in their vastly difficult task of bringing together dozens of identities to connect and unite in these conferences. I haven’t been to the national conference yet, but I’m very much looking forward to it next week, and as someone who has spoken quite a bit with Joe LeBlanc and other BV core members, and who was part of the Butch Voices NYC committee last year, and who this year has been volunteering as part of the national web team, I have some knowledge of how this organization is being run, and it seems professional, open, and excellent.

That’s not to say that, if I knew more of the details about what’s going on, I might not have some critical feedback, but it seems clear that they are doing their best, and I’m impressed with what’s happening.

I hope this conversation will continue next week, and I imagine it will. Perhaps as I learn more I’ll have more to share with you all about what I think and what’s going on. Meanwhile, I feel open and curious about these conversations, and interested in finding out more ways to have better, and deeper, connection, and elevated discussions around all of our identities, singular and collectively.

21 thoughts on “A Little Bit About Butch Voices, Butch Nation, and “Masculine of Center””