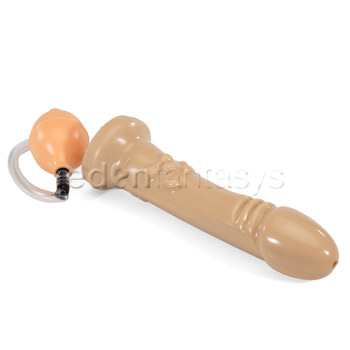 I have a confession to make:

I like dirty sex. I mean, you probably already knew that. And by dirty I mean … body fluids. You already know that my girlfriend ejaculates frequently and that I like that very much. But you might not know that sometimes, what occupies my dirty talk is about my own ejaculate, coming inside.

Some of you might be going “ew” right about now, and it wasn’t that long ago that I probably would have been right there with you. But then … I don’t know what happened exactly, but I guess my sex life got a little bit dirtier. And things like that, that before I might have gone “ew” to right away, started getting me kind of hot. And then a lot hot.

I started thinking about what it would be like to have the physical evidence of that kind of coming inside, seeing something, if not me, actually squirt, actually leave a wet spot or a puddle or some moisture on skin. When I mentioned it to Kristen, she was into it. (She’s pretty dirty, too, in case you didn’t know.)

So Eden Fantasys sent us these:

It’s clear right away that neither of these cocks are made to be used in a harness. So that’s the big negative #1. If they’re not made for that, what are they made for? They’re not exactly dyke-marketed, so are they for straight couples? Made to be hand-held? Made for solo use for a (straight) woman? Who uses these? I figured, well, I can try them out hand-held regardless, they’d be more fun with a harness but let’s just try ’em out and see what happens.

When the first, Squirt the Realistic, showed up, as soon as I opened the package it had that plastic chemical stench that permeated the whole room. Not impressed. Usually that smell is indicative of pthalates, or of some other sort of leaking chemically plastic that I’m sure should not actually be in contact with anybody’s skin, let alone be inserted inside of an orifice.

So that is pretty much an automatic out.

Some specifications, though since it’s automatically out that doesn’t matter much: it’s 7″ x 1 7/8″, but it’s got balls and a suction cup, so it’s really only 5″ insertable. Not to be a size king or anything, but that’s a little bit small. It’s especially small if it is strapped on, because you need a bit more length to make sure you don’t pop out, but as we’ve already covered it doesn’t work in a harness, so that matters a little bit less here.

Still. I will admit, you know, privately, that I liked it. I liked being able to see the action I sometimes eroticize and fetishize.

Oh, speaking of ejaculate: Mostly I’ve just used water so far, and that’s been fine. I’ve been thinking about picking up a bottle of Liquid Silk lube, because aside from being awesome lube it is a pretty great consistency and thickness and color to mimic come. The packages for both of these cocks suggest using some sort of egg white + sugar recipe, but sugar is actually really bad for the pH of pussy (maybe these are made for gay boys?), so I won’t be doing that. Water’s fine, lube will probably be even better.

It won’t be a frequent toy in rotation, I’m sure—I received it this summer and it’s been infrequent at best—but I’ll be keeping it around. Especially for the affordable $12.99, it’s worth having around.

Please make a better one of these. Make one for trans guys, for dykes, for dirty kinksters who actually want it to be able to be strapped on. Why don’t we have a good product like this out on the market? Tantus? Vixen Creations? Who’s gonna be first, hm?

Squirt the Realistic and Squirty Peter were sent to me for review by Eden Fantasys. Get more cocks or other sex toys over at Eden. Thanks!