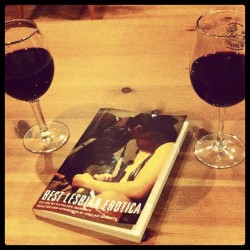 BLE is here! The first copies arrived last week and we read the first and last story out loud, and of course found a few typos. (Can’t have everything!)

As usual, series editor and reading series host Kathleen Warnock is hosting the New York City release party on December 15th at her Drunken! Careening! Writers! series at KGB Bar in the East Village. (When I have the Facebook invite and such I’ll let you know.)

Meanwhile, though, here’s my introduction to this year’s Best Lesbian Erotica. I’m really pleased with how it turned out, there are a lot of great (dirty!) stories included by many of my favorite writers. Pick it up if you get a chance. I really hope you like it, and I’d love to hear what you think after you get a chance to read it.

I know what I want.

I knew exactly what I was looking for when I read the submitted stories for this anthology: dirty, smutty, smart about gender, smart about power, packed full of sex with the bare necessary descriptions of setting and context, and, oh yeah, good writing. It doesn’t have to be dirty in my personal favorite ways—with sultry accoutrements and costuming like stockings and strappy sandals, or with strap-ons and lots of fucking, or with blow jobs and dirty talk. I like stories where the characters are so turned on and lusty that I feel it too, even if it is not my particular kink or pleasure. I like stories with unique descriptions and rolling prose and insatiable narrators and rising and falling action. I like stories where I want to recreate the action for myself, when I am inspired by the delicious positions and settings and words.

I began to find other books, short stories, and essays that helped move my budding baby dykery along: Nothing But the Girl—oh, swoon. That essay by Anastasia Higgenbotham in Listen Up: Voices From the Next Feminist Generation. Cunt by Inga Muscio. Breathless by Kitty Tsui. And the Herotica series, which was erotica for women before Rachel Kramer Bussel’s prolific erotica editing career.

These books are filled with three powerful things: 1. women, who are 2. empowered, 3. about their sexuality (which, by the way, does not involve men). Even the books themselves are threatening.

For queers coming out and into our own, they are a path.

Fast forward a few years and I’ve managed to snag myself a lesbian bed death relationship, going out of my mind with desire and disconnection. I stopped writing, because the only thing that I was writing was how miserable I felt, how much I wanted out of that relationship—a reality I wasn’t ready to face. I decided that to work off my sexual energy, I would either go to the gym or I would write erotica. Well, I ended up writing a lot of erotica, rediscovering this tool of self-awareness and self-creation that had led me to smut in the first place, and I began writing myself back into my own life, back into the things that I hold most important: connection, touch, release, holding, witness, play.

Writing these stories, for me, has not been frivolous. They have not been nothing. They are not fluff or useless.

For me, they were a path back to myself when I got lost.

When I was lost, I had no idea what I wanted, aside from the basic daily survivals: work. Eat. Pay bills. Sleep. Shower. But when I wrote, when I connected with my own desire, I felt a little piece of me bloom and become in a bigger way. I felt more like myself.

I turned again to the great books of smut to help me find myself, to help me find a way back to a partner, a lover, a one night stand—hell, even an hour with a Hitachi was sometimes enough. The Leather Daddy and the Femme. Mr. Benson. Switch Hitters: Gay Men Write Lesbian Erotica and Lesbians Write Gay Male Erotica. Back to Basics: Butch/Femme Erotica. Doing It For Daddy. And Best Lesbian Erotica, always Best Lesbian Erotica. I still eagerly buy it every year to see what the guest editor’s tastes are, to see what the new trends are, to read the emerging new writers, to get my rocks off.

I rediscovered what I wanted through reading smut and writing it. Through carving myself a path in connection with a lineage of sex positive dykes and sex radicals and queer kinksters and feminist perverts.

After six years of writing and publishing erotica, I am thrilled to be a guest editor for the series which sparked me into queerness in 1998, thrilled to be choosing stories for the same series that published my very first piece, “The Plow Pose,” in 2006, which helped spark me back to myself. It is so exciting to be contributing to this queer smut hotbed that Cleis Press has helped nurture all these years, and I’m so glad to continue to be part of it in new ways.

I know what I want, now. And lesbian erotica, or as I prefer to call it, queer smut, has helped me not only visualize what is possible, but create a path toward getting what I want.

The stories in this book reflect my taste, my favorites, my personal hot spots, certainly, but also the best-written stories from a large pile of well-written stories by some of my favorite authors, like Kiki DeLovely and Xan West. There are some less-well known writers in here whose work you may not be familiar with, yet, but who will leave an impression on you, writers like Anne Grip and Amy Butcher. I found dozens of moments of signposts, signals directing me toward myself, words illuminating my own meridians of ache. With each story, with each act of lust, with each dirty command or submissive plea, I rediscovered my own want.

I hope you find some of what you want within these pages, too.

3 thoughts on “I Know What I Want: Introduction to Best Lesbian Erotica 2012”