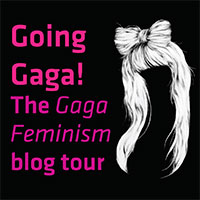 I—like, I suspect, many of you—was first introduced to Jack Halberstam’s work in college, where I read Female Masculinity in a gender studies class. Jack’s work has been largely influential on the gender binary critiques and to many people that I have studied and read since, and of course influential on my own ideas about gender and performance and masculinities too.

And, he’s got a new book out! The book is called Gaga Feminism: Sex, Gender, and the End of Normal and it’s published by Beacon Press, officially released yesterday, September 18th. It’s an incredibly readable book—like Jack said in my interview with him for Lambda Literary Foundation earlier this year, it’s on an unacademic press and intended for a wider audience. So even if you’re not a theory buff—and I’m not, though I do love theory—it’s a very good read.

(It’s intimidating to interview one of your mentors! Thanks Jack!)

1. When you discuss the concept of “gaga feminism,” which you say is a feminism “that recognizes multiple genders, that contributes to the collapse of our current sex-gender systems, [and is] a feminism less concerned with the equality of men and women and more interested in the abolition of these terms as such,” (p25), I find myself identifying deeply. I run in many communities which are more invested in that than in the analyzation of the male-female binary, and often feel disillusioned with the mainstream feminism movements which have less concepts of breaking down the system and more that seem to maintain it. How can gaga feminism help queers and genderqueers and other marginalized communities get our message farther into the mainstream, to continue to influence the larger culture? What barriers keep our gaga feminist perceptions of gender from reaching the mainstream, and do you have any suggestions for how to continue the activism of working to break down those barriers?

Great questions Sinclair! As you say, it is frustrating to see so many people acting as if male and female are totally stable categories and as if all the changes in technology, in social formations, in sexual identities and in the visibility of queer bodies have made no difference whatsoever! I hoped and still hope that GAGA FEMINISM would have some appeal as a more mainstream and readable book and that it would be able to circulate complex ideas about sex, gender and fast-changing technologies of gender in an accessible and fun way. That said, there have been a few books out recently like How To Be a Woman by Caitlin Moran, The End of Men by Hanna Rosin and Marry Him by Lori Gottlieb that purport to be feminist analyses of men, women, marriage, work, love and family but actually they mostly shuffle around the same old cliches about hetero reproduction and hope for the best. GAGA FEMINISM begins with the premise of taking a longer tradition of anti-marriage, anti-capitalist feminism seriously and joining it to new queer theory and queer forms of life.

2. I loved your writings about The Kids Are All Right (which start on p54). I enjoyed that film quite a lot and have had many elaborate conversations about its construction, but you articulated some new things I hadn’t heard. I am especially curious about what you said about depictions of relatively sexless long term (lesbian) relationships, as I have been theorizing a lot lately about keeping the spark going in a long term commitment. You’ve been with your partner for many years now—do you have any tips or suggestions about staying sexually connected and satisfied while building something long term?

Well, my point there was that straight culture likes the idea that lesbian long-term relationships are more prone to “fizzle out” that others because women are the kindling rather than the spark when it comes to romance…pardon the metaphor but you get my point. Heterosexual mainstream conversations about desire love to depict women as the ones who create an environment for love and romance and men as the ones who set the whole thing on fire. For this reason, when you have two women, the old narrative goes, you have a lot of love and cuddling but no real…spark! So, The Kids Are All Right feeds into that narrative and assigns all the sexual energy to the sperm donor dad. But that was just one of many reasons I found the film disappointing. As for tips on staying sexually connected etc…sorry dude, I am a terrible advice columnist!!

3. You talk quite a bit about butches and butchness in this book (p86). I do a lot of organizing around butch identity and community, including some work for the BUTCH Voices conferences (and of course your book Female Masculinity has been a huge influence on my understandings of genders). You mention the concept of stone and melting the stone in particular, which is something that I discuss and think about often. I tend to define stone as “having control over how one’s body is touched,” which is not quite the same as impenetrable or not ever receiving sexual pleasure or stimulation. Have you noticed that the caricature of stone butches as “rigid or immobile or frozen” (p86) has changed as we are entering an age of gaga feminism, with more depth of understanding and multiplicity in our definitions of gender roles in general? How can we continue to break down those frozen stereotypes and build something unique and open, with more room for people to be expressing themselves authentically and not feeling stuck in limitations of labels? 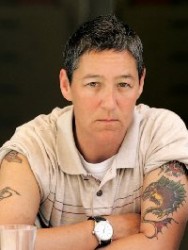 Yeah, definitely. I was just using the example of the stone butch in GAGA FEMINISM in order to say that we assign pathological narratives to masculine behavior when it appears in the butch (inflexibility or impenetrability becomes neurotic) but not when it appears in a man. If the man does not want to be penetrated, then he is, well, normal! And in fact, if he does want to be penetrated, then he is suspect. I think GAGA FEMINISM is about recognizing the rapidly generated new forms of desire, embodiment, orientation that proliferate all around us and developing new systems for naming them, owning them and inhabiting them.

J. JACK HALBERSTAM is the author of four books, including Female Masculinity and The Queer Art of Failure. Currently a professor of American studies and of ethnicity and gender studies at the University of Southern California, Halberstam regularly speaks and writes on queer culture and gender issues and blogs at BullyBloggers.

Giveaway! I have one copy for one lucky commenter … 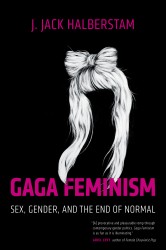 Thanks to Beacon Press, I’ve got an extra copy of Gaga Feminism: Sex, Gender, and the End of Normal to give away. I’ll pick a number at random on Monday, the 24th of September, and the corresponding commenter will get the copy.

In order to enter, simply leave a comment on this post and tell me one influential book you’ve read about feminism, or one book about gender, or something you love about Jack Halberstam, or something else entirely. Make sure you leave a valid email address; anyone can enter. I prefer to mail the book to someone in the US, because I’ll be paying for postage—so if you are outside the US, I might ask you to kick me a few bucks to cover the cost of mailing you the book.

Tomorrow’s Gaga Feminism Blog Tour post will be at The Qu—check it out.

Gaga Feminism was sent to me from Beacon Press to review. Thanks Beacon! Pick up your own copy at your local feminist queer bookstore, or, if you must, from Amazon.

34 thoughts on “Gaga Feminism Giveaway! And Q&A with Jack Halberstam”