I’ve been in Dallas with Kristen’s family for the last few days for the Thanksgiving holiday. We did a Dirty Queer Sex Tour reading on Tuesday that Lillith Grey helped put together, which was fantastic—it is so fascinating to me how each of the Dirty Queer Sex Tour stops have been so different. I think (hope aim for) it reflects the local culture well, which is great, because as much as I’d love to introduce the Say Please book around to all the different folks who might be interested in it in all the different cities, the cultures of BDSM and queerness are actually slightly varied depending on where you are. Having interacted with those cultures primarily on the internet for the last oh, fifteen or eighteen years, I didn’t really know that until I started touring more. And when I go around and visit colleges in various different cities, I get a small taste of local culture, but usually it’s more like the local college culture, which isn’t quite the same.

I wish I could explain how each of the readings were different, but it’s hard to put my finger on it exactly. Sometimes it seems like one is more butch/femme, one is more genderqueer, one is younger, one is old school, one is more trans focused, one is darker in material and content, but I also don’t really want to generalize that specifically about identities, because I don’t really need to draw the conclusions that therefore the city that that reading was in is therefore more trans or genderqueer or butch/femme. But the differences have been big, and are really interesting. 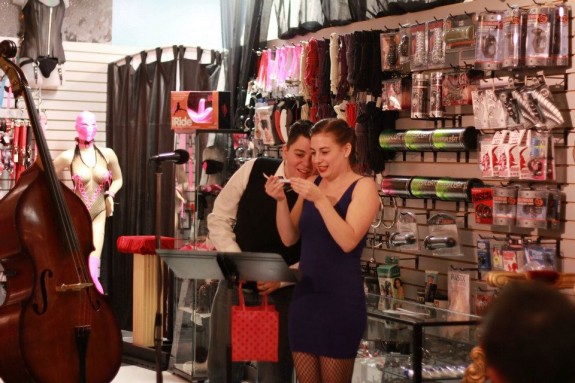 Thanks to photographer Amy Price for these beautiful photos from the Dallas Say Please reading! I don’t know if that Facebook link will work but I think it will—check it out. We had a beautiful sexy lineup and the store looks so pretty.

Lillith and her partner Synn (who is the 2012 International Ms Leather!) took us around to the Dallas Eagle and to the Round-Up, which was a gay boy bar (with very mixed company) that has two stepping and line dancing pretty much every night. Kristen and I don’t really know how to two step (though I did okay following while Synn led, and I led Kristen around the floor in a circle at least once), but we have taken some east coast swing and it was so incredibly fun. She and Lillith and some of their friends also had so much fun line dancing. I did a few songs—but when they get really complicated, it’s so hard to keep up. We vowed to go out to Big Apple Ranch more frequently.

Oh and speaking of IMsL—it’s official, and I can announce it now: I’m going to be a judge for the 2013 International Ms. Leather contest! So I’ll be in San Francisco in April 2013. 2012 was the first year I attended, and it was very memorable and fun, and I definitely felt like the folks there were my people. I’m really looking forward to meeting more of the folks who make the contest run and to seeing behind the scenes a little bit—always my favorite way to see an event.

Kristen and I did a lot of other things in Dallas, aside from hang out with her family and eat delicious food, like go around to Kristen’s old haunts, her favorite restaurants, her high school, her old house. It was great to see where she came from. I love having a sense of a city. We rented this little zippy car, some Volvo sports car that I didn’t even know existed, not that I’m really a car person, and it was so fun to drive. Driving around a city gives me a much better sense of it and I loved that I got to experience it.

I didn’t get any gigs in Dallas, aside from the Dirty Queer Sex reading, but maybe I will get some interest from some of the local colleges and come back another time.

Kristen and I are better. Things have improved since that big explosion and I think that couple’s therapist will be helpful. I’ve been containing my feelings much more, haven’t been lashing out, haven’t been quite so wildly all over the map with my feelings. Or rather, I have still been, but I haven’t been showing it as much. This is not quite the same as bottling them up—it’s more like, I know that bringing things up to Kristen doesn’t result in greater understandings right now. I’m making note of things that are difficult or upsetting, and trying to breathe through it and put it aside at the moment, and work through it later with the couple’s therapist or some other moderator because Kristen and I can’t seem to get out of our patterns well enough to actually discuss things to a healing conclusion lately. It’s not a long term solution, this lack of sharing, but it is a temporary solution, and the most important thing right now is to stop fighting. It does seem to help to just not share my feelings—and to not talk about the other people that she’s dating. There are still some issues here, things I don’t know how to resolve, but our couple’s therapist basically said that right now isn’t the time to resolve them, isn’t the time to go into the deep patterns and try to rewire them, because we’re both feeling so defensive and attacked, both feeling pretty wounded, so we need some time to just be with each other and be kind and take time to do things that feel good before we can get to a place where we have enough energy and patience and flexibility to do more excavating and fixing of the patterns and ruts that we’ve developed.

I still don’t know where that will bring us, ultimately. But I am trying to breathe and focus on the “healing power of pleasure,” which is one of the core Tantra principles. I keep asking myself, and Kristen, whenever we are stressed or overwhelmed with all these emotions: What would feel pleasurable for your body right now? I think that focus has been helping us relax and enjoy each other.

I’m in Houston now, and I’ll be visiting Rice University on Thursday, but aside from that I’m visiting with Rife. We’re outside of the city actually, on his family’s ranch, and at the moment, he and his dog are out doing something with the horses, a little practice training, it looks like. I’m sitting in the very pleasant breeze looking out onto a pasture with beautiful old trees and a wind chime nearby. I have a cup of coffee and my pen and notebook and my computer (and wifi!), and the only things on my agenda today are some hours of work, some reading, some walking around this beautiful land, some play with Rife, some good food, some stargazing later if it’s clear. The more time I spend away from cities, the less I seek to go back to a city. I love the grass under my bare feet, love the sounds of the wind in the trees and the birds and the chimes. I’m soaking up as much of it as I can.

4 thoughts on “Thanksgiving in Texas”