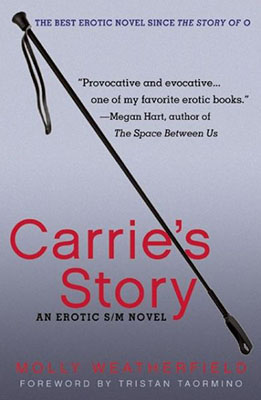 Today is my day on the Carrie’s Story blog tour. I devoured this book in the beginning of March as some escapist fiction, hoping for something easy to read that was easy enough to digest without a lot of deep thinking. And while it is easy to read and easy to digest, it isn’t without it’s deep thoughts. Carrie has very little experience with kink and submission at the beginning of the book, but by the end she is an auctioned slave, having gone through trainings from her (temporary) master and trainings from the Madame of the slave auction herself.

I love the little moments where Carrie submits, not because she is comfortable being taken by this person or that person, but because she trusts the woman who created the entire system. And by submitting to the system, she is submitting to that woman in particular. It’s a beautiful explanation of how M/s is larger than D/s, and how M/s is not about individual interactions.

I’ve been more and more interested in M/s theory lately. I’ve got a lot of thoughts about how D/s and M/s are different, and I’d love to write about that more soon here—mostly I’m still chewing on the differences and formulating thoughts. I’ve read through Raven Kaldera and Joshua Tenpenny’s book, Dear Raven and Joshua: Questions and Answers About Master/Slave Relationships, which is amazing and which I may turn around and re-read from the beginning right away. It’s long and detailed, well-organized and easy to read in a Q&A format. Unfortunately (and fortunately) it’s been teaching me a ton of things that I’ve been doing wrong … but I’ll leave that thought for the moment and share you some more details about Carrie’s Story. I highly recommend the read.

Day one had begun with the very chic fortyish woman holding me tightly by the nipple and telling me, “We will all want to use you during these trials, but first, we will want to know how obedient you are, how much self-discipline you have. You are accustomed to being in restraints?”

They all laughed a little at this, and she told me that they didn’t believe in that sort of thing for these trials. “We would not mar the woodwork of this pretty room with any of those little hooks and eyes, I think you call them. You will do everything we command, and you will be beaten, and bear it beautifully, without any collars or cuffs, without being tied or held in any way.”

I gulped. “Yes, Madame Roget,” I agreed, though I was terrified at the thought of not being tied down while being beaten. Too bad we couldn’t rig up something using all the hardware hanging off the jacket of her Chanel suit.

Quel jour. I had no idea if I could really do it, and I wasn’t perfect by any means. Twice, that I can remember, and maybe more times than that, my hands flew up to my breasts to protect them. This was at least one of the “technical” things Jonathan hadn’t thought of. He, of course, loved to think of crafty ways to embed hooks and eyes all over his house and so, stupidly, hadn’t realized that the rest of the world might not. I think what got me through it was that I was so pissed at him for not considering that this might happen, and so determined to best the situation in spite of him. Thanks a lot, coach, I remember thinking, seeing him out of the corner of my eye, over there on his delicate little chair. I thought of that creep who brought those terrified little four-foot-eight-inch American gymnasts to the Olympics, to be entirely outclassed by the Russians and Romanians.

That day ended very abruptly, or at least I thought so. I was on my knees in the center of the room, having just thanked the board, one by one, and very sweetly and clearly, though in a bit of a choked voice, for a brisk beating they’d just administered to my breasts and thighs. (Oh, and in French—we switched to French for the afternoons.) And, no, they didn’t hold up any cards with little numbers on them to rate my performance. They hardly acknowledged me at all, in fact, but Madame Roget turned to Jonathan and curtly said, “Bring her around tomorrow at ten, and we’ll continue.”

“Thank you, Madame,” Jonathan replied, getting to his feet and hurrying to help me up. “I will. Thank you all.” He spoke like the well-brought-up little boy he must have been once. And I realized that part of the entertainment, for him, and maybe for me as well, was that he was on trial too.

When we got back to the hotel room, he grabbed me, and, very uncharacteristically, pushed me onto the bed practically into a backward somersault, pulled up my skirt, and started fucking me. My shoes went flying, and I felt a garter unsnap painfully against my thigh. Against my cunt, my belly, my legs, I felt his pants zipper and a million buttons and buckles digging into me. It was silly, clumsy, uncomfortable, but I understood. It was what I needed, too. The long, horny, ritualistic day of trials, subtleties, pain, performing, and politesse had gotten to both of us, and what we both wanted was mindless, exhausting, low-tech vanilla fucking. In and out. Bang bang bang. Friction. I closed my eyes and came a lot, moving however I pleased and making lots of noise and trying to forget that there were such things as rules or form or sensibility.

Still, you don’t forget a year of slave training just like that, so a long while after, when I had recovered enough, I crawled to the foot of the bed and knelt there at attention (although I was unsure what to do about the skirt that was still up around my waist and the stockings down around my ankles). Jonathan looked at me for a while. Then he frowned, sighed, and finally said, “Oh hell, Carrie, I don’t think I can maintain any rules tonight, not after watching those pros do it all day. Let’s just take showers and zone out. Are you hungry? Want to do room service?”

Which was how we passed the next three evenings. We’d come back from the trials, pull off our clothes, fuck real hard, and then eat. During some break in the second day trials, Jonathan had gone out, found an English-language bookstore, and scooped up a shopping bag full of mysteries and sci fi. We weren’t following rules anymore, which meant we could say anything we wanted. But we were afraid of saying wrong or embarrassing things to each other. At least I was. So the books kept us busy during those weird, wired, exhausted, polite, and oddly companionable evenings. We’d dive into them, every so often one or the other of us finishing one, maybe briefly recommending it, or tossing it across the room, proclaiming it a “turkey, guessed it halfway through, don’t bother.”

On the fourth evening, the rock ’n’ roll/cyberpunk story I was racing through reminded me of thrash music and I thought of my Primus T-shirt, packed up with my stuff at Stuart’s. I decided that if I passed the trials I’d tell Jonathan he could have it as a good-bye present. Thanks for the memo- ries, I guess, and for the strange intimacy, even if we’d only had about four real conversations in the space of a year and a half. Good-bye, and thanks, also, for finding me a job that was not just a job but an adventure. So long, accomplice, collaborator, coconspirator.

Just then, there was a knock at the door. Jonathan went to get it. There were two European guys in suits and short squared-off haircuts, looking like the cops in La Femme Nikita. They were from the auction committee, though, and they were here to tell us—well, Jonathan, really—that I’d passed the trials. I could hear that much anyway, though the one of them who was doing the talking, the only one who knew English I think, was speaking very softly. I heard Jonathan tell him, “I’ll fax them the papers within an hour. And I’ll get her for you now.”

I hadn’t known they came for you in the middle of the night. And I don’t know if Jonathan had either. He walked over to me—I was sprawled on the bed in a hotel bathrobe and a pair of his socks—and pulled me to my feet. “You’re in,” he said, “and you’re not allowed to speak anymore.” So much for the T-shirt idea. Or for even a so long. “Take off your clothes,” he continued in an expressionless voice. “You’ll go with these gentlemen.”

They were standing by the door watching without much interest. I felt a little sorry for them; this had to be the dullest master/slave scene they’d ever barged in on. I pulled off the socks and robe, folded my glasses on top of the open book, and walked over to them. They produced a pair of high heels and a trench coat and helped me into them. Then, silently, they hustled me out of the room and shut the door behind them.

Molly Weatherfield, the pen name of Pam Rosenthal, is also the author of Safe Word, the sequel to Carrie’s Story. A prolific romance and erotica writer, she has penned many sexy, literate, historical novels. She lives in San Francisco. You can find Molly on Facebook at https://www.facebook.com/MollyWeatherfield and on Twitter at @PamRosenthal (https://twitter.com/PamRosenthal).