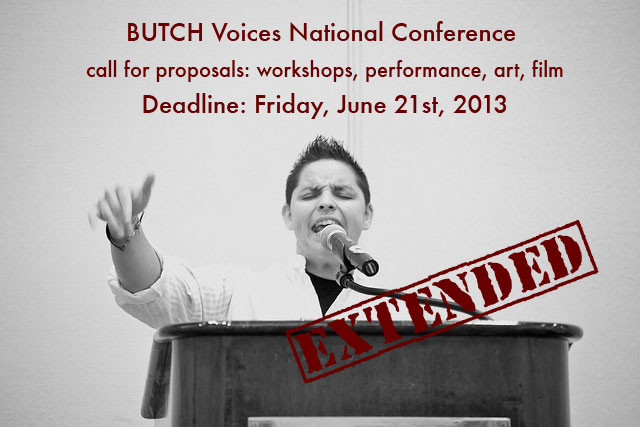 From the BV press release:

BUTCH Voices third national conference has extended our call for proposals to June 21st, 2013. We are currently seeking workshops submissions of all kinds, and in all formats: films, performances, skill shares, readings, meditation, and movement—anything and everything that addresses the cultural, sexual, emotional, physical, and psychological relationships that arise in the lives of butches, studs, tombois, aggressives, machas, etc. We are open to all perspectives–queer, feminist, womanist, neither or beyond! We particularly encourage proposals by and for people-over sixty, under twenty-one, by and for the working-class, people of color, and persons with disabilities.

“We have incredible submissions so far,” said Joe LeBlanc, conference founder and board chair. “We have received so many authentic, solid, and heart resonating responses that we want to leave the window open just a bit longer.”

The BUTCH Voices National Conference, happening at the Marriott Oakland City Center in Oakland, California on August 15-18, 2013, has happened twice before and boasted community conversations and regional conferences between national conferences. Each national conference has brought together hundreds of people to discuss issues related to masculine of center identities.

“There is currently a thread on our facebook page,” said Sinclair Sexsmith, media chair of the BUTCH Voices board, “discussing what kind of workshops the attendees would still love to see happen. Ideas range from latino/a butch identity to butch trans women to butch fashion to youth to allyship to hairstyles. We are expecting a wide range of offerings at the third conference. As always, the programming committee’s choices will center around our three initiatives: community building, social and economic justice, and physical and mental health. But there will be a lot of fun, playful things thrown in there, too.”

The full call for proposals is on the BUTCH Voices website at http://www.butchvoices.com/call-for-proposals .

BUTCH Voices expects more than 300 attendees for the weekend gathering in August. More information can be found at www.butchvoices.com.