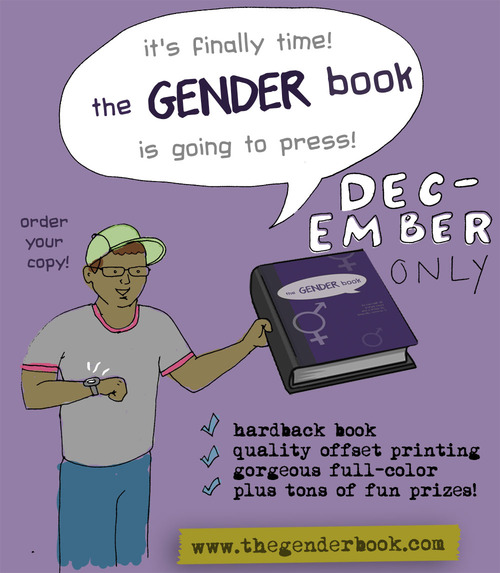 I am extraordinarily excited about the official launch of printed, finalized copies of The Gender Book!

The Gender Book is a project by Robin Mack, Jay Mays, and rife (yes, my rife), who have been working on it for years, literally years, along with hundreds of folks who have contributed and offered constructive criticism along the way. The whole project has been released one page at a time for anyone interested in commenting and giving feedback. Because of that, it’s more than just one book written and illustrated by three folks—it’s a community collaboration, one that has been generated (I mistyped “genderated,” hah) by the communities that the book attempts to explain.

This is a big deal.

I have never seen another book like this out there. There are no genderqueer or trans or nonbinary primers in the way that this book attempts—and in my opinion, succeeds—in being.

Robin, Jay, and rife don’t have any specific gender credentials. They don’t have gender degrees, they don’t get paid to study this stuff. This book was a community service. They looked around and saw that there was a significant lack of a clear, concise primer on non-binary gender, and decided to take on the project to make one. Partly because they didn’t have their own research to rely on, they turned to the communities, and launched surveys to get content for the book. Hundreds of people responded to the surveys, and the book has been slowly built from the data, and from the experiences of rife, Jay, and Robin’s lives in the genderqueer and trans and gender non-conforming communities—with their friends and lovers and acquaintances.

See first, they made a mini Gender Book, now called the Gender Booklet. It was just a quickie, but that was so successful they decided to make a full-length full-color book. The book has been available as a PDF download for free from thegenderbook.com since the first draft was complete, though it has never been available in print.

Pre-order the book now, and support their crowdfunding campaign to get this

Here’s The Gender Book’s origin story according to the creators:

Three years ago, my friends and I noticed a ton of discrimination and just a general lack of education around gender in our worlds. We said, “Why isn’t there just a book you can hand your therapist and say here, read page 29 and you will understand, see you next week.” Based on your site’s content, I think you know what I mean. We thought there should be a resource you can read in one sitting. It should be illustrated and as fun as a kid’s book while going into some real depth and true stories. The book should help people come out and educate their friends and family. Surely a book like that exists, right?

Nope … It didn’t at the time. We (a writer, an editor and a genderqueer artist-that’d be me!) decided to make our own book. After three years and countless hours of work, drawing, researching, editing and coloring pages, the manuscript is now complete and we’re ready to go to press.

The Gender Book is launching a crowdfunding campaign in December to get printed hardback and paperback copies of the book made available to those who pay for one.

The final book is 94 pages, includes the original, updated Gender Booklet as a tear-out, some reprints of the original surveys the book is based on, and more. It’s made to be accessible to everyone—from queers inside the gender nonconforming communities to gay guys and lesbians who don’t understand the new politics of gender to your grandma.

Check out some of my favorite images from the book: 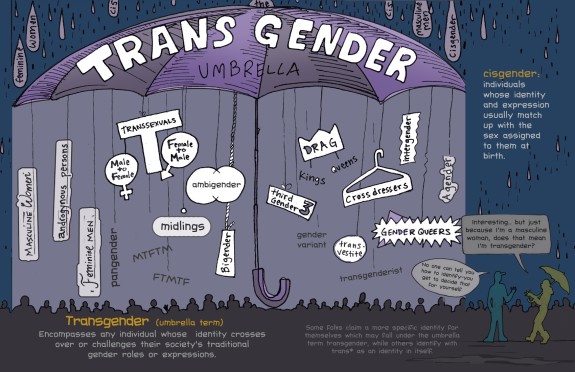 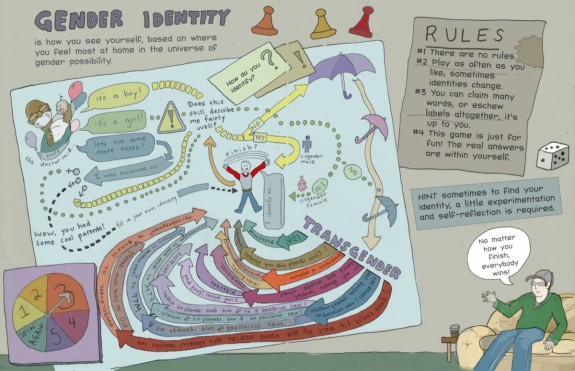 There are other perks, too. Like for example, some prints of the creator’s favorite pages from the book, custom art, coffee the creators—all sorts of things.

And, if you are so enamored of this project that you want to support it and help out, you can become a Gender Scout, which is the super exciting Gender Book street team, who earns badges doing things like writing poems about gender, making videos, or writing articles (like this one) to help spread the word about the book. I’ve had fun contributing things like this:

This is one of my favorite videos from The Gender Book, which shows the processing of making a page from start to finish, and is basically rife’s creative process sped up 200 times to see it in fast-forward (make it full screen to get the full effect):

OH WAIT! UPDATE: The Gender Book has been fully funded! Holy crap you guys. I’m so excited to hold a book in my own hands in the spring!

(Also, did I mention that I bought the very first copy?! I’m so proud.)

BUT while that means that—whew—I won’t be posting every day about how you should fund The Gender Book, you still should STEP ON IT and donate to get your copy of the book. This is the main (only?) way to get a copy, I don’t know if it’ll be printed again.

So go donate, & get your copy!

5 thoughts on “The Gender Book’s crowdfunding campaign is funded! But you should still go buy a copy for yourself right now”