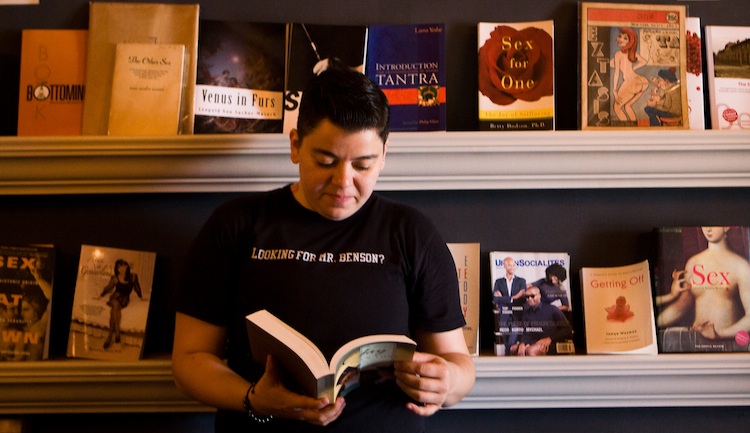 Late. Because April was somehow nutso. Traveling to Seattle plus my birthday plus the boy’s birthday plus IMsL plus the Gender Book launch party at the CSC plus I took a temporary social media consulting gig plus it’s SPRING plus we took a swing class plus the new venture (now called Body Trust) had a strategic planning retreat and officially launched www.bodytrustcircle.com and the August Portals of Pleasure retreat and that took so much time and energy and planning. Also I am this close to having a space to do bodywork in San Francisco and I’m really excited to gear up for more one-on-one sessions.

So I didn’t read as much this month. Or at least it feels like that—my GoodReads account reports 8 titles, which is about as much as other months.

I picked up and read the Right Brain Business Plan book by Jennifer Lee a few months ago as part of my personal study through the queer creative business group I’m involved in, and found it useful. I picked it up again because the author was on Creative Live doing the Right Brain Business Plan workshop for three days, and I tuned in to it mostly in the background as I was working, but I’d go back and forth to the exercises as I was getting other things done. It was great to think hard about some of the business plan things and I do like her approach.

I’ve heard a lot about the film adaptation of the graphic novel Blue is the Warmest Color, but I hadn’t heard as much about the book. I picked it up from the library as an ebook, which was interesting, to read a graphic novel on my iPad, and it worked pretty well. (Also I love the library!) I had heard a lot about the extensive 10 minute lesbian sex scene (“there’s rimming!”) but I also heard it was a) depressing and b) kinda by or for straight people, and not particularly by and for queer people, so I haven’t rushed to see it. I’d be curious to, now that I’ve read the book. Mostly I was really struck by how immensely fucking tortured the coming out process was/is for this particular young lesbian protagonist living in France. I am so lucky to have a supportive family, and have prioritized queerness in my life and thus lived entrenched in queer communities, so I have never experienced it so torturesome … but I do understand that people still go through that kind of process. It was a good reminder to me of the emotional depths that can happen in an identity formation, but also part of me, while reading, was more like, “Really? This seems awfully over-exaggerated.” I’d be curious what the relationship is of the story to the author—I don’t think it’s memoir.

The Edible Garden came from Cleis’s life imprint, Viva. Now that I actually have a backyard (first time in my adult life!) I am pretty excited to try to grow some stuff. Preferably some food stuff. So I’ve been doing a little bit of garden tending, getting it ready to plant, and this month kicked into for reals spring gear, so rife and I stepped it up a bit. We planted kale, cherry tomatoes, some spring onions, sugar snap peas, and a few other things.

I liked looking through The Edible Garden—and the other one, Grow Great Grub—but it didn’t have all that much useful information in it. For example, some bird keeps eating our sugar snap pea leaves and tops, but neither book said anything about how to keep pests from eating your delicious food. They are both more inspiration than practical advice, and while I still appreciate the pretty pictures and the inspiration to go dig outside, I am starting to get to the point where I need the reality advice part even more. Which is kind of a neat sign! Grow Great Grub came to me as a holiday gift from my aunt (via my Amazon wishlist).

I read the graphic memoir Pregnant Butch by AK Summers this month. I heard about it through a Lambda Literary review and was intrigued. I think it’s worth reading, but to be honest I was less interested in the pregnancy part than I was in the extensive commentary about butch identity, and sometimes the extensive commentary about butch identity was infuriating, heartbreaking, or depressing. The author—who I assume is the same as the protagonist, Teek, though their names are slightly different—is a bit older than me, maybe 10 years even, so they come from a slightly different generation of butches, and the content about younger butches being extinct, butch flight, and the prevalence of butches transitioning to men was hard to read. At one point Teek explicitly referred to herself as—and drew herself as—a dinosaur. It bugs me to see butch being presented as an antique, out-of-fashion, and outdated identity—I really don’t think it is. But then again, I kind of straddle the old school butch generation and the younger trans- and genderqueer-inclusive crowds, and kind of always have. But I don’t see butch disappearing! I do see it changing, revisioning, but I don’t think it’s as gone as is sometimes portrayed. I also think butch flight is a bit of a myth—but I do understand that there is more of a prevalence of previously-identified-as-masculine-of-center-women transitioning to men. (There are at least five people on my Facebook feed going through the early stages of transitioning right now.) I have lots and lots to say about that topic, but that’s all I’ll say for right now. I took some notes and hope to expand my ideas into more essays later. Or maybe a book.

I didn’t finish The Chaos of Stars. It’s kind of that YA fantasy/myth genre that I sometimes devour, but I didn’t get too deep into this one so I put it down after my standard try (of 65 pages, which is 100 minus my age, which is a rule I learned from Seattle librarian extraordinaire Nancy Pearl). The whole thing was full of Egyptian mythologies with a curious modern twist, which I was totally intrigued by but then couldn’t follow very well. If you’re into Egyptian mythologies, perhaps it’d be easier to get into.

I didn’t finish Love in the Time of Global Warming either. I love love love the Weetzie Bat books, and I have read a handful of Francesca Lia Block’s other novels and find them engaging and fun, so I thought she’d be a good one to pick up while I keep flexing my reading chops. I have a hard time with world-building sometimes though, and I didn’t get very deep in to this one. I think the biggest problem was that it became due at the library, but I certainly could’ve renewed it. It just didn’t grip me.

Michelle Tea’s newest novel, Mermaid in Chelsea Creek, however—THAT gripped me. I read it fast, in just a few days, and I got really into it. I love the protagonist, love the girl power, love the pass-out game, love the symbols that thread through it. When I went back out into the world for a run the day after I finished it, I looked at flocks of pigeons very differently. It ends on a cliffhanger, which is a perfect way for the first of a 3-part book series to end, and I can’t wait to read the others.