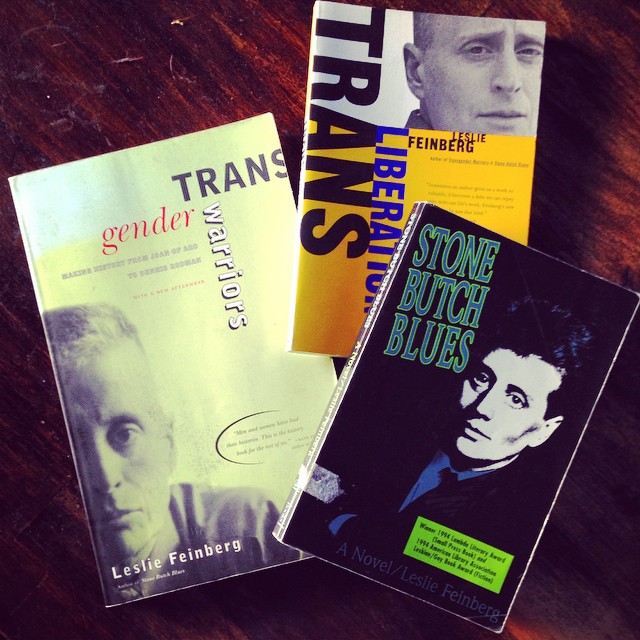 I sit in shock at my desk, though I knew it was coming, knew Leslie Feinberg was sick, and know how deadly lyme disease is.

I sit feeling the shock of grief: Leslie Feinberg died this past weekend.

And today is the Trans Day of Remembrance, and that of itself gets me all weepy about all of those we’ve lost, all the hate, all the fear, and how far we have left to go. It makes me think about “butch flight” and the relationships between butch identity and transmasculine identity. It gets me thinking of my lineage, the legacy I am a part of, and where I came from.

For me, Leslie’s book Stone Butch Blues invented butch identity. If I had the word before the book, it was only as a slur, only as something nobody should want to be. If I had the word before Jess’s story and her tortured restraint of passionate love, it was only used to describe ugly women, unattractive and unwanted. It wasn’t until I read Stone Butch Blues that I realized it described me.

I’m not sure I wanted it to, but I knew that it did. That book made me feel exposed, like someone had found me out. Vulnerable, like someone could come along and pluck my heart from my unguarded chest to do with as they pleased. But also, strangely, it made me feel powerful. I could feel the power that came from being butch, the paradox of growing up a girl and then becoming the suited partner of a beautiful woman, the torture of being such a social outcast, and the deep craving hunger for being accepted.

I wasn’t even 20 when I read it, wasn’t identifying as butch yet myself, though I was starting to realize that was growing in me. I was barely out as queer. I recognized myself so much in that book that I hid it in the back of my bookshelf and didn’t pick it up again for almost ten years.

But it is potent, and it seeped into me. It inescapably linked the words butch and stone, and for years I thought that being stone was the only way to be butch. It still feels like the butch/femme culture overly values stone in butches, that the stone—by which I mean, not receiving sexual touch—is one of the measures of the amount of gender dysphoria felt, and therefore the more stone a butch feels, the more butch they are. There is so much belittling in queer culture about masculine-presenting folks who want to be touched in bed, or—gasp!—are bottoms, and they are so often chided for not being a “real butch.”

I have heard so many butches cite this book as their coming out root, as finally recognizing who they are by reading Jess’s story (Leslie’s story), and so many femmes cite this book as finally feeling like they could be queer and crave a masculine partner, or that it’s the “heartbreaking holy grail of butch perspective.” They have told me they see themselves in Theresa’s butch devotion. For so many of us, Feinberg’s book made our secret budding desires make sense.

“Were it not for Stone Butch Blues, I’d still be stranded on a lonely island of inexplicable gender and sexuality. Many of us would.”— Tara Hardy

Stone Butch Blues came out in 1993, but was set in the 1960s, and I wonder if it wasn’t one of the major seeds which planted 1960s butch/femme nostalgia into our heads while so many of us were coming out in the 1990s. It contributed to how we crave the supposedly thriving butch/femme culture of yore.

I understand being nostalgic for a time that is now romanticized—not only in queer culture but in butch/femme lore and history. Beyond that, it is romanticized in the larger US culture as well, as it is the time post-WWII where this country was thriving, and idealized visions were planted in our collective (un)consciousness. But I also want to remember that while it might seem like butches come from that time, and thrived in that time, what we have now—and the myriad gender identity, expression, and presentation options available to us—is much improved.

“Losing Leslie Feinberg is a gut blow. Hir work has been instrumental in my own life, & the lives of so many queer & trans folks.” — Corey Alexander

Because here’s the thing: There are a lot of problems with those idealized versions of butch/femme relationships. A lot of problems. Beyond the linking of stoneness with butchness, there is an overvaluing of queer masculinity and undervaluing of femininity. This isn’t just in Stone Butch Blues, though it is there—it is all over mainstream culture, and we queers haven’t escaped it: it has permeated queer culture to the core. It has at times felt present even in the articles I’ve read about Leslie Feinberg’s death, where her partner, poet Minnie Bruce Pratt, has often been skipped over. The scholars I know who are studying femmes have a hard time locating them in queer archives, and have often best identified them by looking for their more visible butch partners. This is not good. This is a version of butch that puts femmes as an accessory, as a tool to validate and enhance butch masculinity.

I adore the butch/femme culture. As someone who highly identifies as a femme-oriented butch who is currently dating a trans boy, I adore it even more, and as I have a bit more distance now that I’m a little bit outside of it, I see copious places where the butch/femme culture reinforces the cultural binary gender roles, where it pigeonholes people into boxes of expectation, where people are shaved down to fit labels and not the other way around.

Stone Butch Blues may have invented butch identity for the current queer cultural movements, but we need a reinvention.

We need the new butch.

We need a butch identity where the masculine gender role is criticized and reinvented to include access to all aspects of emotionality, psychology, caretaking, feeling, hobbies, interests, and play.

We need a butch identity where any kind of surgery and hormone taking and body modification is acceptable, supported, and celebrated without commentary on how we knew that butch was “trans all along” or that they are “betraying their womanhood” or teased, “another one bites the dust.”

We need new butch clothes, despite Saint Harridan and Tomboy Tailors and all the other dozen (more?) creators of clothes for dapper queers that have popped up in the last few years, not because we don’t look good in those (damn, we do) but because most of those are suit-and-tie shops, and there are so many more ways to be butch than with a suit-and-tie. Let’s reinvent dapper fashion, let’s never be limited by the narrow masculine options that have existed so far, let’s go farther, let’s have it all.

Even as attached as I am to the word “butch,” we probably need new words. Language evolves as we do. We may even end up turning butch over for some new way to talk about the in-between space we occupy, that tortured passionate place of wanting, that marginalized place of vision and truth.

I wish we had our own words to describe ourselves to connect us. I don’t want another label. I just wish we had words so pretty we’d go out of our way to say them out loud.” —Jess, p254 in Stone Butch Blues
As much as I would like butch to thrive and live forever, and as invested as I am in this identity, it has roots in dangerous masculine and white culture. I see so much fear that butches are “a dying breed” or that butch/femme culture is dying. I still think it isn’t—Long live the butch!—but if it is, perhaps it is at least a tiny bit in part because we are in a queer culture now that is working to decenter masculinity and whiteness. Perhaps when we fear we are losing butches or losing butch/femme, we are really losing the cultural way we have privileged masculinity and butchness. Perhaps along with this reinvention, we are losing the huge amount of body shame we are forced to carry as butches. Perhaps we are losing the social ostracization that came with butch masculinity and femme femininity.

Perhaps we are moving toward something new, and even better.

10 thoughts on “Long Live the Butch”