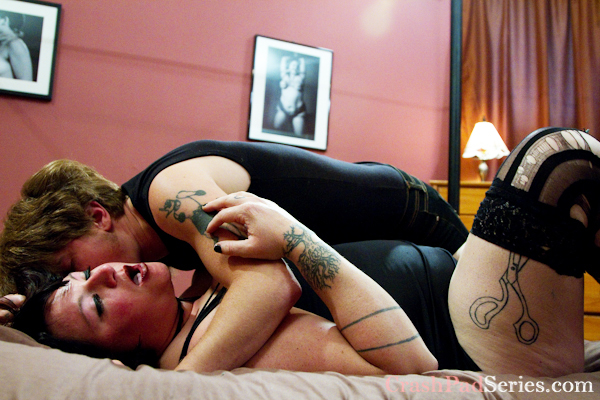 Wait for me after class?

Jesse’s heart pounds. That’s all the note says, but she knows it’s from Asher. Asher, who is deliberately not paying any attention to Jesse, even though Jesse positioned herself on the end of the second row in the lecture hall, on the side closest to where Asher usually passes around the handouts. Asher, whose dress is just a little shorter than is probably appropriate for college, especially for a Teaching Assistant, but whose tight grey pencil-skirt dress, long dark hair pulled up in a bun, red lipstick, and cat-eye glasses are fueling a variety of teacher-student fantasies in the room right now. Asher, who has been biting the insides of her lips thinking about Jesse’s hands, the smoothness of the palms, the skin on her fingers kind of rough, the way they’ll feel in her mouth.

Trying not to squirm, Jesse tries to slide the note into her skinny jeans with nonchalance.

No big deal. I’ll just wait. For Asher. After class.

She tries to focus on the psychology handout that Asher dropped on her desk with the note. Her fingernails were painted a soft shade of pink, the same as the accents on the grey dress. Asher didn’t look at her. The note was a stealth move. Ash’s handwriting is tight and fine cursive—the t and the f are loopy but compact. Her fingers are deft and precise, dropping the note with the handout and moving on to the next desk without another glance.

Jesse barely hears the rest of Ms. Bell’s lecture. She watches the slides and takes notes, but all she can think about is Asher. Asher’s lips when they kissed yesterday. The way she tasted like oranges and cream. Probably that was her lip gloss, otherwise how would her lips have been shimmering? Asher’s hair spread out in the grass under the cherry blossom trees in the quad. How Asher kept smiling and laughing at Jesse’s stupid jokes.

All the students start rustling their books and notebooks and backpacks when the clock gets around to 1:20pm, and Ms. Bell raises her voice over the noise to remind them to read chapter 6 by Thursday. Jesse delays packing up her things—the thick hardback course textbook, her blue spiral notebook with PSYCH 201 written in big sharpie letters on the cover, her Slingshot day planner, a pack of Post-Its of various sizes and colors to use to make notes in the textbook, and her pencil case, which actually only has one pencil in it, for when the professors insist on marking up a text. She slides them one at a time, deliberately, into the brown canvas shoulder bag, shifting around the granola bars (which had fallen to the bottom) so they wouldn’t get smashed. She leaves a pen in the groove on the desk, one of her non-important ones, a blue Bic with a chewed up end.

Asher’s note, she tucks into her Slingshot, where all the important things go.

Jesse goes into the girl’s bathroom across the hall and waits with a few of the other Psych 201 students. They are prattling on about lacrosse and don’t stop talking to each other even when they go into the stalls. Jesse pulls the strap on her bag tight, hangs it on the back of the door when it’s her turn, washes her hands, dries them on her jeans, and goes back out into the hall. A few classmates are left at the end of the hall, but mostly they’re clearing out. Jesse peeks in the door of the classroom. Asher and the other two TAs, including Bryan, who is the TA of Jesse’s section C, are still in there talking to Ms. Bell and gathering the paperwork. The last two students leave the room. Jesse takes a deep breath, and walks in.

“Forgot my pen,” mumbles Jesse when Ms. Bell turns to look at who has entered. Bryan is saying something about grading tests. Jesse returns to the desk she was sitting in and looks around, setting her bag in the chair next to her. She doesn’t look at Asher. She pulls up her jeans and crouches down to look more carefully on the floor.

“I like a girl on her knees,” Asher says suddenly, loudly. Jesse nearly falls over. She stands, and Asher has the blue Bic in her hand, standing right next to the desk. The rest of the room is empty. Jesse is sweating and blushing and maybe has to pee all at once.

Asher laughs. “I’m going to get a snack at By George. Come with.”

“Okay. I, uh, I’d like that.” Jesse stands and shoulders her bag. Asher hands her the pen, leaving her fingers on it so they touch Jesse’s when she reaches out to take it, and leans in to touch her lips to Jesse’s cheek. Jesse puts her sweaty palm on the desk to keep her knees from giving out.

Asher doesn’t carry a bag, just the plain file folder stuffed with paper and the course’s textbook in a pile. She’s tucked a pen and a pencil into the bun on the back of her head. She has a purse slung around one shoulder, but it probably holds little more than a paperback book.

“I’m glad you waited,” Asher knocks Jesse with her hip when they get out of the grassy quad and to the slick bricks of red square. It was raining this morning and the ground still isn’t dry.

“I’m glad you asked me to,” Jesse knocks Asher back. She had the urge to wrap her arms around Asher and kiss her, hard; to push her against the side of the building and hold her arms above her head.

Asher talks a little on the short walk to the cafe; Jesse mostly listens, swallowing down a few words here and there, unsure if they sounded smart enough. Jesse picks out a Sprite when they go through the cafe line, and Asher gets a paper basket of french fries and a root beer. They find a table over by the window, away from the groups of students who have pushed tables together, being rowdy.

Asher puts her tan tray down on the table and before she’s even sat down, she says, “I have to tell you something.”

Jesse’s knee is folded under her on the chair and she’s lowering herself down to sit, but she slows, looking up at Asher, still standing. “Okay?”

“I just …” Asher sucks in a breath, and sits down, then fingers two fries and pops them in her mouth, chewing. Jesse tentatively reaches into her bag for the peanut butter granola bar, still watching Asher, who is staring out the window. Asher fingers the straw in her root beer, taking a few sips, leaving a ring of red lipstick on the straw.

“I like you,” Asher starts, leaving the last word hanging.

Jesse thinks that isn’t the thing she’s trying to say, and waits for Asher to finish. She realizes she’s holding her breath. After a few too many moments of silence, Jesse says quietly, “I like you, too.”

With a quick glance at Jesse, Asher hurries on like she was interrupted. “But I want you to know. I am … I’m pretty kinky. I just have to—. Tell you.”

Jesse gulps. Kinky? Oh. That’s what she was trying to say? … Isn’t everybody kind of kinky?

Asher keeps staring at her fries. “My last girlfriend, we didn’t work out because I wanted things that she, she didn’t. I don’t really want that to happen again,” she says quietly, the pain of that loss still evident. Who knows how long ago that was, or how long they were together. Years? Were they married? What did Asher want to do that the ex didn’t? Could Jesse be that for Asher?

But that’s it. Asher lets out the breath she’s been holding and munches a few more fries. Jesse ponders what Asher has revealed. “That doesn’t … that doesn’t bother me. I mean, okay. I like some of that stuff too, I think. I haven’t … I don’t really know what to do, all the time, but I like to try things.”

Asher gazes a little sideways at Jesse across the table. “Are you … I’m not sure you could handle it. Me.”

Something about how Asher said it made Jesse think she was sad about that, or vulnerable. Like she wanted someone to handle it. Her. And that little glimpse of softness gave Jesse a thrill. She leaned forward just a little, whispered, “Maybe you should try me before you decide,” and snapped open her can of Sprite, which fizzed in response.

Jesse took a swig and Asher’s face relaxed, breathing out hard like a half-laugh and smiling. She regarded Jesse again, in that way of hers that made Jesse feel like Ash’s hazel-gold eyes had x-ray vision. “Alright,” she says, considering. “Maybe I should.”