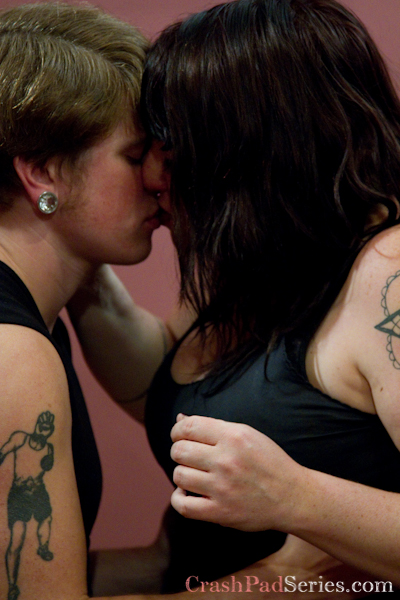 Jesse plunges three fingers into Asher’s cunt, splitting her open, pushing hard past any resistance. Asher is on the tips of her toes, back arched, ass out, legs long, hands and arms and cheek and even the tops of her breasts thrust against the glass of the floor-to-ceiling hotel window. She cries out. She drools and it slides down the glass, leaving a wet trail. Downtown Seattle’s skyline and Puget Sound are glittering beyond the glass, the night as clear as a realism painting, and just as romantically blurred around the edges with the damp ocean air salting the city’s lines.

“Oh fuck, oh my god …” Asher can’t much speak. She babbles words and mostly sounds, guttural and low, come from her throat. She is being taken apart from the inside out.

Jesse is sweating and so sweet on Asher she can barely stand it. Even Asher’s skin is sweet: she leans in for another nibble at Asher’s shoulders, and Asher gasps and leans back into her in response. Jesse reaches around her to twist and pull on her dark brown nipples, so hard and stiff after being pressed up against the cool glass.

The hotel is sleek, modern. Mostly grey, some black and white highlights dot the room. One whole wall is windows. It was a gift, this hotel weekend where they have been holed up, giggling on the pillows and fucking leisurely, with nowhere to be and nothing to do, for Asher’s Master’s graduation and her final completion of her practicum hours. Now that the summer is over, she’s even got an entry-level position at a clinic on Capital Hill. Jesse starts her senior year of college in a few days.

But for now, there is only each other, luscious and wild, so eager for the other and so hungry for more.

Now that Jesse has opened up this dominant thing, it is blooming in her like the Arboretum after the first stripe of sun growth in March: colorful and vibrant, and made to be there.

When they first settled into the hotel, Jesse tied Asher to the bed and blindfolded her, then left her, spread eagle, while Jesse put away their clothes and unpacked the bag of groceries they’d brought. She planned on spoiling Asher every minute of these three celebratory days and two nights. Asher kept talking, guessing, asking Jesse questions, but Jesse only answered simply: “Mhm,” or “Yes, I think so,” or “If you ask for it, honey, you can have whatever you want.”

When Jesse finally felt situated, she strapped on and slid inside Asher slow, fucking her gently and sweet, bodies rocking together, as Asher sucked Jesse’s fingers into her mouth and Jesse touched her clit, in that soft-fast way she’d learned Asher liked, until she came.

Jesse had big plans for the scenes in this room for the weekend. And what would they do with those amazing windows? A vision started coming to Jesse as she worked out her third orgasm since the elevator.

When it was time, Jesse waited until Asher asked for it. It didn’t matter how—she just had to form the words. It was what Asher most wanted, most of the time: To be confronted with her own desire and made to look at it directly, befriend it, to stop pretending like it was someone else’s want that was driving the scene. It wasn’t that Jesse was overpowered by lust and just had to take her, right there right now, though that was fun too—it was Asher’s craving for being torn up, filled up, degraded, humiliated, and used that was the impetus for most of their play. Jesse loved seeing her so filled to overspilling with her own lust that she would draw courage from some unknown well and finally start bubbling with request after request. Maybe it’s why Jesse used so much bondage—to keep Asher still and seeping in it when she finally spilled open. Being tied up is restrictive, sure, but it can also be profoundly meditative, and take someone into a safe holding where more things are possible.

She had also discovered that one of Asher’s most favorite things is for Jesse to get off. Maybe it’s that fetish for being used, but Jesse to lower her own cunt down over Asher’s mouth, to fuck her, to jerk off over her chest or face or even right next to her cunt, and to have some spectacular orgasm, yelling and moaning, and then to leave Asher there, panting and waiting—that, that was what got Asher writhing and squirming, begging to be used again.

So it was with great mutual pleasure that Jesse wracked up orgasms like points in a pinball game during their hotel weekend. She kept track, telling Asher aloud how many times it had been.

In Asher’s ear at the hotel window, Jesse whispers, “Seven, Asher. I’m all the way up at seven, and how many times have you come?”

Asher whimpers. Her clit is hard and swollen, her lips puffy and thick. Her mouth is red from sucking.

“That’s right, once. And you weren’t really supposed to be coming, were you? You just couldn’t help it?”

“I couldn’t help it! You made me do it, I-I’m sorry, I didn’t mean to. I like following your rules, I just, it was too much. I couldn’t help it!” She thrums the words in that husky low tone she gets when she is so turned on.

“Shh, it’s okay baby. I know. It was my fault, I don’t expect to fuck you that much and not have you come … at least sometimes,” Jesse laughs a little to herself, thrilled and giddy. She strokes Asher’s cunt, every contour, every swollen slick place. She gets juicy enough as it is, but Jesse still adds more lube, more wetness. She traces lines with the pads of her fingers and uses her fingers to pinch and apply pressure, catching the head of Asher’s clit between her fingers, palming her whole vulva, pinching her lips together, which makes Asher squirm and shiver.

Jesse slides her fingers in again, in and out, stopping in all the spots that she knows Asher likes. “How many times are you going to come for me now, if I let you?”

“How many … times? Two. Three. Five. How many do you want me to come?” Asher’s words aren’t quite making sense, but she thrusts her hips back toward Jesse and presses her chest and cheek into the glass, offering herself up, willing Jesse not to stop.

“Five, huh? That’s a lot. Could you come on demand, if I just tell you to come right now, could you do it?”

“Could I come … right now? I don’t … really know,” Asher puzzles a little, gets distracted by Jesse’s fingers, then starts thinking again, trying to figure out how much her mind has control over her body. “Maybe? I think so. Yeah, actually. Tell me to do it! Jesse, tell me, and I’ll do it, I’ll do it for you, whenever you say.”

“Really? You think you could?” Still, in and out, slowly, with Jesse’s thumb circling Asher’s clit.

“Ohhhhhh,” Asher cries out, pulses her cunt hard, pushing and contracting and pushing until she gushes onto Jesse’s hand.

“You’re so fucking hot, Ash. I love watching you like this. Come again girl, do it, let’s have it all. Now!”

“Fuck, fuckfuckfuck!” Asher yells, arms sliding down the glass as if she can’t hold them up any longer. Her knees and thighs shake. Jesse pushes her hand farther inside and Asher gasps, pushing her hips open.

“Two,” Jesse growls in her ear. “Keep going. Ready to do it again for me, slut? Didn’t get all you needed yet, huh? Can you do it again?”

“Three,” Jesse is practically giggling now, high and strong and she could do this for hours: keep Asher poised on her fingers, begging and coming.

“Four! Please four, Jesse please, four—” Asher begs. She squirms and tries to close her legs, trying to back off from the orgasms that still want to claim her cunt.

“Now. Do it,” comes Jesse’s reply, low and growly at Asher’s neck. Jesse bites at her earlobe and Asher throws her head back to rest on Jesse’s shoulder, sighing, breathing, still moaning those sounds from her throat.

“One more,” Jesse reminds her. “One more, and then we’re all done. Can you do it again?”

“You can do it. Remember how you told me five? Actually, you said, ‘How many do you want me to come,” but I want five. So five it is. That’s one more,” Jesse makes the gentlest circles over Asher’s swollen cunt, soft and fast on her clit, that way that she likes.

“I can’t, I can’t Jesse … oh god, oh my god, oh my fuck fuuuuck …” Asher trails off and comes again, legs shaking, body humming, throat humming, practically sliding all the way down the window to the floor if it wasn’t for Jesse’s leg in between hers. Jesse holds her up for a moment, then lets them both collapse down, catching Asher in her arms and wrapping around her naked body as she shivers and settles.

“I can’t believe you made me! You. You! Are incredible. I love you,” Asher nuzzles into Jesse’s shoulder and Jesse braces herself against the bed to hold them both upright. They laugh and talk and stroke each other, doing that post-fucking haze-y loopy thing where everything is hilarious and important.

Asher lights up. “I’m starved. I feel like I have never eaten before ever. I want all the things!”

Jesse starts untangling, and moves to stand. “Oh that’s good, because we bought all the things at the grocery store before we came. I’m hungry too. C’mon, let’s get up. You okay to stand?”

“Yeah. Okay.” Asher reaches up for Jesse’s arms and accepts help to get steady on her feet.