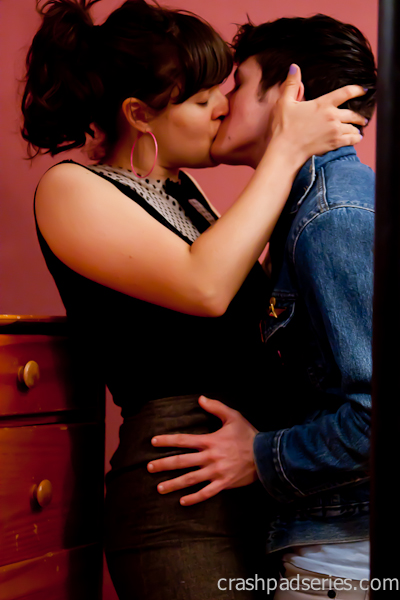 Elise is so over these regular play parties. She sits in the corner drinking sparkling water through a straw—no need to muss her lipstick over a drink—and surveys the dungeon. There are a handfull of young kinklings, giddy and drunk on flesh and feasts and possibility; a smattering of couples who haven’t left each others sides, their slightly widened eyes giving away their nervousness under their I’m-cool-I-got-this external demeanor; and a handful of former (and perhaps future) of her own play partners. She starts to regret that she ever let Hannah talk her in to coming. Hannah is right—of course, she always is—that it’s been too long since Elise played, but Elise just isn’t sure if what she wants is out there—or maybe more accurately, how to find it. She is starting to feel old at 35, as if everyone has found someone by now, so nobody’s left to find. Except, of course, her.

Tucked into the corner Hannah is up on the high bootblack chair, wearing her favorite blood red Agent Provocateur matching lingerie set and her stiletto thigh-high leather boots. A bootblack is buzzing around her feet, soaping the leathers, expertly massaging Shay’s feet and calves while cleaning the leather. Elise heads over to tell Hannah goodbye and hit the road. It isn’t even midnight yet, but she’s done.

The bootblack and Hannah both flick their attention over to Elise. The bootblack pauses, just for a moment, blinking, as if he is caught off guard, then quickly re-focuses on Hannah’s boots.

“What? No, you can’t go yet! They haven’t even done the demo,” Hannah protests. That means, it isn’t even midnight. “Stay until then, at least. Barely anyone is here yet. You never know … ” Hannah flashes that seductive smile full of unspoken promises, and Elise gives in immediately, rationalizing it in her head. Well, someone new could show up. The demo could be really hot.

“Hannah, may I lick your boots, please?” The bootblack boy pauses his work again and waits, without expectation, for Hannah s permission. The boots are sparkling clean, oil and some high-quality polish lined up and waiting obediently on the tray for the next step. The boy stands still, focusing, not nervously fumbling but calm and collected. Even at the feet of one of the most powerful dommes in the room.

“You may,” Hannah answers. Though her tone was clear, Elise could hear underneath it that Hannah was a little bored, too. There really isn’t much notable going on tonight.

Elise’s attention drifts to the bootblack, watching as he takes his time getting into just the right position before he gently places his tongue on her finest leather. His tongue is long, thick. Like it barely fits in his closed mouth. He licks in smooth, elegant strokes, almost deicate, though the boy himself is not. He looks like he could be thrown into walls, wrestled to the ground, torn open until he bled, and he’d only say thank you and beg for more.

He licks one boot: the seam of the leather on her insole, and the line starting at her pinky toe; the textured design of abstract flowers that snakes up her calf; and even the seam at the top of the boot, past her knee, well on to her thigh. Hannah sighs, and Elise can see her hips relax and her legs fall open just a little more.

The boy kisses back down her knee and calf, and begins to lick the other boot.

Elise realizes she is staring. Almost drooling. Fuck, why hadn’t she worn her best boots? Hannah didn’t come with him, she picked him up here, so he’s probably unattached and doing anyone’s leather. How hadn’t she noticed him before? Damn he’s cute: quite a few inches shorter than Elise, probably almost the same height if she took off her towering 4″ heels. Light brown hair, light skin, fine fingers and small hands. He had a thin wisp of facial hair, the kind on teenage boys before they can grow the real thing. Elise hopes he isn’t as young as he looks.

“A little longer,” Elise tells Shay. “I’ll stay for the demo.” She heads back over to the perch on the other side of the room and tries not to keep watching Shay and the bootblack, but mostly fails. He is deft, supple, and Elise craves to be in that chair. Her hands start pulsing in her lap, twitching with ache and desire.

The demo starts at twenty after midnight, because kinksters are never on time. Elise loses sight of the boy by then. Probably off playing with somebody else, probably he’s the one making the grunting yelps from the back room, probably he’s already left the party and Elise won’t see him again. A butch daddy-type and thick-thighed curvy gorgeous femme demonstrate a rough blow job for the whooping crowd, the butch standing up high on the bench, the femme kneeling on it, her lipstick wrecked and drool down the front of her bright thrift-store vintage dress. Elise watches half-heartedly, giving up on the party for the second time. That’s what everybody really wants, right? Some sweet, submissive femme—not the towering domme Elise presented. No wonder she had no dates. Play was easy enough—usually—but that wasn’t really what Elise was looking for. She wanted romance, courtship, love, a partner. A wedding, even. And also a servant, a submissive, a boy who would do his proper worship, and obey all her orders to the best of his ability. Even more so than play, she wanted companionship, wanted someone to walk through life with. She’d played with poly and open relationships, and that’s a possibility, but it isn’t necessarily her preference. She is too possessive for that, she wants to go too deep and too all-out with ownership and vulnerability.

It is a hard thing to date when one’s needs are so specific, especially in a community that usually values different sorts of pairings.

Elise turns to make her way through the crowd and head to the coat check.

“Hey, you’re not leaving, are you?” A voice cuts through the noisy dungeon from someone close to her ear. It’s not Hannah s voice, who else—? She turns, coming face to face with the bootblack boy, the crowd so thick that they are almost touching.

“Yes, I think it’s about time,” she replies, smiling. Unless …

“I’m Morgan,” he offers his hand to shake. She takes it, palm to palm, his hand warm and smaller than hers, nesting nicely into her grip. She doesn’t let go.

He nods, not meeting her eyes, shyly looking down. “I saw you watching me.” Elise flushes a little—was she so obvious? She usually keeps her hand much closer to her chest. But there is something about this kid, something intriguing and so very hot.

“I was,” she says. “You made quite an impression. I liked how you treated Hannah’s boots.”

He nods slowly. “I liked it too. I love to be useful.” He shifts a little, foot to foot. Someone knocks into Elise from the back and she almost falls into Morgan, but catches herself.

“Well, I don’t want to keep you. I just wanted to make sure to introduce myself. I hope I run into you again,” Morgan says.

“I’m not sure I believe in fate,” she says, taking one of her trick cards out of her tiny pocketbook.

“Oh, I do,” says Morgan. “Absolutely.” He smiles and almost looks directly at her, for just a blink,, and Elise sees his eyes sparkle.

“You do, huh,” Elise flicks her arm back and holds the card close, tapping it against her cheek, considering some options. “Then I guess your fate is to call me tomorrow.” She hands him the card, keeping ahold of it, their fingers almost touching. “Not too early, I sleep in on Saturdays,” she adds, setting up a challenge: What would “too early” be to her? 9am? 11am? She lets go of the card.

He swallows, pulling it up to his face to read it in the dim dungeon. Mistress Elise Winter, it reads, with her email address and phone number in embossed blue text on a cream background.

She leans in close to his ear. “Ma’am will do just fine, Morgan. Thank you for introducing yourself. Goodnight.” Husky, low, sweet. She felt his knees tremble, saw the rumble through his body.

She kisses his cheek, and disappears into the crowd.