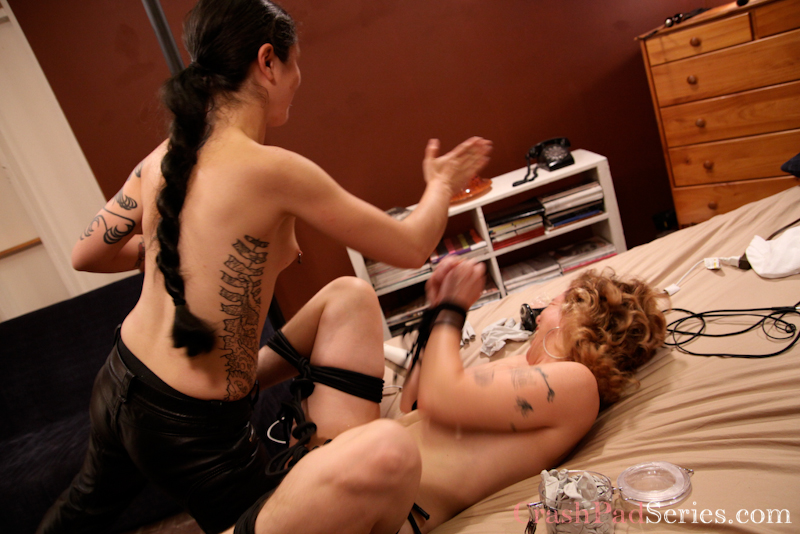 Bean fists Mickey’s hair, yanking hard, holding her motionless, before she throws her down onto the bed.

Bean isn’t worried about what she wants. She is ready to take. Eager to trust her girl, eager to believe that Mickey can stop her or safeword or use her skillful negotiation to shift things if she really needs to. But Bean also knows that Mickey gets off on being used, abused, like property, like an object. She loves being a receptacle for that kind of pure, strong desire that Bean can dish out.

Every smooth surface she can find, Bean slaps. Ass, thigh, cunt. Throws her body around on the bed, just for a show of force, just so she can get used to being off-guard and off-kilter. Bean holds her down, bites into her shoulder, too hard too fast but Mickey likes it, she screams out, but she likes it. Her cunt is wet, wetter still. She’s along for the ride. She lets herself go, she turns herself over to Bean like a plaything.

Bean pulls her hair. Moves her closer to the edge of the bed.

That’s when Mickey starts to struggle. She bites Bean’s arm when she reaches. She wrestles against Bean’s weight, even though she has no chance. She’s fast, though—wily, and quick, and strong. She twists out of Bean’s grip and forces Bean to catch her again, to grab her harder, hard enough to leave fingerprint-sized bruises on her arms. She scratches. Bean pins her against the wall but Mickey ducks out of her arms, so Bean takes her down, hard, to the floor, knees hips wrist, but everyone is okay and so Mickey is pinned again. Bean takes hold of Mickey’s hair and drags her up to the bed.

Mickey smirks. As if getting to bed like this is her idea. As if it’s what she wants.

Bean smacks her in the mouth, wipes that smug look off her face. Bean has her attention now.

Mickey looks up, eyes and mouth wide, feeling a little wounded, a little shocked. She relents. It’s that moment Bean waits for, lives for. When Mickey gives up, gives in, gives herself over.

Bean leans over and growls in Mickey’s ear: “That’s right. I can fuck you any way I want, whenever I want. I can do anything to you. Because you’re mine, aren’t you. And you like it rough, don’t you, you dirty girl. You are such a bad girl. I’m going to have to teach you a lesson. You’re going to get it now.”

Bean puts her in her place.

Mickey stays there, and whimpers, and pleads, and begs, and opens her legs wide to her lover.