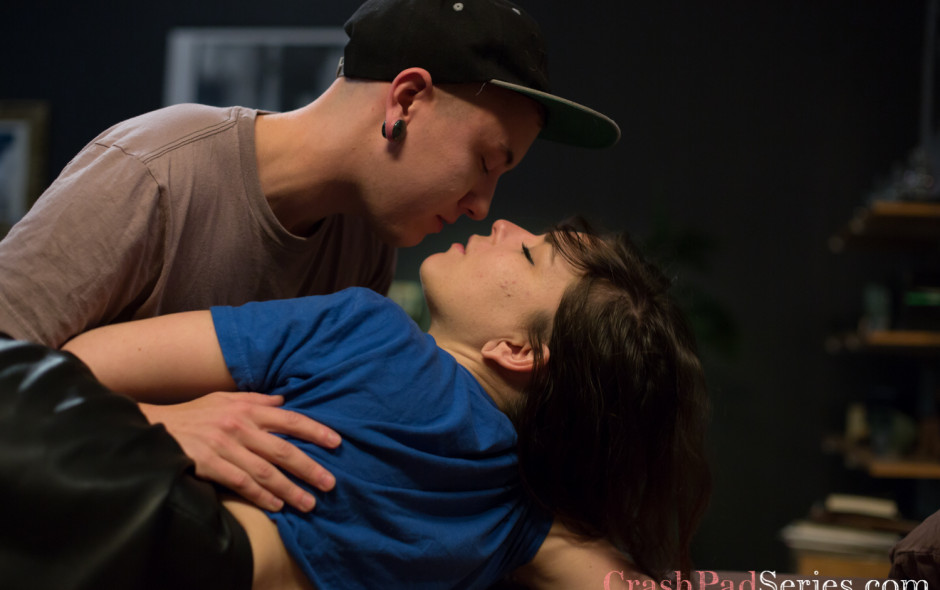 Beck waits for Lauren outside of Chez Panisse in Berkeley, leaning up against the brick wall, posing herself deliberately while trying to look casual. One foot back on the wall, knee bent; leaning on one shoulder, hand in the pocket; crouching down with her back resting against the wall—none of them felt quite right. Beck fiddles with a Bic pen, the back of which is nearly destroyed from chewing on it. At least it isn’t a cigarette. Lauren hates it when Beck smokes.

Fancy rich Berkeley people mill about, waiting for their reservation to be called. The night air is warm, the breeze still a little cool; it hasn’t rained in weeks and everything is dry and dusty. Everything is well taken care of on this block, but just one block in any direction and things get a lot more brown and crisp.

When Lauren emerges, she is long and limber and worked up from her shift, talking a mile a minute, kissing Beck so quickly she misses Beck’s skin and only touches air. Beck always picks up Lauren on Thursday nights, since she works from home on Friday. It’s become their date night, an unspoken agreement that they’ll spend the night together. They have a lot of unspoken agreements.

“The duck tonight was outta control,” Lauren is saying as Beck opens the door of her green VW Jetta and Lauren steps in. Her bare legs rub up against each other for a moment as she’s shifting and pulling her long legs in to the car, and Beck’s mouth waters. Lauren is wearing the black ballet flats with the little white bows, and Beck loves how she always kicks them off the second she gets home—”Who needs shoes? Shoes are for people who don’t like their feet to touch the ground. Me, I’m a realist.”

Beck is nodding, listening, interjecting little murmurs of interest as she drives through Berkeley up to her house in the Oakland hills, a modest little thing financed the first year she landed that exec position at Yelp. Beck lives alone. Beck likes to live alone. Lauren’s apartment in Berkeley is cramped but sweet, and they almost never stay there. Beck is pretty sure Lauren’s roommate Ricky hates her.

“And she didn’t even listen to me!” Lauren is saying. “It could have all been avoided if she’d just paid attention when I told her the plan for the evening.” She’s talking about the other host at Chez Panisse, a hetero woman, Christy, who just discovered Burning Man and won’t stop talking about it. Beck and Lauren went out to dinner with Christy and her “partner” Ben once, but spent the entire evening criticizing the food and never said one thing that was interesting. It was a good choice of restaurant though, Beck had to give them that—but she won’t put herself in that situation again, even though Christy has queried.

Lauren always needs half an hour to talk through what happened at work after her shift is over. Beck takes the long way, winding up Snake Road and up Skyline Boulevard, enjoying the view of the sparkling lights of San Francisco, Treasure Island, the Oakland shipyard, and the Bay Bridge.

Suddenly, Lauren says, “Pull over,” right into Beck’s ear. Her hands are on Beck’s thigh in that provocative way that tells Beck that she is about to dig into her jeans and she damn well better be wearing a cock. Lauren’s skirt is short and tight and her legs are tanned, her thighs thick. Beck licks her lips and eyes her girl as they slow to a pull-out overlooking the Bay. Beck hasn’t gotten a word in, doesn’t even know how to say what she needs to say. She’s been waiting to pick up Lauren ever since she left work at 5 o’clock, and the combination of lust and trust is making her hands ache to pull Lauren close and inhale her lavender shampoo smell. But talking can wait.

Lauren lunges at Beck’s fly before Beck even has the chance to put her car in park, pulling out Beck’s packing cock and taking it into her mouth. Lauren’s curls tumble out over Beck’s lap and Beck holds them back so she can see Lauren’s pretty lips. Her kisses are full-lipped and luxurious, soft and supple. Beck can’t feel anything through her cock, and she thinks it’s stupid when dykes pretend that they can, but she loves how Lauren looks when she wraps her lips around it and licks with her tongue. Beck comes pretty easily anyway, so a little extra distance between her premature orgasms is always nice.

Beck runs her hand down along Lauren’s back, over her ribs and the sides of her body, over her hips, pushing her hand between Lauren’s legs to reach her cunt. This is what Lauren likes: being fingered until she comes while Beck’s cock is in her mouth. This is what Beck likes: the weight of Lauren on her lap, the feel of her curls when Beck fists them, the feeling of her palm disappearing inside Lauren’s cunt, and fucking Lauren’s ass bent over the bed when they get back home. Plus, whatever gourmet midnight snack Lauren makes is always the perfect blend of sweet and umami. The curling up together and sleeping is the hardest part, but Beck is getting used to it, letting her messy self be seen.

It isn’t going to take long. Lauren’s hips are rocking already and she’s working her hand up and down on Beck’s cock. Beck could come at any moment. She feels numb. Her thighs are squeezing together and Lauren’s cunt is squeezing at the same pulse, her fingers caught inside and shaking. Something is happening, but Beck isn’t sure what, it doesn’t usually feel like this. This feels hard, dangerous, like she’s going to cry out and pee and come all at once, and something is going to happen, it’s going to make something happen, like her body is going to come apart at the seams and slowly disintegrate.

Against her palms, Lauren’s thighs are quivering. Beck wants her mouth on them, wants her mouth on Lauren’s cunt, wants to drink her down and make her come over and over, sucking her clit so swollen. The thought of it sends Beck’s own cunt contracting and coming, and she pushes her hips up against Lauren harder, her clit spasming in sharp jolts of electricity as she bites her lip, hard, harder than she means to. Her body bursts and vibrates, the numbness seeping away and leaving more spasms of pain, release, confusion. Why does it have to feel like this. Beck wants to ignore it, push it down, but she can’t, it bubbles up, and pretty soon she’s crying—tears leaking from her eyes, gulping for air, the messy gross crying that Beck would never let herself do in front of anyone else.

Lauren is in her lap before Beck even notices it, curled up between Beck’s body and the steering wheel, and the weight of Lauren feels comforting. Lauren is kissing her face, nuzzling into her neck. Beck can’t form words yet. Lauren knows better than to ask, or to demand, explanation. She just sits still, she just holds.

“My mom called earlier,” Beck breathes out, not even sure she can say the words. She can hear her mother’s voice again, so clear, ringing like a bell: “Rebecca, Mallory died last night.” They had been waiting for it, of course; it was inevitable, the doctors had said. It had been looming. She’d hung on longer than anyone expected. Beck had already traveled out to Connecticut twice to say goodbye.

Lauren is looking at Beck expectingly, her expression softening as she sees how much struggle is in Beck’s eyes. Beck takes another breath, and manages to say, “It’s Mallory. She’s gone.”

“Oh,” Lauren gasps. Her fingers lace through Beck’s, and she lays her head on Beck’s chest. Beck lowers her face to kiss the top of Laurens head, and inhales the scent of her lavender shampoo.

4 thoughts on “The Night Everything Changed (Lauren & Beck #1)”