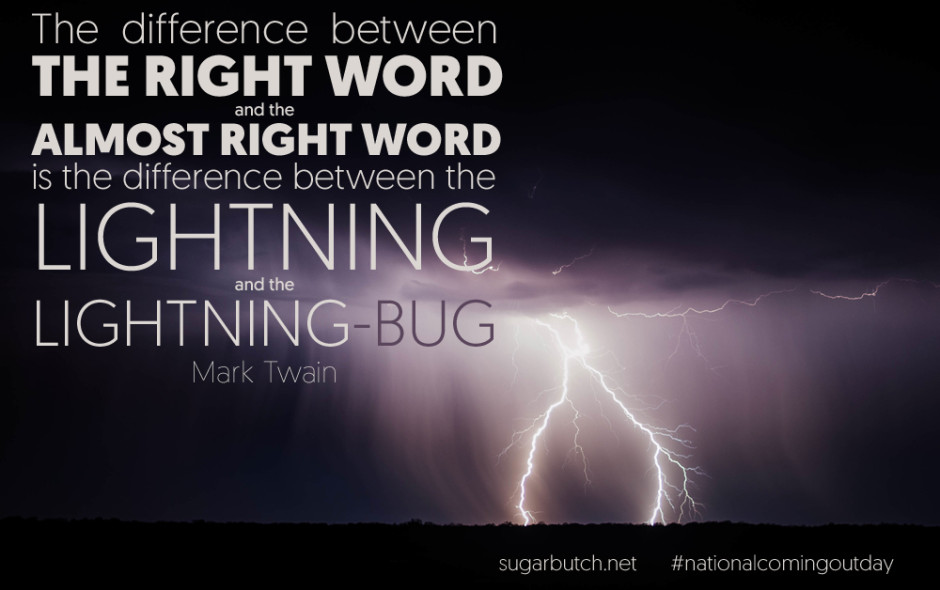 For #nationalcomingoutday, here are some words I use to describe myself and some identities that I have actively cultivated:

For a while, I kept a list of words in the back of my journal, making a note to myself anytime I heard myself say, “I’m a _____.” I would write it down and think about it, pondering if I really am that thing or if it was a passing moment of identifying as such. Some of the words that came out of that are survivor, introvert, and hedonist, as well as the more often-used social justice ones, like butch and queer and dyke and gendequeer.

There are some other words—like lesbian, dyke, and trans—that are almost the right word, and which I sometimes use and sometimes identify with, but that aren’t always precisely right.

There are a few more that are complex and I hesitate to list, like yogi and tantrika, because while I do practice yoga and tantra, I haven’t quite been able to reconcile the cultural appropriation that surrounds me with those activities enough to be comfortable to use the identity labels to refer to myself. (So for now, I go with 2nd generation woo.)

There are a few more that I aspire to, but don’t quite have yet … like gardener and runner, which are identities in progress but not quite integrated. I do have a garden (finally!!), but I frequently forget about it. And I did run two 5k races in the past two years (hurrah!) but again, that habit doesn’t feel consistent, and isn’t quite an identity yet, just an occasional burst of interest.

And what’s the word for someone who tends to be depressed, or who struggles with depression? I don’t quite want to say neurodivergent or depressive, those seem too intense. Something a little more mild that says that I tend toward internalizing emotions rather than externalizing, and tend toward feeling down rather than feeling up (anxious). Or maybe this is a case where I have to reclaim a word, or use something that seems overly harsh and is misunderstood (like depressive).

There’s a lot to think about on National Coming Out Day … I’m particularly interested in identities, and what we call ourselves, and how we claim our power in these words and communities, but I also recognize that for many people, being associated with the identities that have marginalized them feels an awful lot like being marginalized all over again.

I believe that we should find the precise right words that are big enough to contain all the multitudes of us, and not sacrifice our selves to fit into labels which constrict. I believe the identity should conform to us, that we shouldn’t conform to it. And I believe that labels and identities and words that describe ourselves should always be the starting place, not the ending place, of the conversation—a place of opportunity to know more and ask questions and listen, not a place to fill in our own assumptions and determine the truths of others.

What identities do you claim? What words do you use to define yourself?

4 thoughts on “The Exact Right Word: National Coming Out Day and Chosen Identities”