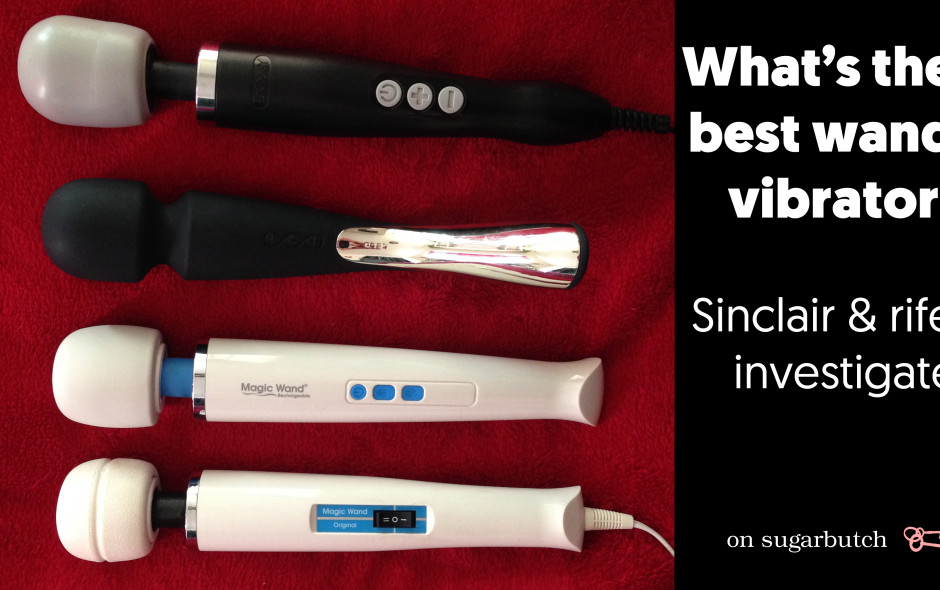 In general, I’m not much of a fan of vibrators.

The “luxury” vibrators started getting more and more popular in the last, oh, idk, 10 years or so, and there are a ridiculous amount of options for fancy, upscale vibrators that pulse in different patterns, that are rechargeable, submersible in water, made of gorgeous materials, and incredibly sexy designs. Still, in general, for me, the $100+ price tag is just too much and they will, inevitably, break, as they have tiny motors and detailed innards that just won’t work forever (unlike a leather flogger, that just gets more valuable as you break it in, or a silicone strap-on dick, which have lifetime guarantees from places like Vixen Creations).

I’ll admit, too, that the luxury vibes are often a little too … well, feminine. So I suppose I have a small bias there.

Plus, there’s just the way that my body works: I tend to need a lot of heavy stimulation. And … there’s something sexier about a static object: an object that only moves as an extension of me, of my arm, of my will, rather than something that has it’s own movement and agenda and volition.

Generally, wands are not a “well, if I work really hard, then I can get off with this toy” kind of toy. They are lazy toys. They are sit-back-and-take-it toys. They are toys for deep relaxing. I mean, hell, you can even use it on other parts of your body, like your feet or your shoulders, for really good muscle release. (I know, so novel right?) They are, in general, very intense—they often have a much higher power than any of the hand-held small vibrators, with a much deeper vibration. 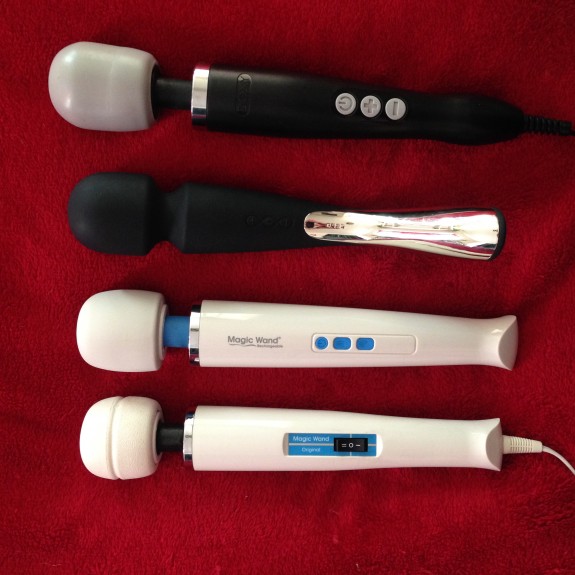 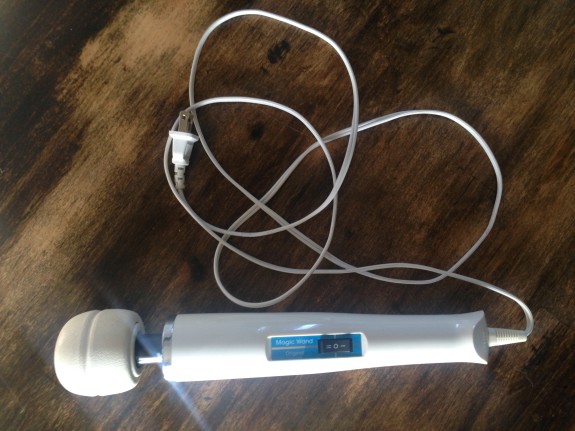 Ahh, the Original. It used to be called the Hitachi Magic Wand, but Hitachi wanted to pull it from the market (as they make tons of things other than vibrators, and they don’t really like having their brand name associated with sex toys), but agreed to keep making them if nobody would call them “Hitachis” ever again. I have a hard time not casually calling it a Hitachi—because, that’s what it’s been called for a dozen years!—but I try to think about it as an intentional transition and call it what it wants to be called. (I am glad the company is still making them, after all.)

When I asked rife his opinion, he said: “Everyone knows what this one is. It’s the go-to, classic, mother of all wands.”

It’s not particularly waterproof, however—if you’re someone who squirts a lot, it can easily seep into the motors of the Original and damage it. (I think rife and I have gone through two of them, and my best guess is that’s what did ’em in.)

If you don’t know it, this is probably the place to start. It’s teeth-rattlingly buzzy, and it has two settings: high, and OMFG AHHHHH. If you like a lot of stimulation or a lot of vibration, this one is for you. 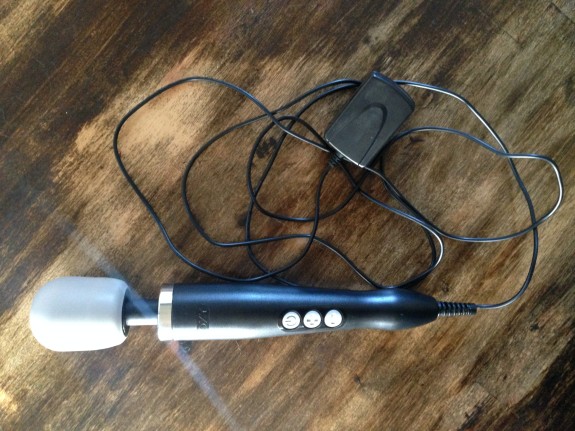 Erika Moen turned me on to the Doxy with her reviews on Oh Joy Sex Toy, saying that she loves the Magic Wand, but that the Doxy was even better. WHAAAT!? So I had to try it.

Unfortunately, it doesn’t do it for me at all. I don’t think I’ve ever actually gotten off while using this wand … I always get turned on, but then I just skip over the coming part and go right to the frustrated part, and I always end up wishing I was using the Magic Wand or even my hand.

It’s got a beautiful PVC head, which is bigger and softer than the Magic Wand, so I thought that would make the sensations less intense and therefore better, but somehow it is too soft and cloudy and not specific enough for me. It has a lot more settings than the Magic Wand—TEN of them total—but yet, they are too intense or not intense enough.

rife: “I got overstimulated WAY too quickly. Even the second to lowest setting was still way too much.”

Get this one if: You love your Magic Wand, but you want variable speeds or more power.

The body and head are slightly redesigned, too, to be a little sleeker and slightly better materials.

rife says: “I don’t miss the Original. I want this one. I’m so into the settings, it really helps me not to get overstimulated. It has the most foreplay built in, all the variable speeds and settings make it more “believable,” more like a human interaction than a morse code machine.”

While I like it, I don’t like-like it, if you know what I mean. I find myself wanting the Original, and not that into the settings.

This one wins, hands-down, for design. It’s so sleek and sexy. The silicone body is that velvety-smooth silicone like many of Lelo’s high quality sex toys, and it just begs to be touched. (I love that.) It also has this curve in it, unlike any of the others, and I am completely convinced that the curve makes it better. It can both curl under the pubic bone, just a little bit, and get the pressure just in the right spot, and for those of us who like to jerk things off in a hand-pumping kind of (dick) way? This is really good for that.

The vibration is my favorite, by far. It’s got more of a deep rumble than any of the others, rather than a superficial buzzy-ness. It also has a weird/interesting feature where it responds to pressure, which isn’t quite as cool as it sounds, but nonetheless makes it feel a bit more interactive. It seems to slow down when it receives more pressure, though, which is kind of strange—I want it to speed up.

It has 8 variable speeds, though I don’t find myself using those very often. I don’t quite have the overstimulation issue that rife reports. I just want it to be deep, rumbly, consistent vibration. And this? Yes, this. This is a major win for me.

And there you have it, folks!

I have definitely wondered if my body has just gotten used to the 12-plus years that I’ve been using the Magic Wand Original … I mean, how could it not? People definitely talk about getting “addicted” to it, or the ways that it makes other ways of getting off a bit harder. While I’ve seen studies that conclude that that’s not true, I also know people who swear by their own bodies that it is true for them, and I tend to believe the body’s truth over some study.

I hope that round-up is helpful. Honestly, I think they are all pretty incredible. I think the best way to really know if you’re into it or not is to go into a store and try them all out on your hands (or shoulders or other SFW place), and go from there. But I hope some of this background information was helpful for your decision making process. And hey, the holidays are coming up—might be time to put one of these on your wish list, or get one for your partner.

Last but not least … 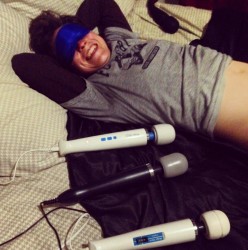 It is really hard to try out and compare a bunch of wand vibrators. I mean—I know, boo hoo, but also: after using one for even just a little while, I’m already turned on that it’s hard to have an unbiased review of the next one. And if I haven’t used one since yesterday or this morning, it’s harder to compare the sensation.

So, of course, I had to tie up rife and blindfold him, and use each of them on him in turn, playing with the settings and the intensities, to help have a better taste test of them all. (Well, it helped with his review of them at least. For mine, I’ve been testing and retesting for the last three months since I got ahold of all of them.)

That scene was so fun—and he was so giddy and silly, trying to describe the sensation to me while I was buzzing away at his cunt, that I had to shoot some video and keep questioning him. It wasn’t quite an interrogation scene, but maybe had a little bit of that feel. I’ll be putting up some of the video on Instagram in the next few days if you’d like to see it, it’s pretty hilarious.

Thanks to Doxy, Magic Wand Rechargable, and Lelo for sending me samples to review!