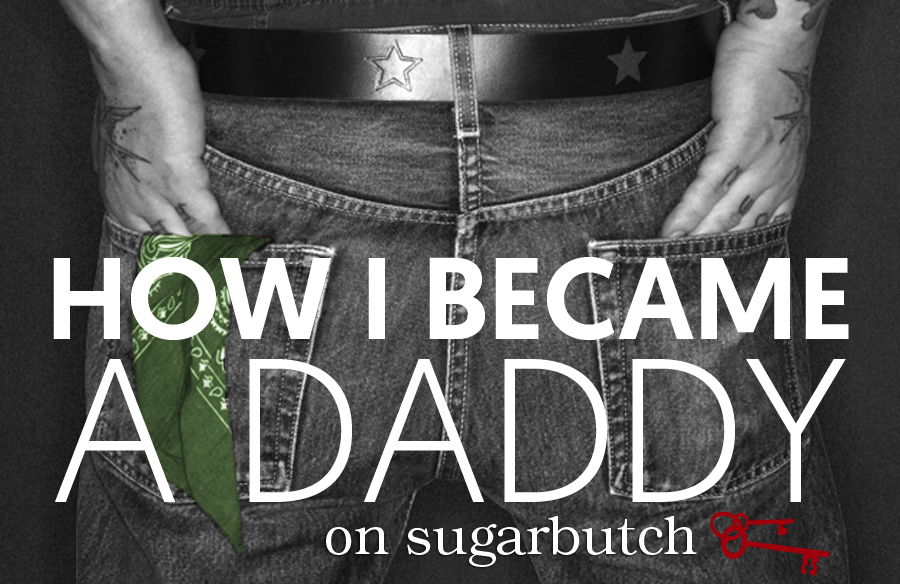 I came to be a Daddy in a dominance/submissive context somewhat reluctantly. For years, I’d heard about this kind of play in kinky relationships — particularly among my gay male friends. I felt a certain charge about it whenever it came up in conversation, but my charge mostly felt very negative: Why would people play with that? How was it sexy? Wasn’t it glorifying incest? How was it not about child abuse, on some level?

I remember very clearly the first direct conversations about it, which was about fifteen years ago now: my friend Greg was giving me a ride home, and somehow it came up in conversation. He was (probably still is) notoriously slutty, and always chatty about his sexcapades and adventures. In my memory, he’s the one who brought it up, but it could’ve been me — I’ve often been the one to eagerly stick my foot in my mouth around kink, asking all kinds of personal questions no matter how appropriate. But I like hanging out with other folks who like to talk about kink, and generally, they answer my questions.

“What is up with all this daddy stuff!?” I asked him. “I mean, how is it not about incest?”

Greg, level-headed and at least fifteen years older than me, answers slowly: “Well … it kind of is about incest. But it’s also about having an older male figure, in the gay boy communities. About having a positive male role model, and how so many of us lacked that as young boys, and how we still crave it.”

I sat with that answer for a good eight years, devouring all the lesbian erotica I could find, my favorites of which had daddy/girl overtones. Why do I like this so much? I’d ask myself. This isn’t something I want, it’s just something I like to read about, for whatever reason. My dirty little secret, the erotica I would never tell other people that I like. It’s wrong, I can’t justify it. But still … I must like it, I keep coming back to it.

For a while, a close friend of mine was a femme girl looking for a butch daddy. I remember those conversations with her clearly, too — and I was still pushing, asking poking questions. It seems obvious now that I was deeply drawn to the dynamic and couldn’t look away, but that I was also trying to work it out for myself.

“But what is it about the daddy/girl dynamic that makes it, you know, not incest?” I’d ask her incessantly.

“It’s just different,” she’d answer, somewhat vaguely. “It’s not about that, for me. It’s about power, and strength, and feeling taken care of, and submissive.”

That language, at least, I could grok. She’s the one who insisted I read Carol Queen’s book The Leather Daddy and the Femme, and that helped me get it even more.

Then, a conversation with a femme who identified as a babygirl I had a few brief dates with helped cement it for me. “Think of it as two different definitions,” she told me. “Like the word baby. We don’t mean literally ‘you’re a baby’ when we call our lovers ‘baby.’ But we invoke the sweet tenderness that word implies. Same with daddy. We don’t mean definition one: the man whose sperm helped conceive you, we mean definition 2: a masculine person who nurtures and cares for you, usually in the leather communities, where sex may or may not be part of the exchange.”

As a word person, it helped to parse the two definitions apart. It helped to start conceiving of this whole separate definition of what a “daddy” is, and how that relationship dynamic worked.

That babygirl femme and I didn’t date long, but our conversations around those concepts were a big turning point for me. I knew I wanted to explore them more. I finally thought, oh, I think I like that, that’s why I’ve been so drawn to slash repulsed by it all this time. Amazing how repulsion and desire can sometimes be two sides of the same coin.

So when Sarah and I got together, shared a lot of our fantasies with each other, and started to explore the realms of kink that we’d always wanted to or hadn’t yet, being a daddy came up for me early on.

It wasn’t an ultimatum, but I did think that it might end up being a dealbreaker.

“I just don’t get it. I mean why would I want to invoke my dad during sex?!” she said.

“It’s not about that. It’s only about you and me. And, in my opinion, we already have the kind of sex and play that I’m talking about. I nurture you, I call you baby and girl and sometimes little girl. You like all that stuff.”

“Yeah. I really do,” her eyelashes fluttered. “Really a lot.”

I grinned. “Honestly I think the only difference between what we do now and what I’m asking for is that one word: daddy.”

She looked pensive. “I’ll think about it,” she said.

The next time it came up, in a different discussion about kinks and explorations, and I mentioned again that I was interested in exploring it, she said, “I’ve been thinking about that. And I think I might just … say it, during sex, sometime.”

I had thought it was never going to happen with her. She’d been pretty clear about her disinterest.

She looked at me sideways, slyly. “We’ll see.”

It was a tease, but it totally worked.

A few weeks later, she did it: just casually let it slip from her mouth into my ear while she had her arms and legs wrapped around me, fucking her slow. It tipped me over the edge and I shuddered inside her, grabbing at her hair, toes curling, coming hard.

After catching my breath, she giggled. “I guess we know what you like!”

It was almost embarrassing, so vulnerable to be known and seen like that. To be splayed wide open, even in front of someone I trusted most in the world. But her eyes were warm and I could see that she liked it, too, and that we were in this together.

5 thoughts on “How I Became A Daddy”